'By the time actual action began, it was already too late.'
'The virus was raging.' IMAGE: Inayat Ali offers prayers after performing the last rites of a person in Jabalpur, May 13, 2021.
Inayat says he has helped cremate about 1,200 bodies, most of them being COVID-19 victims, since the outbreak of coronavirus last year. Photograph: PTI Photo

"India was fortunate to escape the fatality and severity experienced by countries like the USA, the UK and Italy in the first wave."

"This fortunate collective escape led to the misconstrued notion of complacency among every stake holder -- government, policy makers and to some extent, few in the scientific community who started talking about herd immunity."

"As a result, the second wave which was inevitable and could be foreseen seemed to have surprised everyone," says Dr Vikash R Keshri, an expert in public health and health policy.

Dr Keshri is currently senior research fellow at the India office of the George Institute of Global health, a global medical research institute headquartered in Sydney.

An alumnus of the Mahatma Gandhi Institute of Medical Sciences in Wardha, he has also trained in health analysis from the Institute of Tropical Medicine in Antwerp, Belgium.

In a public health career spanning more than a decade, he has worked in diverse roles in many states of India, including around 6 years in Bihar.

"Bihar has 38 districts with an average population of 3 million in each district. There are countries with a population of 3 million! When we have such large populations in districts, it is not practical to rely on the diktats of the state or Centre to do what you are supposed to do. Guidelines are fine, but some level of local planning is essential," Dr Keshri tells Rediff.com's Archana Masih.

With your experience in public health, what have been some of the primary observations in the way India has responded to the second wave of COVID-19?

The second wave of COVID-19 was inevitable. History has shown us that a pandemic generally doesn't stop with the first wave.

India was fortunate to escape the fatality and severity experienced by countries like the USA, the UK and Italy in the first wave.

This fortunate collective escape led to the misconstrued notion of complacency among every stake holder -- government, policy makers and to some extent, few in the scientific community who started talking about herd immunity.

As a result, the second wave which was inevitable and could be foreseen seemed to have surprised everyone.

There were enough indicators of a second wave because cases had started rising in Kerala and Maharashtra. It was inevitable that the infection would spread to other parts of the country and become a pan-India phenomenon.

We underestimated the virus. We did not learn from other countries. We were caught off guard.

By the time actual action began, it was already too late. The virus was raging.

Preparedness could have helped us face the second wave better.

How has India fared since?

We started late and are now facing 3-4 lakh cases every day. If 10% of these patients need hospitalisation and 5% need some kind of critical care, it poses a huge burden on the health infrastructure.

The focus is on saving lives -- from doctors to family members to the community. Rightly the focus shifted to getting minimum life-saving support, so that those who could survive can be saved, the public health response has taken a back seat.

Other aspects of public health like prevention and control are low in a priority for policy makers.

The only preventive aspect of public health that everyone is currently focused upon is vaccination.

This has helped in removing vaccine hesitancy, but there is an acute shortage of doses. There is no concentrated effort to focus on community transmission in rural area. 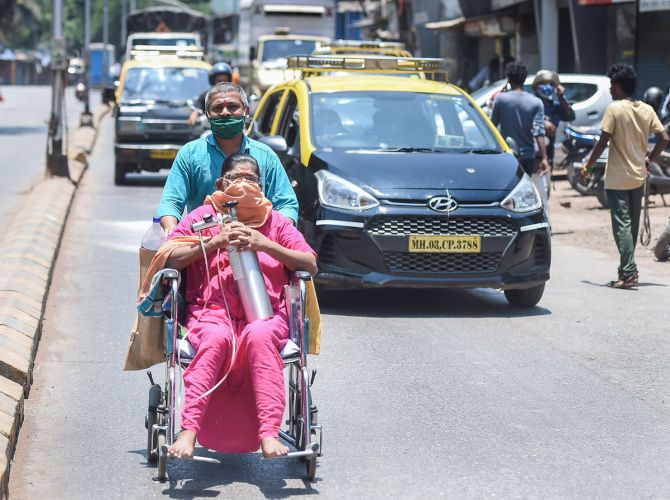 IMAGE: A patient with breathing issues carries an oxygen cylinder on her lap while being taken home after her discharge from a hospital in Mumbai, May 11, 2021. Photograph: Kunal Patil/PTI Photo

You have said before that there has been on over reliance on AIIMS-Delhi for providing all wisdom in dealing with COVID-19 over other government-funded health institutions.
What are some of the other institutes whose expertise has been overlooked?
How would their inclusion have aided the response?

There is an over reliance on a few central institutions located in Delhi for everything. India is a large and diverse country. We can't depend on one institution which is centrally located, but is geographically far from most of India.

You can't rely on the wisdom of experts from one institute because they may not have the answers to everything.

I have reviewed composition of the committees on health since Independence and this pattern is visible throughout. All the task forces, committees, panels comprise members from central institutes located in Delhi.

There are a variety of experts with proven credentials. The government should identify experts from various institutes who can help in dealing with this pandemic.

Drawing expertise from other parts of India will also bring perspective from various geographical areas. It will bring not only subject expertise, but geographical expertise and greatly help in formulating policies for a vast and diverse country of 1.4 billion people.

Secondly, any health response team, committee or advisory group is very heavy on clinicians with hardly any public health expertise.

COVID-19 is a public health problem because more than 80% cases are in the community. Only 10-15% patients need hospitalisation and a very small proportion need critical care.

Hence, the response should equally focus on prevention, control and treating people at home.

Any committee on COVID-19 should have an equal proportion of public health practitioners and clinicians. 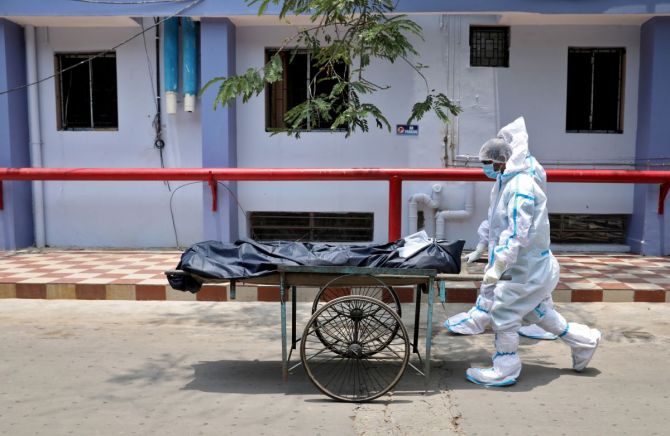 IMAGE: Healthcare workers transfer the body of a COVID-19 person inside a hospital premises in Kolkata, May 12, 2021. Photograph: Rupak De Chowdhuri/Reuters

You have also spoken about a health panel in each district to deal with COVID-19 -- can you explain who should be part of such a panel and what should its role be?

Any response to a pandemic should be localised and guided by a district level expert panel. They should be empowered to take decisions. This will relieve the overburdened district magistrate/collector and also prevent bureaucratic delays.

The panel should be a multi-disciplinary team, comprising officials from different departments -- panchayati raj, women and social welfare department, public representatives, etc. This committee should be empowered to make plans and execute them.

In India, one district has a population of 1 million-2 million.

When we have such large populations in districts, it is not practical to rely on the diktats of the state or Centre to do what you are supposed to do. Guidelines are fine, but some level of local planning is essential.

Different districts may have their own set of problems and opportunities that can help them make a better plan for themselves. 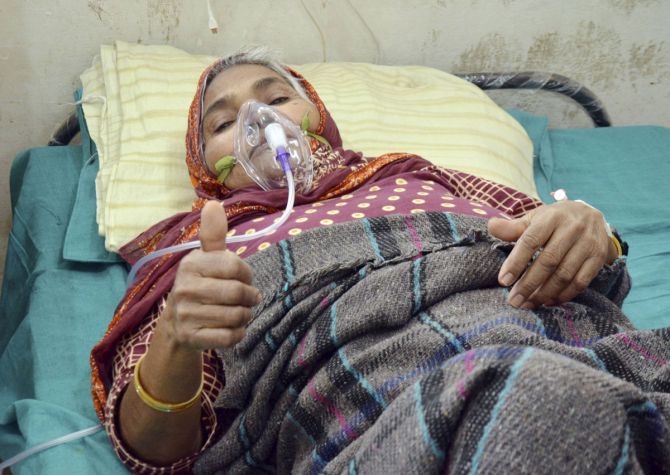 IMAGE: A COVID-19 patient shows the victory sign as she fight against the coronavirus disease at a hospital in Ranchi, May 11, 2021. Photograph: PTI Photo

Do we have trained public health professionals in the districts?

In Maharashtra, all district health officials are doctors with public health qualifications. To some extent this is true for Tamil Nadu, Kerala and Karnataka and some other states are also experimenting with this.

A state like Bihar may not have officials with actual qualification in public health, but they have district immunisation officers and other programme officers who deal with public health.

They are aware of the strengths and weaknesses and can be identified. They may not have a degree, but have experience.

How is the Covid situation in Bihar? How has the state dealt with the second wave?

The situation in Bihar is worrying. The state is reporting more than 10,000 cases since April 23 and there are more than one lakh active cases.

These are reported numbers; the actual numbers could be much higher.

There is a scarcity of testing. The state is depending more on the Rapid Antigen Test. The RT-PCR test considered the gold standard test is conducted in lower in numbers.

The testing has remained almost constant, but cases have increased almost 6 times.

Every one case has multiple contacts who are exposed to infection, if they are not tested and isolated, then cases are bound to multiply. There may be many who are asymptomatic patients who are infected.

The positivity rate is very high. 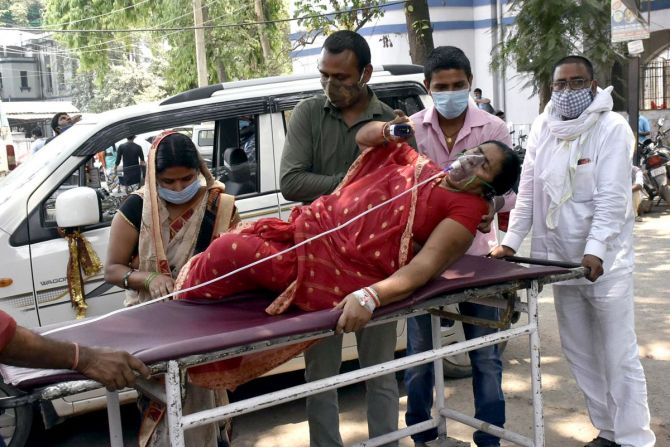 IMAGE: A COVID-19 patient arrives at a government hospital in Patna for admission, May 3, 2021. Photograph: ANI Photo

How is Bihar's health infrastructure catered to deal with the pandemic?

The health system in Bihar is very fragile and limited. When it is limited, it is bound to break.

The public health in the state is geared to provide primary care and very selective secondary care in most districts.

The district health system is mostly involved in routine care like maternal and child health -- along with national programmes like TB control.

People go to the OPD level care to primary health centre and the district hospital for getting some routine treatment and medicines. Except for a few medical colleges in Patna and 1-2 other districts, services for critical patients is very limited even during peace time -- so you can imagine what it must be during a pandemic.

Access to critical care is very limited in the private sector as well. Except in Patna there are no good private hospitals in the peripheral area. For critical and life-saving illnesses, patients either go to Patna or to Delhi, Mumbai, Bangalore, etc.

Around 5% of Covid patients need some form of critical care and if you count the ICU beds -- excluding Patna -- 400-500 beds would be an optimistic estimate.

With a limited health infrastructure, Bihar should have anticipated the Covid crisis and focused on preventive public health.

With 90% of its population living in villages, Bihar fortunately has a very strong community system. It has a good network of ASHA and anganwadi workers along with network of self help groups.

Bihar's strength lies in the prevention aspect. Currently, the pandemic has reached a panic situation with the curative taking over from preventive, but going forward this is what Bihar should focus on.

Disclaimer: Opinions expressed are personal in nature and might not necessarily be subscribed by the institution/affiliation.