'Don't forget there are 180 million Muslims in this country'

'Muslims are depressed and disillusioned.'
'The safety valve is that we still have a multicultural mosaic in West Bengal, Tamil Nadu, Karnataka and Kerala.' 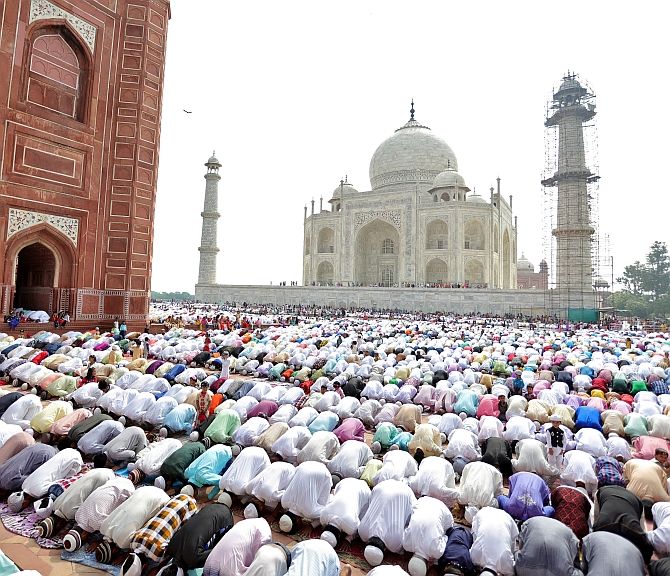 At the height of the Babri Masjid-Ram Janmabhoomi agitation, journalist and author Saeed Naqvi posed a question to a packed audience at Allahabad University.

'Have the Hindus in this audience ever seen the inside of a Muslim home?' he asked.

None of them had. The response was similar when he asked if any Muslim in the audience had ever seen the inside of a Hindu home.

'At that moment, a truth hit me. We have lived in a state of uninstitutionalised apartheid for decades, even centuries,' Naqvi says in his latest book, Being The Other: The Muslim In India.

Not at all! In fact, in my book, what I have tried to do -- I hope I have succeeded in trying to do that -- is to urge people to take a look at history retrospectively once again.

Certain truths, which became clichés over time, have been handed down to us.

It has been done several times, but now we have some more material in the form of transfer of power documents (from Britain to India and Pakistan) that Professor Nicolas Mansaergh and his battery of historians has put together in 12 volumes in a library in Britain.

We may be able to diagnose the mistakes, find out who made them and assess whether reappraisal can be done. That's because optimism is only possible if we know what the malaise has been.

The way things are going is not perfect.

Things have been going downhill since the 1990s.

If we let this continue, we will inexorably be moving towards catastrophe.

Why do you want to go back in time to have a relook at Hindu-Muslim relations?

Because this will not end! You will continue to be invited to eat cow dung with urine paste.

Mohammed Akhlaqs will continue to be killed and a huge manthan (churning) will be on with Dalits and others getting into it.

This country will not be at peace unless we diagnose what has gone wrong.

Let me not impose simplicity on a very complex situation. I have arrived at a diagnostic model.

In 1947, we trapped ourselves in a triangle.

Imagine a triangle and New Delhi-Srinagar, India-Pakistan, Hindu-Muslim as its three angles.

If you want to settle Kashmir, you cannot simply do it on your own. You have to bring in Pakistan.

When that happens the Hindu-Muslim temperature in India will come down, which is what you want, but the politicians don't.

That is the trap.

Today, Kashmir is in focus and people are coming out with solutions -- the usual solutions that we have had for the last 50 years. Those will not work.

Is there a political body looking at things holistically? No, there is nobody and they will not. So who will?

Give us that space for sensible debate so that views can be considered by everybody in that public arena.

Everything has shrunk; debates have shrunk.

Solutions will come through when the nation is engaged in a debate on these issues and then politicians will begin to respond.

Where is the free press? Today, the politicians and businessman have muzzled the media. Commercial interests now play a big role.

Today, you see a battle going on between (television anchors) Barkha Dutt and Arnab Goswami; where is the space for sensible debate?

I am not asking anyone to stop Arnab or Barkha, but let there be a sensible public service media. That will be the beginning. 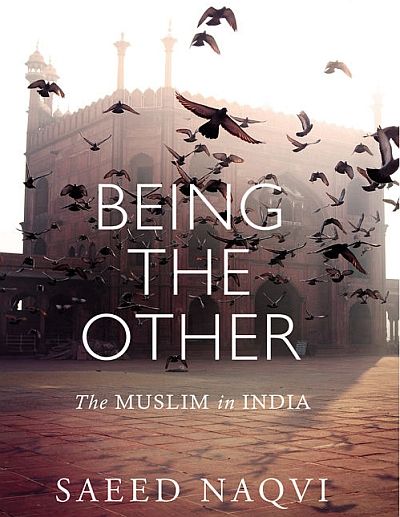 You made a startling revelation in your book that Indians were never taught about the massacres of Muslims in Jammu who were 61 per cent of the population.
Do you feel Indian politicians of that time cheated the Kashmiris by talking about secularism?

The whole project looked suspect from the beginning.

Remember, I am from Awadh; my village is Mustafabad.

My uncle was the first Congress MLA from Rae Bareli. All the business of the Nehru-Gandhi parivar, the owners of Rae Bareli, is invented history.

I come from there. What was my culture there? My grandmother and my mother wore a sari; we were part of Ganga-Jamuna tehzeeb.

Jawaharlal Nehru was an icon. We could never call him Jawaharlal by his name, but Panditji. He had to be Pandit Nehru.

That is how we respected him and therefore we placed all our eggs in his basket.

We never expected the rest of the Congressmen to look after Muslim interests.

All along we were told that there will not be a Partition, but it happened suddenly.

Maulana Abul Kalam Azad wrote then that if Partition were to happen what will remain in India will be an 'unadulterated Hindu State.'

Was he right or was he exaggerating?

After the Akhlaq incident? After Babri Masjid? After the riots kept happening and the police stood their ground... Who was right?

A lot of your anger seems emerge in your book...

I do not think it is anger. In fact, I am moderating and saying that, look this is a wonderful country.

I personally had a ball in this country. I have travelled to 110 countries; I have written for every newspaper possible.

Whichever Indian prime minister went to Bangladesh or Pakistan, I was always invited to accompany them.

I was personally not affected, but then I have to look at the situation around me. I cannot be selfish.

What is happening in Gujarat? Muzaffarnagar? All these things are very disturbing images.

Unless we look at the very beginning, we will continue to fool ourselves.

Don't forget that there are 180 million Muslims in this country, a little more than the population of Pakistan.

You already have the Rajinder Sachar Committee report that states that Muslims are below the Dalits.

But the prevailing impression these days is that the Muslims were appeased by the Congress?

If they appeased the Muslims, the consequences of that appeasement are there to be seen in the Sachar committee report.

Look at the Justice B N Srikrishna report on the Mumbai riots of 1992-1993. The politicians' names are there (in the report), but they have been brushed under the carpet.

Your book gave me the impression that by making a secular argument, Nehru fooled the Muslims who stayed back in India after Partition.

I didn't say that.

But that is what I felt after reading your book...

Some feel this way. Mikhail Gorbachev wanted to reform Communism. He lost control. He did not realise that his successors were thinking differently. The result was the USSR's liquidation.

Nehru was a remarkable man and we adored him. His successor Lal Bahadur Shashtri went to war with Pakistan, but also turned to the RSS (Rashtriya Swayamsevak Sangh) leader Guru Golwalkar for a civil defence treaty.

Today, the biggest statue of Sardar Patel in the country has been not been conceived by the Congress party, but by Prime Minister Narendra Modi in Gujarat.

Rajeshwar Dayal, the first home secretary, discovered that Gobind Ballabh Pant was soft on Golwalkar. It is there in his book, A Life of Our Times.

Other than Nehru, there were not many people in the Congress Working Committee who looked at Indian Muslims with sympathy.

Considering Nehru was a very clever and intelligent man, did he not know that there was nobody around him who would carry this community? It was a two-way mistake.

Our elders erred by placing all our eggs in Nehru's basket and the latter made the mistake of giving us the impression that he could somehow carry through a secular India.

Do you think young Muslims are disillusioned with India today?

Muslims are depressed and disillusioned. They look at the world differently.

There are two different tectonic plates moving parallel. One is represented in the Urdu press and another in the Hindi press.

The safety valve is that we still have a multicultural mosaic in West Bengal, Tamil Nadu, Karnataka and Kerala.

Is this the reason why some young Muslims are joining Islamic State?

This is absolutely cock-and-bull. How many Muslims in India have joined IS?

Only 50 out of 180 million Muslims. How many have joined in England and America?

In fact, the war on terror has been counter-productive. There is a chapter on this in my book, which is worth reading.

After the Soviet Union collapsed, the West thought they had to target something else. Have you heard of any form of terror around before that?

Suddenly, the entire Muslim world became bad. They became terrorists. You go and destroy a civilisation like Iraq and you destroy Libya.

And you think people who have lost their homes and families will sit back?

The war on terror has created the biggest migration and exodus in history since biblical times.

Nothing that of sort has happened in India; here the story is of slow death.

When the Allies were bombing Afghanistan in October 2001, Modi was not even chief minister of Gujarat.

He is the first leader who took total advantage of the anti-Muslim atmosphere in the world in the guise on the war on terror.

He thought, at that moment, there was global legitimacy on that kind of posture.

Anything that would happen in Gujarat would therefore have to be muscled and it was.

You wrote that Muslims are squeezed in a mythical communally charged past glory versus an India of rational enlightenment that is gentler and egalitarian. What does the future beholds for them in India?

Muslims across the world at the moment are in a trap. They have to come out of the clutches of the clergy.

And politicians in India won't let that happen because they negotiate the terms of the Muslim vote with the clergy.