'Watch who will be leaving the Congress in days to come'

'Why are the people who stood with the Congress through thick and thin, why are they leaving?' Digambar Kamat is an eight-time MLA from Goa's Madgaon constituency. He was also the state chief minister from 2007-2012.

"Do you think a person of my stature, after all the humiliation, should stay there (in the Congress)?" Kamat asks Prasanna D Zore/Rediff.com, explaining why he quit the Congress along with seven party MLAs and decided to merge with the BJP.

Why did you quit the Congress and join the BJP?

For last so many months I have been observing that the Congress doesn't have any proper (central) leadership.

They are not taking any decision by consultation. All their decisions have been arbitrary.

In fact, in 2017, when we got elected 17 plus one, and had 18 MLAs, we could not take a decision (on) who should lead the party (in Goa) and we lost the opportunity of forming a government. That shows the utter weakness of the leadership.

I led (the Congress in Goa) from the front (in the 2022 assembly election) but after the elections, they unceremoniously removed me from the party and made somebody (Leader of the Opposition Michael Lobo who had quit the BJP just before the February 2022 election and joined the Congress).

Is that not humiliation?

But didn't they make you a member of the Congress Working Committee?

CWC position I said thank you (he rejected it). I know what position it is.

A person who is a man of the masses, a face of the Congress party (in Goa) they didn't even declare me as the chief ministerial candidate at the time of (just before) the election.

Nobody bothered or had the courtesy to call me or come and meet me; they (Dinesh Gundu Rao, the Congress leader in charge of Goa) came here... Mukul Wasnik came here, but nobody thought of consulting me on what was going wrong for us in Goa.

They were least bothered... 'You want to go, you go... like that'. That has been their attitude.

Who do you blame for this fiasco in the Congress party in Goa?

Right from the (opportunity of) formation of government in 2017 onwards not a single proper decision was taken by them. Nobody knows who to blame for the situation in Goa today. We also don't know.

Sonia Gandhi was a different type of person. I worked with her when I was the chief minister. She was at least able to take decisions. She used to consult and take decisions.

Now no decisions are being taken or they are taking only arbitrary decisions. 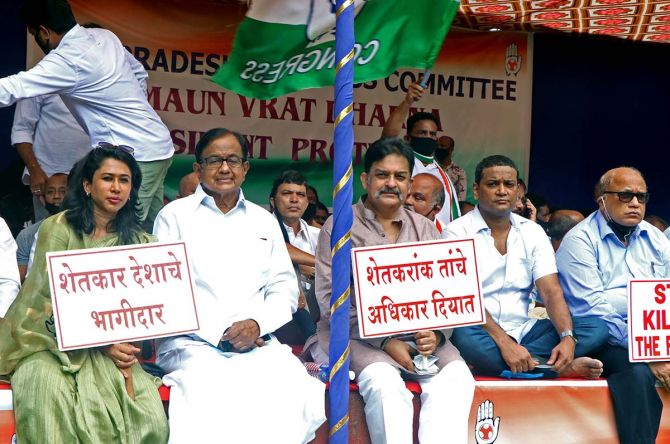 IMAGE: Congress leader P Chidambaram along with Digambar Kamat (seated, right) and other party leaders at a silent protest over the Lakhimpur Kheri violence at Azad Maidan in Panaji, October 11, 2021.

There has been lot of criticism about your going to temples dargahs, and churches, taking an oath to remain loyal to the Congress...

(Interrupts) I have not taken any oath. I went to the Mahalakshmi remple along with all the (Congress) candidates (before the February 2022 Goa election) and whatever the priest said we repeated.

When this situation arose (of eight Congress MLAs joining the BJP) I asked the Devi (the deity at the Mahalaxmi temple) for a kaul (a practice of asking the residing deity to guide one during difficult times; the deity, it is believed, responds by dropping flowers to respond to the believers' call for guidance); in Goa there is a tradition to ask for prasad or kaul.

I asked Mahalaxmi Devi whether I should join the BJP in such a situation, my workers and supporters are urging me to do so. I asked Her if I shall go ahead with this (join the BJP) or remain at the same place (Congress).

And the Devi gave you the kaul to join the BJP?

Yes. That is what happened. A flower fell from the deity's offerings (an indication that the deity has given the kaul to Kamat to join the BJP).

While the Devi gave you the kaul and your supporters urged to join the BJP, did you ask your voters -- who voted to defeat the BJP candidate against you and for electing you -- if you should stay with the Congress or join the BJP?

When I came back from Delhi (after meeting the central BJP leadership) the welcome that I got was so arousing. My workers were dejected, they were totally frustrated. They told me that we will not work for Congress anymore. You take a decision.

Would Madgaon voters who elected in you in 2022 and who have been electing you since 1994 trust you now?

I am contesting and winning this seat for the eighth time since 1994.

So you are very sure your voters will not desert you in 2027?

(Madgaon) voters have always been with me.

I have always said that so far as people of Madgaon have their blessings with me, as long as the gram daivat (the residing deity of Madgaon) Lord Damodar is with me and so long as they wish that I should contest I don't care for anybody. IMAGE: Digambar Kamat, then the leader of the Opposition in the Goa assembly, with supporters during a bicycle protest against the rise in fuel prices in Panaji on July 17, 2021.

You are being criticised for joining the BJP for personal gain...

This time too, you had a two-thirds majority when eight out of 11 Congress MLAs decided to join the BJP.
With this majority there was no fear of inviting the anti-defection law and yet you decided to merge with the BJP and not form a separate party or group. Why?

This decision was based on legal advice.

You could have easily formed a separate party and sat on the Opposition benches...

Basically, we (all eight MLAs who quit Congress in September 2022) felt that the work done by Prime Minister Narendra (Damodardas) Modi was helping India on the path of development; our image in the world has improved tremendously after he became the PM in 2014.

He is making India a superpower. Respect for Indians has gone up tremendously (after Modi came to power). My friends from Australia, New Zealand, US and Europe call and tell me that today Indians are being looked at with respect.

He has definitely made a difference and I feel that Goa should not left behind when it comes to development.

So, we thought of strengthening the hands of Modiji and our chief minister (Pramod Sawant) by merging with the BJP. 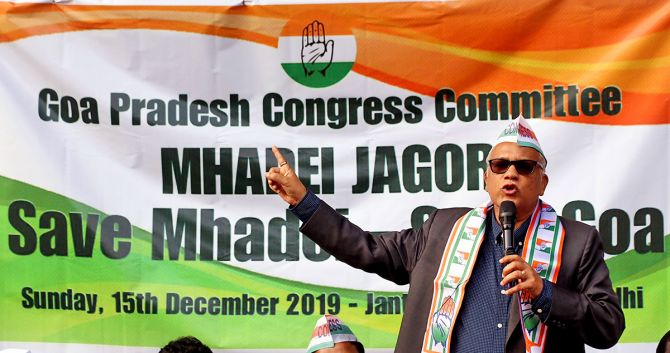 IMAGE: Digambar Kamat addresses Congress activists at a protest in New Delhi, December 15, 2019, against the environment clearance granted to the Kasla-Bhandura project and diverting the waters of the Mahadayi river in Goa.

Would you now support the rail corridor, the double-laning of highways?

In March 2022 you had told me that the Congress is not afraid of BJP poachers. What changed between March and September?

I have already answered your question. The way they have treated me; they humiliated me.

Do you think a person of my stature, after all the humiliations, should stay there (in the Congress)? They don't even know how to treat their senior most leaders.

You go through the five-page letter written by Ghulam Nabi Azad (to Sonia Gandhi) and you will realise (how the Congress leadership humiliates its senior leaders).

During his Bharat Jodo Yatra Rahul Gandhi has said that the eight Congress MLAs merged with the BJP because they couldn't face the threats or they could not stay away from the BJP's temptations offered to you. Would you like to respond to this comment from Rahul Gandhi?

He is only making (such empty) statements. They don't want to introspect as to why people are quitting the Congress.

If they want to save the party, then there is no point in simply making allegations against the BJP. Only introspection can save the Congress.

Why are the people who stood with the Congress through thick and thin, why are they leaving?

You see the people who have left them and watch who will be leaving the Congress in days to come.

The Congress allegation is that BJP paid each of the eight MLAs who defected to merge with them Rs 40 crore-Rs 50 crore. Is that true?

Would you find any place in the Goa cabinet? Would you be the deputy chief minister?

I have not asked for anything; I will not ask for anything. My joining (the BJP) is unconditional. I have told him clearly that whatever responsibility comes my way I will accept that.

And so will the seven Congress MLAs who have moved with you?

How can one put conditions on them?