'Many sepoys fought with distinction, winning some of the first Victoria Crosses to be awarded to Indians; and indeed, as in any army fighting under such inhumane conditions -- standing in the freezing sludge, with shrapnel tearing through bodies and being subjected to gas attacks -- some buckled under pressure,' Santanu Das tells Vaihayasi Pande Daniel/Rediff.com 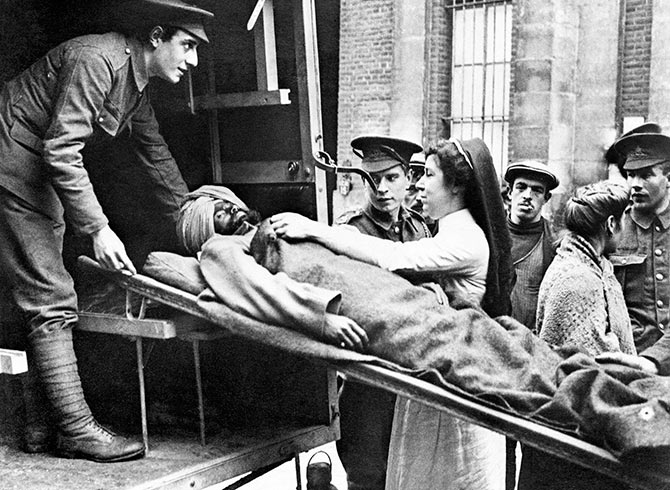 Image: A nurse adjusts the blanket of a wounded Indian soldier, as the stretcher on which he is lying is lifted and placed into a motor ambulance somewhere on the Western Front, World War I. It's a part of Indian history that glossed over, almost forgotten.

How many of us recall today that over one-and-a-half million Indian soldiers fought under the British flag or that nearly 60,000 to 70,000 of these brave, unnamed men lost their lives on the battlefront?

It was a subject that fascinated Santanu Das (seen left), academic and award-winning author.

The result of Das's research is his most recent work, 1914-1918: Indian Troops In Europe (external link), a visual history based on rare archival photographs from Europe and India.

In this, the second part of his interview to Vaihayasi Pande Daniel/Rediff.com, Das talks about the important role of the Indian soldier in World War I, he describes how the sepoy felt about being parachuted into strange lands to fight for an shadowy cause.

Many of them found these new places delightful and beautiful and were bowled over by the warmth of their hosts. All sorts of cross cultural friendships bloomed.

Were the Indian soldiers well trained and prepared to cope with the kind of warfare that took place on the battlefields of World War I?

The Indian soldiers were more used to 'small' wars on the North West Frontier Province and were not just trained adequately for the mechanised industrial warfare they would be thrown into at the Western Front at a month's notice.

As part of the British colonial policy -- and with memories of the Sepoy Mutiny -- their training and equipment were deliberately kept a generation back.

It was only after they had reached Marseilles that their Lee-Enfield Mark II rifles were replaced by Mark IIIs. Many of them, having arrived in their cotton tunics, did not initially have even proper warm clothes!

Under the circumstances and in light of the substantial disadvantages they suffered from, they adapted quickly and performed remarkably well.

Their performance on the Western Front has been the subject of debate -- given their failure to take substantial ground and the occasional fluctuation of morale -- but as recent military historians have argued, they had a sharp learning curve in 1915 and their performance was widely admired by their British superiors at the time.

Image: Indian soldiers during a gas mask drill during the first World War.

How did they fare on the Western Front? Were they courageous and did they add value to the British side in Europe? Can you say they contributed to the victory of the Allies?

The IEF 'A' arrived at a critical time when the British Expeditionary Force was severely overstretched. Douglas Haig reportedly told Sir Walter Lawrence that 'The arrival of (the Indian Corps) saved the situation by filling a gap.'

From October 23 to the end of First Ypres in early November, the Indian Corps held around 12 miles or one third of the whole British line and suffered heavy casualties in shallow trenches which were little better than ditches. Their contribution was absolutely vital to holding the British line at a time when Ypres was 'trembling in the balance'.

On March 10-12, 1915, in the battle of Neuve Chapelle, the Indian Corps formed half of the fighting force and held their ground with machine gun and rifle fire. 'Bodies upon bodies and blood flowing. God preserve us, what has come to pass,' wrote a sepoy on March 18.

In 1915, the Indian Corps also took part in the battles of Second Ypres, where they came under gas attack, as well as Aubers Ridge (May 9), Festubert (May 15-25) and Loos (September 25 to mid-October).

After the departure of the infantry in the winter of 1915, the cavalry stayed back and were engaged in a variety of dismounted trench-holding duties. They briefly saw action in the Battle of the Somme in 1916 and at Cambrai in 1917. In 1918, they were sent to Egypt.

Many sepoys fought with distinction, winning some of the first Victoria Crosses to be awarded to Indians; and indeed, as in any army fighting under such inhumane conditions -- standing in the freezing sludge, with shrapnel tearing through bodies and being subjected to gas attacks -- some buckled under pressure.

Indeed, in the autumn of 1914, there was a substantial number of hand wounds in the Indian camp and a number of them were alleged to be self-inflicted -- the traumatised response I guess to the first shock of industrial combat.

I think that the whole rhetoric of 'courage' and 'cowardice' is very limiting and deeply problematic; it is high time we go beyond these reductive and unhelpful categories and instead try to understand the nature and complexity of the experience.

Image: Two officers of an Indian mule company in Gallipoli, 1915.

What was happening behind the battlefields was often more interesting that what was happening in the frontline. For, at the back of the front, a whole range of cultural encounters -- from fleeting glimpses of the local French and Belgian people at towns, fields and markets to sustained relationships with men and women the Indian soldiers billeted with -- were taking place.

A whole new world -- of travel, adventure, encounters, and intimacies -- was opening up for these men in which wonder, thrill, excitement, fear, loneliness and trepidation were all fused and confused.

'No country is like the country of France' one sepoy opined while another firmly concluded that, after seeing France, there is 'no need' to see England. France is often compared to 'paradise' and 'fairyland'.

In their letters, the sepoys write about a wide variety of topics, from initial wonder at the agricultural and technological modernity of France to occasional thrilling accounts of romance and sexual braggadocio to the trauma of the trenches. Many billeted with French families and they recall the kindness and warmth of the local people, 'as if we were their private guests'.

The imperial war opened up the world of travel and encounters for these poor peasant-warriors: In Egypt, they went to see the pyramids; in Gallipoli, they shared chappatis with the Australians; in Macedonia, they exchanged coins with Greek labourers; and in Mesopotamia, a North Indian sweeper Jumman even adopted a recently orphaned Armenian boy found crying near a well.

In fact I'm directing an international collaborative research project (external link) funded by Humanities in European Research Area on Cultural Exchange In The Time of Global Crisis: Colonials, Neutrals And Belligerents During The First World War where you will find more information (and photographs) on this subject.

What did they understand about the war? What were their special perspectives or impressions?

Of course, it was a traumatic experience for them and we should not over-emphasise cultural difference when it comes to universal human suffering. It is essential to acknowledge the intensity of their horror rather than try to weave a triumphant narrative of military glory.

In fact, as with every army of the Western Front, the concept of glory exploded amidst the mud and mutilation of the trenches.

Let me just quote you a letter from Havildar Abdul Rahman, written on May 20, 1915, from France and quoted in David Omissi's collection of Indian letters:

'Cannons, machine guns, rifles and bombs are going day and night, just like the rains in the month of saawan. Those who have escaped so far are like the few grains left uncooked in a pot.'

'The state of things is indescribable. There is conflagration all round... No one can extinguish it but God himself -- man can do nothing.'

Image: Indian soldiers wait for food at an improvised cookhouse at a camp near Querrieu in July 1916.

Were some soldiers taken prisoner? What happened to them in enemy prisons?

Around 1,000 Indian soldiers were taken prisoners of war in Europe. The Indians captured on the Western Front were taken to various POW camps but later grouped together at the twin camps of Zossen (Weinberglager) and Wünsdorf (Halbmondlager or Halfmoon Camp), south of Berlin.

The Wünsdorf camp was singular in two respects: It was a showcase, propaganda camp where the Indians were subjected to sustained anti-British propaganda; it also became the site for serious ethnological research.

Moreover, a number of sound recordings of the South Asian prisoners were done by the Royal Prussian Phonographic Commission. The POWs were often asked to stand in front of a phonograph and asked to read a text, recite a poem or sing a song. These sound recordings remain some of the most poignant testimonies of the war.

The number of Indians taken prisoners was far higher in Mesopotamia.

After the surrender of Charles Townshend on April 29, 1916, after the infamous siege of Kut, a large number of Indians from the 6th Division were made prisoners. The precise number is not known but, according to the most reliable source, the number of Indians captured was around 10,440.

They were forced to undertake a traumatic 500-mile long trek from Kut via Baghdad and Mosul Samarra to Ras-el-Ain and many died on the way.

The Muslim prisoners were often given preferential treatment while the Hindu, Sikh and British prisoners were employed in the construction of a railway line at Ras-el-Ain and were subjected to back-breaking labour.

Image: Indian soldiers bathing in the River Auja, Palestine, in the summer of 1918.

What are your thoughts on the centennial commemoration we are witnessing of India's contribution to the First World War?

There is a swell of interest in the South Asian war experience -- from the government level at Westminister to military think-tanks such as the United Services Institution in New Delhi to community leaders, particular families, enthusiastic individuals and scholars.

There have been a range of events -- from international conferences and publications to wreath-laying ceremonies and governmental delegations.

In the Indian media too, there is a steady flow of articles.

In Great Britain, there is significant interest, from governmental initiatives -- the biggest of the commemorative services held in the UK on August 4, 2014, was the one at Glasgow to remember the Commonwealth troops and was attended by Prince Charles and the prime minister -- to various television and radio programmes, exhibitions and community projects.

It is important to remember, in the light of these commemorative activities, that the Indian army was a multi-racial, multi-religious and multi-lingual institution, spread across India, Pakistan, Bangladesh and Burma.

It is essential to recognise this ethnic, cultural and religious diversity.

Moreover, a space should be created to remember the nationalist revolutionaries who fought for the country's freedom during the war years and that handful of pacifists -- like Rabindranath Tagore who condemned the war -- as well as the women and children who suffered.

A hundred years after its outbreak, commemoration, like memory, has to be inclusive and multi-directional.

At the same time, a space should also be made available for reflection and critique rather than simple remembrance.

While there were pockets of intimacy and affection between individual sepoys and British and European men and women, many of the imperial ideologies and racist institutional structures were unfortunately in place. We cannot afford to forget or whitewash these painful and unattractive aspects.

These are histories of trauma and bloodshed. While it is essential to challenge the colour of war memory, it is also important to keep a careful watch on the way it is being done: There is much to commemorate, recover and understand, little to 'celebrate'.

If you have any Indian First World War anecdote, papers or objects, please feel free to contact him at santanu.das@kings.ac.uk

1914-1918: Indian Troops in Europe, by Santanu Das will be published (external link) in the US and Europe on September 25, 2015, to mark the 100th anniversary of the beginning of The Battle of Loos, by Mapin Publishing in hardback.

'This nation needs to tell its soldiers that it cares'