'Whether the people will benefit or not depends on what the central government does in Kashmir successfully.' 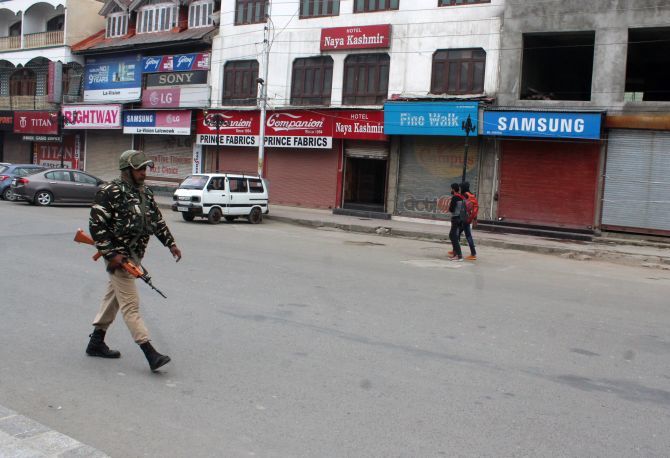 IMAGE: A security person patrols the deserted streets of Srinagar even as Jammu and Kashmir transformed into a Union territory on Thursday, October 31, 2019. Photograph: Umar Ganie for Rediff.com

Jammu and Kashmir transitioned from a state into two Union territories -- J-K and Ladakh -- on Thursday, October 31, 2019.

When Union Home Minister Amit Anilchandra Shah announced the scrapping of parts of Article 370 -- that granted special status to Jammu and Kashmir -- in the Lok Sabha on August 5, the government had set a deadline of October 31, Sardar Vallabhbhai Patel's birth anniversary, as the day when Jammu-Kashmir and Ladakh become UTs.

What changes will the development bring to the lives of people of Jammu-Kashmir? How will their lives be different as residents of a Union territory vis-à-vis a full-fledged state?

"Even if the legislature is constituted, the ultimate control will be with the central government. The say of local Kashmiri politicians will be reduced," Rakesh Dwivedi, an expert in Constitutional law, tells Rediff.com's Syed Firdaus Ashraf.

What will change in J-K from now on?

There will now be lieutenant governors for Jammu-Kashmir and Ladakh. This indicates that the central government will directly control both areas.

At present, a new legislature will have to be constituted under the amendment. (But) even if the legislature is constituted, the ultimate control will be with the central government.

The say of local Kashmiri politicians will be reduced.

How does this benefit the Kashmiri people?

This change does not indicate that the people are benefited. This move gives better, stronger and direct control to the central government.

The central government does not have to move or deal with the Jammu-Kashmir situation by involving local politicians.

Whether the people will benefit or not depends on what the central government does in Kashmir successfully.

Earlier it was said that state-level politicians never allowed central funds to reach the common people.

That is the test now. Be it the local politicians or central politicians, they have to cut through bureaucrats and local bodies, whose elections have just been conducted.

People will have to be involved. The real test comes now as to what policies the government adopts and how does it deliver.

These are the two tests the government has to pass.

Puducherry is not a conflict zone. Jammu-Kashmir historically had a position where the people didn't want to assimilate with India, unlike in other states.

There was resistance which -- without accusing either side (of anything) -- has resulted in a situation where we have terrorism. There is cross border (terrorism) too.

Merely having a legal and Constitutional machinery identical to Puducherry does not mean both places will be the same.

I believe 106 central laws will now be applicable to Jammu-Kashmir. How will it help in, say, issues like reservations?

The downtrodden will get reservations, but it only helps if there are jobs. Reservations help divide the cake equally, but the size of the cake is more important than that.

In my personal view, reservation has become a non-issue, as where are the jobs? Most government departments are seeing retrenchment and in private industries reservation does not apply.

Now the crucial test for the Modi government begins on Jammu-Kashmir, on how they restore political freedom and provide economic benefits to the people.

These are the two vital tests. We will have to wait and watch.

What about the fact that people from the rest of India can now buy land in Kashmir?

Kashmir was never closed to the world or the rest of India. At one point Hindus were in a majority and Sanskrit was the language of Jammu-Kashmir.

Later on, Islam came and before that there was Buddhism too. All religions flourished because Kashmir was open to the world.

Article 35A was obnoxious and it should have gone. Now, legally, people can buy land. But until and unless the environment is conducive, I am doubtful a large number of people will do that.

Nobody buys land to settle down and lose life. Had it been so easy, Kashmiri Pandits would not have fled.

It is more important to resolve the problem of terrorism and bring political peace than to facilitate buying of land.

Is there any precedent for such a move in a conflict zone in the world?

In Pakistan itself, Kashmir was divided and ruled like a Union territory. Gilgit-Baltistant area is one and Pakistan occupied Kashmir is another.

Baltistan does not have a legislature and is directly ruled by their central government.

In Pakistan occupied Kashmir they have a legislature and the prime minister is called Sadar-i-Riyasat, but that area is controlled by the Kashmir committee from Islamabad.

So Pakistan has the least entitlement to object to this move.

But this does not mean we should become like Pakistan. We should try to restore political freedom and I would be happy if J-K's 'state' status is restored.

But the politicians of Kashmir were not doing enough goes the charge.

I am not saying the step is wrong, but slowly and gradually we have to come back to state level.

The government has promised that and, therefore, I said the test begins now. It should not remain merely a promise. It has to be translated into reality.

How will the life of an average Kashmiri change?

Ladakh region will definitely benefit. Earlier, whatever funds were going (to the state) did not trickle down to Ladakh.

Now it is a Union territory, so it will be getting separate funds.

And what about the people of Jammu-Kashmir?

The whole exercise is to assimilate the Kashmir valley (with the rest of India). Jammu and Ladakh are not much of a problem.

We have to see how things improve there and how people adopt this new change.

Acceptability of the Kashmiri people is also important. They have participated in local elections and that is a good sign.