'Don't treat nurses as angels, treat them as professionals'

'The government lights lamps for nurses, but when we demand what is due for us, they don't listen at all.' 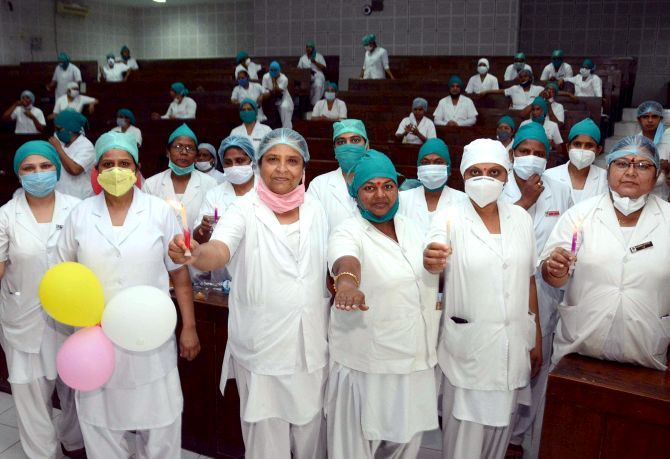 It has become the norm now to clap hands, shower petals and light lamps for healthcare workers though neither the government nor those who clap are aware of the tough conditions under which they work.

"According to the standards set by WHO and also by the Indian Nursing Council, one nurse can be allocated for seven beds in a general ward, that is, the ratio is 1:7. But in India, you find one nurse looking after 15 patients in a general ward which go up to 20 or 30 most of the time."

"Imagine the kind of pressure a nurse is going through under such circumstances. She is not handling 20 machines; she is handling 20 human beings," says Jibin T C, president, United Nurses Association, Maharashtra.

"We don't want to be called angels. We should be treated as professionals," Jibin, below, tells Shobha Warrier/Rediff.com.

Do you feel the pandemic has exposed the shortcomings in the Indian healthcare system? While Kerala with its strong primary healthcare centres managed it well, most other states have been struggling.

Yes, Kerala has managed the pandemic really well, and that is because they have a well-connected system that works like a team.

When they take a decision, everybody is consulted, from the top right up to the front line including the Asha workers.

Asha workers are the people who go to every home and enquire after people. Naturally they are the ones who are directly in touch with the ground realties.

So, it is paramount that they are consulted before planning is done, before a decision is taken.

Kerala followed this method. And that is the reason why Kerala managed the disease very well.

While in other places, only few people are involved in the decision-making. They just follow some guidelines to control the pandemic.

What is needed is, you need to work in the frontline to understand the situation well. This is what is lacking in other states.

In Maharashtra, the number of cases is going up drastically. Yes, we can understand that (population) density is quite high in Mumbai and Pune. But what is essential is the government has to take everyone working in the field along with them.

The number of healthcare professionals in the private sector, both doctors and nurses getting infected here is quite high. This is happening because they are not following the protocol or guidelines.

The government is also least bothered about what is happening. There is no standard protocol that is followed here.

What are the guidelines that are flouted in the states where healthcare workers are getting infected?

The major problem is the PPEs are of average or below average quality.

In many hospitals, the healthcare workers are either not given proper PPEs, or where they are given PPEs, they are not of good quality.

What is the point in providing the healthcare workers with equipment which do not work properly?

When 40 to 50 doctors and nurses get infected, even though they have used PPE, it shows the equipment given to them are faulty and not up to the standard prescribed by WHO.

You feel the authorities do not give adequate importance to the safety of the workers who are in the frontline, in direct contact with infected people?

Yes, there is no doubt about that. It is clear negligence on the part of the authorities.

Looking at the way doctors and nurses are fighting against the pandemic, they need to get protected and also appreciated. They are the most vulnerable in the entire chain as they are in close contact with the patients.

What I feel is the government has not given adequate importance to the safety of healthcare professionals. After all, they are also human beings.

Is it negligence on their part, or lack of knowledge?

I don't think it is lack of knowledge. It is negligence. They do not want to care about nurses. That is the attitude of the government.

Do you think nurses are treated as second class citizens as they are not in the decision-making process while doctors are part of it?

Very true. The power to make decisions is given only to doctors in India.

Look at every level, both at the central level and state level, you will not find a single nurse heading any department. Preference is given only to doctors.

How can a doctor know and address a nurse's issue? His problem will be different from that of the nurses.

Do you think a doctor will be interested in conveying nurses' issues to the government when he himself has a lot of issues?

Nurses should be given representation in various government set-ups, both at the central and state level.

Nurses are the best people to address patients' issues because they are with the patients and they know the patients better. This is an area the government must focus.

Look at the European countries, or any other country outside India, nurses are in equal or higher authority in the government set-up.

Inputs from nurses are valued in other countries. They understand that nurses are the best people to comment on the safety and care of the patients.

Why is it that nurses are treated as second class citizens in India?

The first reason is the dominance of doctors. Doctors are always dominating. They never treat nurses as a team-mate or a professional. So, nurses never get a chance to come up. 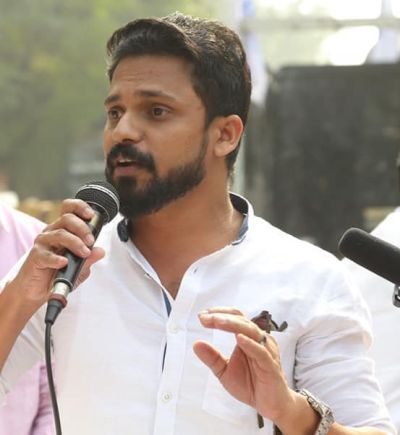 Nurses in India are well-trained, knowledgeable and dedicated. So, doctors feel that if they get power, they will start questioning their authority.

That is the reason nurses are not given a chance to develop themselves or come up.

We also have post-graduation and PhD in Nursing. Now we even have nurse practitioners. But we do not have designations based on the professional qualification, at work.

You released a manifesto on International Nurses Day signed by many nurses from all over the world. How has it been received in India?

As of today, nobody has commented anything on our manifesto. That's why I used the words, 'negligence' and 'dominance'; negligence by the government and dominance by the doctors.

They do not want to look at our problems. When we try to communicate with the government, they do not even reply to us.

How long can this go on?

We cannot wait anymore. We are in the frontline fighting for the patients' safety. We have to also fight with the government and convince them to give us what is due.

If this continues, the quality of care will get affected. All the good people from the nursing community are going abroad. We are losing the best manpower.

Is it because there is more respect and more money outside India?

Of course, that is the truth. The government should see how nurses are treated abroad. They are given great respect in society and also in the system. And they are well paid also.

You feel here you see only symbolic gestures like clapping and lighting lamps while the reality is different?

Exactly. Here the propaganda of the government is showing solidarity with the health workers by lighting lamps and calling them angels! That's the new corporate term used by the government; that we are angels.

Let me tell you, just calling nurses angels does not suffice.

We are not angels, we are professionals. We have a family, and we have to support our family.

I cannot tell the government that I am an angel, so I will not pay my taxes.

I cannot tell the house owner that I am an angel so I will not pay the rent.

I cannot tell the school that I am an angel so I will not pay the school fees.

The government lights lamps for nurses, but when we demand what is due for us, they don't listen at all.

It is like, how can an angel fight with the government?

We don't want to be called angels. We should be treated as professionals.

It was reported that many healthcare professionals, especially nurses, suffer from stress and fatigue.

If you look at the average age of nurses in the private sector in India, it is between 21 and 30. They are very young.

Many of them have just joined with very little experience, and are now fighting the pandemic. They need good moral support at this juncture. They also need to be treated with respect.

According to the standards set by WHO and also by the Indian Nursing Council, one nurse can be allocated for seven beds in a general ward, that is, the ratio is 1:7.

In a critical ward in the ICU, it is 1:1 which means one nurse is responsible for one bed.

But in India, you find one nurse looking after 15 patients in a general ward which goes up to 20 or 30 also.

Imagine the kind of pressure a nurse will be going through. She is not handling 20 machines, she is handling 20 human beings.

She has to be very cautious as, if something goes wrong, she will be blamed.

Medication error happens because of over work as we cannot focus beyond a certain level. That is why she or he should be managing a maximum of seven patients only in a ward. This is the reason why nurses are under tremendous stress.

Also, if you go to a private hospital where the nurses are given accommodation, it looks more like a refugee camp.

The problem with the government set-up is the shortfall of nurses; the ratio between nurses and patients is 1:30 and 1:40! This is the situation in most states.

There were instances of many healthcare workers getting infected though they used PPEs. Was it because they were not properly trained to use the PPEs?

Yes, they were not properly trained to use the PPE. This is a new pandemic and it is necessary that we train everybody, every single person in the healthcare system starting from the doctors.

That is lacking and that's why the virus is spreading among the healthcare workers.

Last week I visited a hospital and found that the quality of the PPEs was very poor. When I checked the polyurethane bag in which the PPEs came, I found that there were no instructions given. There was no specification, no standardisation, no quality control.

Every medical product should have specification written on it with certification. This information was not given to the nurses.

What has this pandemic taught us regarding the kind of healthcare system we need?

Privatising healthcare is not a good idea at all. That's because we will not have any control over private organisations.

We feel the government should invest more in healthcare.

Retaining good manpower is also very important because we are losing good people to other countries.

Instead of depending on the private sector, the government must focus on investing in the public sector and strengthening the primary healthcare system.

Building big hospitals is not the need of the hour, making the primary health centres stronger is what is needed.