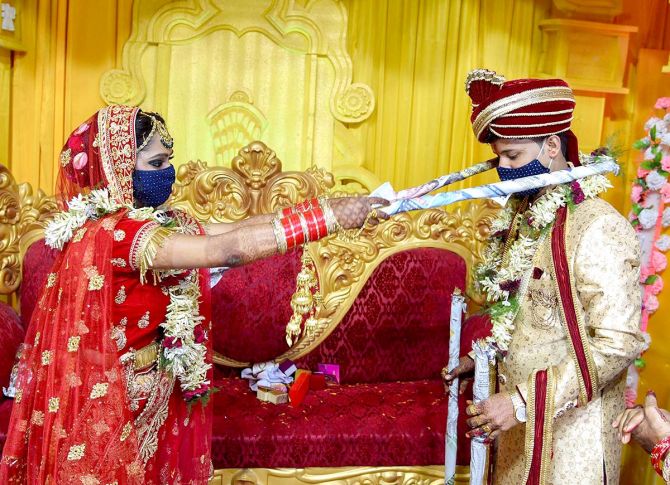 IMAGE: A wedding in the times of the pandemic in Patna, December 1, 2020. Kindly note the image has been posted only for repesentational purposes. Photograph: PTI Photo

When COVID-19 disembarks in our bodies, we feel its effects in our hearts.

Not just emotionally, but physically too.

In Part II of his interview to Vaihayasi Pande Daniel/Rediff.com, Dr Haider Javed Warraich, the Harvard cardiologist, researcher and physician writer, constructs a picture on how the heart fares when COVID-19 comes calling.

Read on about the voyages of SARS-CoV-2, the virus that causes COVID-19, in your heart:

And there was an article in The Telegraph, London about how cholesterol lowering drugs protects you from COVID-19.
What is your take?

You know I don't know what to make of it.

And honestly, I will be surprised if it really shows anything.

We have a lot of low-quality research, that's mostly observational research.

But being able to say that a medication will actually have benefited outcomes, you need a clinical trial.

We don't have any clinical trial data for those cholesterol-lowering medications.

What we can say is that if you are taking those medications, it's probably safe to keep taking them.

But I wouldn't think that we should be using that as some type of treatment, because we just don't have the data, although I hope that people will study this in a more formal fashion.

I don't think that there's any data that I've seen.

That's a good question but I haven't seen anything that would suggest that.

But again, I think it all depends on how severely ill you are to begin with.

If you start off at a place where you have multiple illnesses and your body is weak to begin with, then you will do worse with the infection.

If you are starting off at a healthier place, it's likely that you will not have more serious outcome from the infection.

That has generally been shown to be true.

Supposing, for example, you have had some heart valve operation, does that necessarily put you in the category of somebody who has hypertension?

I would say that if you had some type of heart valve procedure, and you're doing okay right now, that's very different from someone who has a heart failure or something like that.

Scientists and doctors, who I have interviewed, have told me SARS-CoV-1, that caused the first SARS, also showed evidence of having a multi-system way of attacking the body, causing heart illness too, long lasting at that.
Were you aware of that and what are your thoughts on that?

We don't have as much data from the initial SARS but we know from other similar illnesses, such as, say for example, influenza, that influenza increases your risk of having a heart attack.

Flu increases people's risk of having a heart attack, and it can cause a multi-system illness.

So, it is not entirely surprising that COVID-19 is causing this type of essentially body-wide reaction.

The only difference is that many more people have this viral infection than really any other infection we've seen.

There is something sort of puzzling from a layman's point of view about this.
If we already have been through an illness like the first SARS -- which had a more limited kind of spread, but was also a dangerous virus that caused these grave multi-system reactions in the body -- how come there was no kind of understanding that we can have another version of it, which will be worse?

Well, pandemic experts have been talking about the risk of another pandemic.

There was -- at least in the United States -- a group that was established for pandemic preparedness.

Many people have been, at least the experts, have been worried about a pandemic like this.

Did anyone foresee this exactly?

But I think people have been worried about a pandemic outbreak that might be worse than anything we've seen before.

It's just that human nature, at least from a public's point of view, there's so much else going on, that maybe we just never paid attention.

Certainly, we've seen that many politicians, at least in the United States never paid attention to see that some of those groups would be funded.

I mean our worlds are very busy.

There's always something going on.

But the people who are focused on emerging infections and pandemics they were always concerned that something like this could happen.

I guess it's also the responsibility of the media to be more interested in these issues.
But it was not probably as interesting as other things making news.

Obviously, we all agree is completely something unprecedented and historic.

How has COVID-19 has changed your work as a cardiologist or your profession.
And even your job as a medical commentator because you do write for different publications?

As a physician, our work has been affected, especially when the pandemic was pretty much out of control, here in Boston, where I work.

We were limiting going to the hospital.

We were managing a lot of our patients on the phone or through video chat.

As the pandemic has improved, we're now closer to a more normal workflow.

But it's still not the same.

We have limited visiting hours in the hospital.

You cannot get a lot of visitors because we're worried about infection spreading.

That is going to be one long, long lasting effect of the COVID-19 infection. 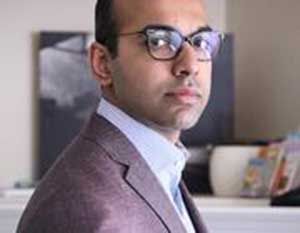 That is why I think the need to be extremely careful about what you write as a physician for mainstream audiences has become even more so.

So, your responsibility as a physician while writing is actually even more so than ever before, I would say.

You had mentioned in an article in the media about how people -- doctors, hospitals and the health industry as a whole -- need to know more about palliative care.
In India, where even hospital beds and medical care are short per head, it's still a very small field.
But what about the general thrust of that statement of yours can generally apply to India too maybe?

Palliative care is essentially a form of care in which we focus more on people's wellbeing and quality of life, rather than essentially thinking of how we can prolong life by all means.

I would say that it's probably as important in place like India, as it is in the United States.

Although the reason why this is such a big issue here is because people have access to a lot of life support -- that sometimes may not be what people might have wanted -- than they do in a place like India or Pakistan, where many people still struggle just accessing basic health care.

But it's as important in a place like Pakistan or India, as it is here, to know that if you have multiple medical illnesses and were at risk to begin with, that if you catch COVID-19, you might be connected to a breathing machine or struggling in an ICU.

If that's not something that you would want.

And you'd like essentially for nature to take its course, if something bad happens.

Or at least not escalate care to the point of needing a breathing machine, talking about that, before you get an infection is so much more important, than waiting for something bad to happen, and then thinking about how you would like medical care.