'We are making decisions in the dark, in fear.'
'Let us shine the light of science on this.'
'Let us actually get better numbers, so that we make better decisions.' 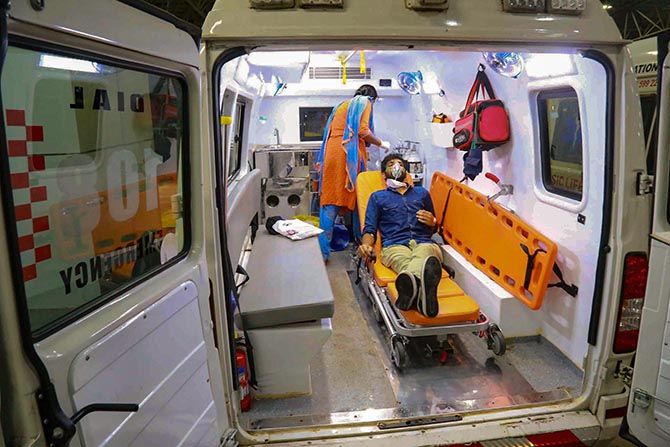 IMAGE: A passenger is seen under medical care inside an ambulance after arriving from Kuwait by an Air India flight at Calicut International Airport, May 14, 2020. Photograph: PTI Photo

You are a professor of medicine at Stanford (did an MD) and did a PhD in Economics. Tell us what made you go into economics after doing medicine?

I have always been interested in medicine. I loved science.

In school, I encountered economics and I was amazed to find that you could use the tools of economics to understand questions in medicine -- in a very different, but a very effective way. And that is why I picked both.

And you focus on the economics of health care as a theme around the world. Why is it that you believe that we are overstating what could happen if we were not to have a lockdown?

I want to correct the record slightly -- I actually believe that the epidemic is more widespread than we believe, not less widespread. That is my hypothesis.

I would like to see that hypothesis tested, basically, everywhere. And the reason I believe this is that there are many people -- we are seeing this from studies around the world -- who have been infected with the coronavirus, cleared it (sometimes with no symptoms, sometimes with mild symptoms) and never got tested.

So the case numbers are all cases where there has been a test done to check whether the virus is active in you. 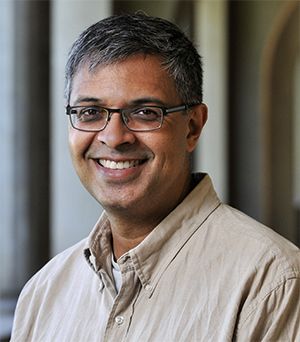 And in India, we are testing only if there are symptoms to start with.

Right, that is similar to (the protocol followed) all around the world... because why would you go get a test if you have no symptoms, right?

But that means that we are missing, most likely, large numbers of people who have not had symptoms and have not been tested, and yet have had the virus.

The only way to check for that is by doing antibody testing.

Antibodies form in response to the virus and provide evidence that you had previously been infected.

Only by doing that kind of testing do we understand how far along in the epidemic we are. And as I said, my hypothesis is that we are very far along, much further along, than we can tell from just looking at the case reports.

Why would you assume that there are far more people either in the United States or elsewhere carrying this virus already or for a much longer period of time?

That is a good question. Obviously, this is a novel virus, there is a lot that we do not know about it.

The hypothesis is primarily driven by the work that I did during the H1N1 flu epidemic in 2009, and actually just following that literature.

In that literature, the early case reports reported very high fatality rates. And the reason was, they looked at the identified cases in the denominator just like we have been doing now.

And 1 to 2 per cent of the population that were infected with H1N1 in the early days of the epidemic died.

A year later, people started to do these antibody tests and found out that very large numbers had been infected and never knew it.

The fatality numbers went from 1 per cent of the cases to 0.01 per cent. That transformation of our view happened over a year-and-a-half.

It is not unreasonable to say that that same kind of situation may be happening now. Now, this is a hypothesis -- it needs to be tested.

It might be wrong, it might be right; but the only way to find out is to do widespread population-level seroprevalence testing. 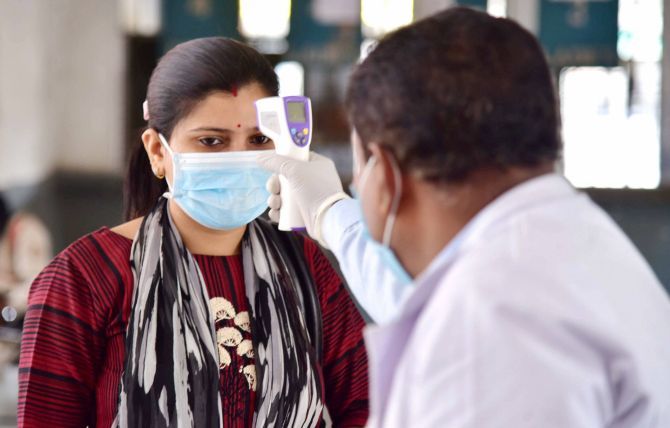 IMAGE: A medic checks the temperature of a passenger at a bus stand in Assam's Nagaon. Photograph: PTI Photo

The other number that one hears, including from the medical profession, is that for 85 per cent of the people who are infected, nothing really happens. And it is the 10 to 15 per cent we are worried about, maybe the 3 to 4 per cent who go into intensive care units and ventilation, and then things go south quite dramatically after that.
So is your theory in some ways reflecting that -- that a lot of us may carry it... by now we know people who contracted it, only exhibited mild symptoms or severe symptoms of flu and then it dissipated?

The only thing I would add to that is, we don't know it's 85 per cent of what, because we do not know the denominator. But it does seem to have, in many cases, no symptoms at all.

In Chelsea, Massachusetts, there was a study done just a couple of days ago suggesting very large number of people with antibodies, studies now done in prisons, where they find the virus active in people and most of the prisoners do not have any symptoms at all.

On the other hand, the virus is also deadly, as you say, in many many cases. It presents with a severe viral pneumonia, especially in older people or people who are vulnerable.

We should better understand who is at risk from it, how extensive it is, and then make better decisions as to what to do about it as opposed to now.

I think, to some extent, we are making decisions in the dark, in fear. That is my main call, let us shine the light of science on this. Let us actually get better numbers, so that we make better decisions.

And then the economic conclusion would be that we should not be fretting too much about lockdowns and quarantines, and open things up?

I do not know the optimal policy until I know the numbers -- it is really hard to say. One outcome, I am hoping from this work is, we will quell the fear.

That is essentially what the World Health Organisation said, 3 per cent mortality.

I think making policy in the midst of fear is really a bad idea.

Now, there may be reason to fear. As I said, it is a hypothesis, we need to see these numbers everywhere.

But if you are going to reason and think about policy in fear, it better be well-rounded fear, not fear based on not knowing what the number we can very easily get is.

In a way, you represent both worlds (medicine and economics) to answer the next question. In India, the prime minister has said it is lives versus livelihoods, and it is the same debate everywhere.

It is not just livelihoods though, it is lives.

People talk about economics as if it were a secondary thing. But it is actually lives.

Poor countries are deadly, especially for the poor.

The deaths from the shutdown and lockdown policies worldwide will create (we are already in it) a devastating global economic depression.

That depression will kill people -- large number of people. It's only a question of who will die relative to the Covid deaths.

On both sides of this policy, there are deaths.