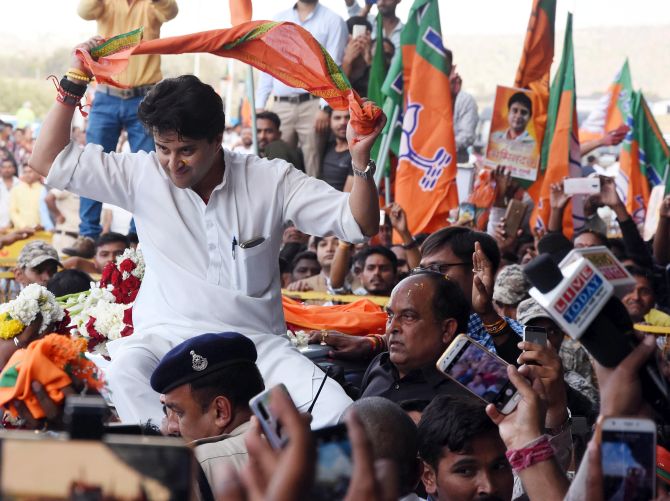 IMAGE: Jyotiraditya Scindia being welcomed on his arrival at Raja Bhoj airport in Bhopal soon after he joined the BJP. Photograph: ANI Photo

The Congress was once again put on the back foot after losing Madhya Pradesh on Friday, March 20, with Kamal Nath resigning as chief minister hours before a vote of confidence in the wake of Jyotiraditya Scindia walking out of the party, taking along 22 of his MLA supporters.

One wonders how seasoned Congress politicians like Digvijaya Singh and Kamal Nath didn't see the storm coming, or was it a case of them taking Scindia for granted and thinking they wouldn't lose power come what may?

"Madhya Pradesh was the biggest state with the Congress and they lost it because they could not sort out the internal differences within the party," Yatindera Singh Sisodia, director, Madhya Pradesh Institute of Social Science Research, tells Syed Firdaus Ashraf/Rediff.com.

Was Jyotiraditya Scindia's exit following a sudden breaking point, or was it leading up to it for some time and it was only a question of time?

It was going on for some time. He was being sidelined in the party. He was not taken into consideration when decisions were being taken in the party.

In fact, trouble began to brew when he was not made chief minister of Madhya Pradesh.

There was a discussion that he would be made Pradesh Congress chief, but that too didn't happen.

Worse was when he lost his Lok Sabha seat (Guna) in 2019; that was very difficult for him to accept.

Ever since then, things started precipitating. He was not even the first choice for Rajya Sabha member of the Congress from Madhya Pradesh (it was Digvijaya Singh).

But what was the breaking point?

Scindia made one statement in public that if the election manifesto of the Congress party is not implemented, then he would come out on the roads against his own government.

When (then Madhya Pradesh chief minister) Kamal Nath was asked about this by reporters, he dismissed Scindia in one line, saying, 'Toh uttar jaye (let him come on the roads then).'

How did a seasoned politician like Kamal Nath underestimate Scindia?

If you see Kamal Nath's political career, he was always in the central ministry. He took charge of different ministries and performed well during the Congress regime, but state politics is altogether a different ball game.

In state politics, there are pull and push factors.

In the states, every MLA has his own aspiration and demands and this needs to be adequately addressed from time to time.

This was the first time Kamal Nath was handling such a situation in his political career.

The post of a chief minister is very demanding job and it is a 24x7 job. You cannot relax on this job.

And Kamal Nath was leading a government with a wafer-thin majority with just half a dozen members more.

It became worse for the Congress in the 2019 election. The Congress won only one Lok Sabha seat and lost 28 seats from Madhya Pradesh.

What went wrong in Madhya Pradesh? Just six months before the general election, the Congress won the state, then they lost so badly in 2019. Why?

They had made many assembly election promises and did not meet them before the 2019 general election.

They did give some of them, but many of them were left out.

The Congress manifesto promised the moon whereas the fact is that there is no revenue generation in the state. And the Congress won Madhya Pradesh on the farmer's vote.

Shivraj Singh Chouhan was considered a pro-farmer chief minister and he did a great job for farmers. But the Mandsaur firing incident changed everything for Shivraj.

This incident united the Congress party. The anti-incumbency factor of Shivraj Singh also worked against him.

There was fatigue that set in among voters as Shivraj was ruling for 15 years. Moreover, there were sitting BJP MLAs who were unpopular among voters so they lost by a thin majority.

What role did the Gandhi family play? Why did they fail to intervene in the crisis?

This is very unfortunate for the Congress party. The high command's role was to make Kamal Nath and Scindia sit together and sort out the issue amicably. This issue was unaddressed for very long.

I am sure it was not easy for Scindia to quit the party. The Congress party underestimated Scindia's potential.

His political rival, Digvijaya Singh, has command over the party, but not the masses. This was very clearly visible to him and everybody.

He has no mass popularity and decisions were being taken through the back door where Digvijaya managed the high command.

Madhya Pradesh was the biggest state with the Congress and they lost it because they could not sort out the internal differences within the party. 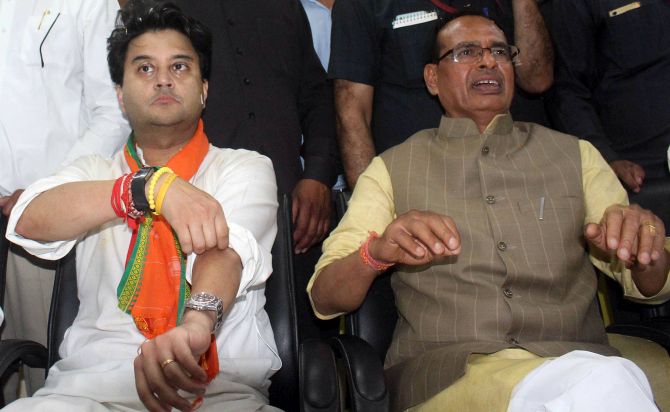 Did an ego issue bring down the Congress government in Madhya Pradesh?

There were always Congress factions in Madhya Pradesh. And each faction either got a share in the ministry or organisation. Loyalists always got some space in politics.

Now they don't have any presence at the Centre and in the state cabinet there were five cabinet ministry seats unfilled.

There were 100 other seats not filled in corporations and boards. The Congress party could have accommodated the rival factions, but it did not do that. They sat on these things for 15 months.

And the Congress leadership -- that includes Kamal Nath and Digvijaya Singh -- had to accept Jyotiraditya's presence, but they intentionally ignored his presence.

He was always a big leader in Madhya Pradesh though he lost the 2019 election -- it was only because of the Modi factor.

Does Scindia have a future in the BJP?

He has charisma. He is a mass leader and he is popular all over Madhya Pradesh. He can also be a pan-India leader. He is a good orator in English as well as Hindi. He is well read and understands the ground issues very well.

Scindia is an asset for the BJP, not a liability. He is from the elite class and the BJP lacks that class.

If he was adequately addressed, he would not have gone to the BJP but he was not addressed.

What does the future hold for the Congress in Madhya Pradesh?

Harsh times. Long churning will happen and some break-ups will happen. People will move out.

There is a crisis of leadership in the Congress. And if this is not addressed, the Congress has no future at this moment.

Will Shivraj Singh be able to work with Scindia?

He will be in the state and Scindia will be at the Centre.

In Madhya Pradesh, the BJP is a cadre-based party. He (Shivraj Singh Chouhan) will never be a larger than life persona. He has worked hard in Madhya Pradesh. He is docile and humble. He is a very grounded person.