'In AAP, those who are in charge of a particular state provide information to Arvind Kejriwal.
'In the BJP, several organisations convey what is happening on the ground to the top leadership.'
'There are so many channels through which issues are being understood.' 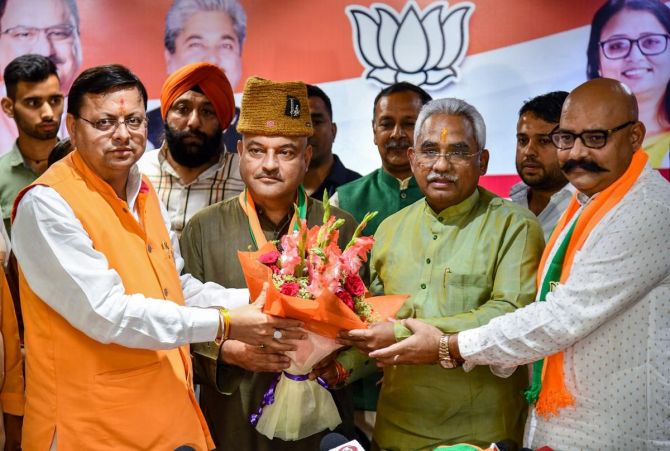 Before retired Colonel Ajay Kothiyal Kirti Chakra, Shaurya Chakra, Vishisht Sewa Medal entered politics in 2021, he had spent most of his army career in Jammu and Kashmir.

The colonel operated in different types of environments -- lead anti-terror operations and battled avalanches atop high peaks. He suffered bullet injuries in an operation against terrorists. Two bullets are still embedded in his hip and thigh.

"I didn't realise I had suffered an injury. When I reached the company headquarters after six, seven hours and opened my combat trousers, I was bleeding inside," recalls the 53 year old, sitting in a room with a few mementos of his days in the Indian Army.

Two nursing assistants patched him up. Five days later, he went to the military hospital in Srinagar to show the gunshot wound. The doctor prescribed medicines to calcify the area around the bullet wound because extracting it would risk further damage.

"I don't feel them at all anymore. The bullets will fall out when I am burned on my funeral pyre," he laughs.

In the second part of his interview to Rediff.com's Archana Masih, Colonel Kothiyal reveals the reason behind leaving the Aam Aadmi Party for the BJP, why the latter party is different and what he learnt from a Gurjar guide in the jungles of Kashmir.

Who are the seniors or juniors in the military who have left a lasting impression on you?

You learn so much every day. My Gurjar guide taught me so much in J&K.

I was posted to Kashmir soon after I scaled Everest in 2001. Our team of soldiers grew beards, learnt to do wazu before namaz etc so that we did not stand out when we went for recces (reconnissance) in the villages.

All these may sound superficial, but serve as motivating factors for the men you command.

What happened was that whenever we entered the village, the dogs would start barking at us.

It was then that our Gurjar guide told us not to bathe for a week, not to carry poori, but roti and alu sabzi without garlic and tomato.

We followed his advice and when we walked past the same dogs, they didn't even look at us!

So these are learnings that help you along the way.

Today based on such learnings there are case studies in army training manuals. They give the example of our operation -- how six of us killed 7 terrorists with 16 bullets.

On September 19, 2010, I was taking a team of the army's best trained mountaineers ahead of Badrinath to Kamet peak at a height of around 17,700 feet.

Suddenly we got caught in an avalanche and were buried in the snow. It was incidental that I was able to dig myself out, but we lost two army officers.

The base camp which was 40 minutes away, but it took 24 hours because of bad weather. We carried the dead bodies and one injured.

The rest of us suffered frostbite, luckily no amputations had to be done.

Later on, I was detailed to take the 17 members from this group for an expedition to Manaslu, the seventh highest peak in the world.

As a decorated soldier who served the country with distinction were you not disappointed that you did not win your first election?
It is peculiar that voters who often say that there are hardly any good people in politics, do not actually vote for them when they do contest.

I entered the fray just two-and-a-half months before the election. A few of us who joined the Aam Aadmi Party were disoriented about the party's plans in Uttarakhand. The party could not convince the people. People here have a strong feeling of nationalism and AAP's narrative was not very truthful.

For example, a small clip by Arvind Kejriwal on the Balakot airstrike was manipulated and misrepresented by some media channels, but the fact that the statement was made was unacceptable to the large fauji community in the state.

I had visited the government schools and hospitals in Delhi and liked the concept. But the message that the party conveyed in the year after its entry in Uttarakhand was quite different.

A narrative was also created that I was a good man in a not so good party. The narrative makes a lot of difference especially among the hill people.

I don't have a political background. As a fauji I thought if other candidates go to a place twice for campaigning, let me go five times and see what people actually want from me, or why are they not convinced.

I was the main face of the party and realised that there were some errors in the AAP's message.

There were many who left AAP even before the election like Anant Ram Chauhan, IPS; Suvhardan Shah, IAS; former state election commissioner, retired Major General C K Jakhmola. This hurt the image of the party and the narrative which the party was trying to create was totally broken. What kind of a leader is Arvind Kejriwal?

It was not difficult to go and meet him personally in Delhi. He was open and approachable in that aspect.

The main issue which affected AAP's presence in Uttarakhand was that the people earmarked to work for the party were very confident that they could replicate the Delhi model here.

Kejriwal was getting incorrect inputs from them.

Can AAP make a dent in the Gujarat election this year? Can Mr Kejriwal be a serious contender against Mr Modi for prime ministership in 2024?

He aspiring for that, but I don't think it is possible.

They both came onto the national scene almost at the same time. Modiji had a formidable background as chief minister and his Gujarat model was spoken about very highly.

Kejriwalji was ambitious and contested the 2014 election against Modiji.

They hold seminars, charchas and speak about how they will make the state's budget compatible in terms of providing free electricity, free water, some monetary gains for women, etc. These are standard narratives created by AAP.

They follow a templated toolkit. Since this has become a standard practice, the public and Opposition can also anticipate AAP's next move.

They were successful in Punjab because the Congress, the main Opposition party, was breaking further every day during the campaign.

I don't think they will be able to achieve much of what is being projected in Himachal Pradesh and Gujarat. 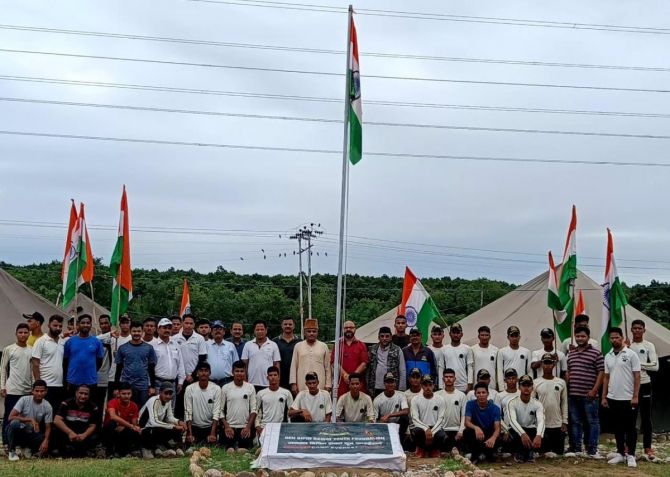 What attracted you to the BJP? Why do you think that this party is different from other parties?

The BJP has developed as a political party over decades. There are many organisations associated with the party in different ways that have supported the growth of this political party.

They have created a set-up wherein these organisations provide inputs from the ground on education, farming, labourers, environment, defence, health, etc and convey it up the ladder in the hierarchy.

In AAP, those who are in charge of a particular state provide this information to Arvind Kejriwal. While in the BJP, there are several organisations that convey what is happening on the ground to the top leadership.

There are so many channels through which issues are being understood.

Secondly, the BJP is prepared to take strong decisions.

We are not only the biggest democracy, but India is taking an important stance in the global arena.

INS Vikrant is a big example. It's not just about an indigenous aircraft carrier being commissioned, but the fact that the metallurgy capability has been developed in our country. It has much significance in the international maritime environment.

There is a shift in the way the world is looking at India.

Modiji has created a very impressive team. The prime minister's office is not only a political setup for running the nation, but has people with vision.

Similarly, the office of the national security adviser.

China may be stronger than us, but we are capable of speaking the same language to them.

Therefore, the leadership has a very competent mix of bureaucrats and politicians who are in charge. 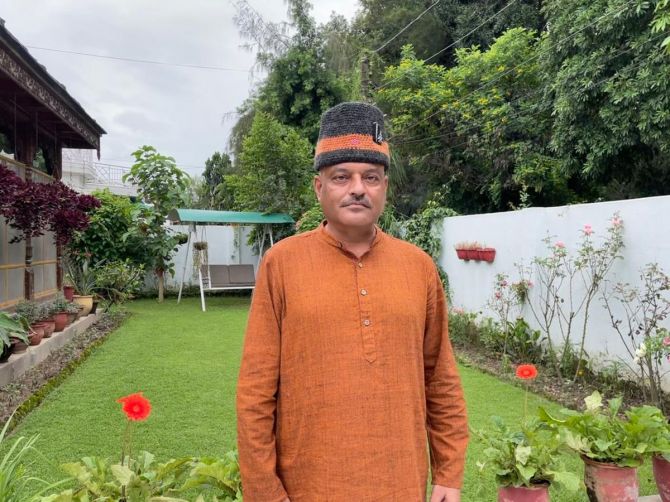 Uttarakhand has seen three BJP chief ministers in five years and is not seen as a cohesive unit. There have been charges of nepotism levelled against the leadership for appointments in the secretariat recently. All these do not bode well for a party which you say is different from the rest.

There are aspiring people in state level politics everywhere. The chief ministers were changed in the previous BJP government.

The state was created around 22 years back and there have been BJP and Congress governments since then. Groupism does not afflict the BJP alone, the Congress party has destroyed itself due to groupism.

The BJP will also face such challenges, but the party has a very sound organisational setup and a good network to create a stable government.

What is the kind of politics that you personally want to pursue?

Uttarakhand is a small state with many resources. The Himalayas are our biggest resource. The holy Ganga originates here. People come from all over the world. The state provides the best environment for yoga and wellness.

We have all these resources which have not been utilised properly. They need to be given direction and implemented.