'We must acknowledge China will use Pakistan against India.'
'We all need to know that these two countries are ready to destabilise India at all times.' 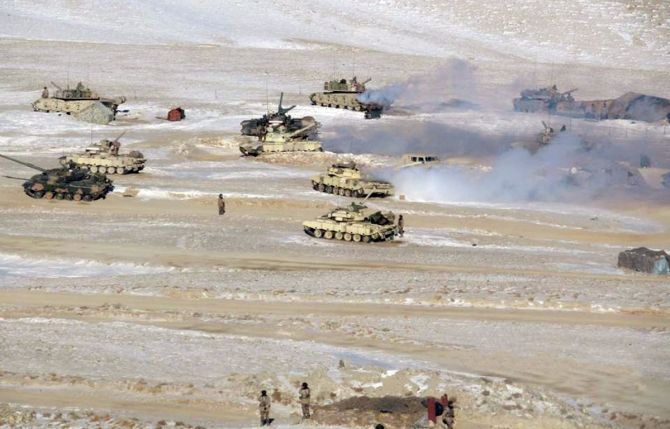 IMAGE: Indian and Chinese troops and tanks disengage from the banks of the Pangong Tso lake in eastern Ladakh. Photograph: PTI Photo

"Galwan was a turning point. The Indian response took the Chinese by surprise. They realised that our soldiers were more than a match for them. The Chinese realised they were vulnerable," says Lieutenant General Sanjay Kulkarni (retd), PVSM, AVSM, SC, SM, VSM.

"he Chinese only understand strength. We should hold our ground and not give in," General Kulkarni says in the concluding part of his interview with Rediff.com's Archana Masih.

We started this disengagement process since February and vacated the Kailash heights, but that has not yet resulted in China retreating from Hot Springs, Gogra and Depsang. What is the way forward?

It is a Catch-22 situation. We must not get lulled into complacency. We should be prepared for the worst and preparing for the worst means that we are ready to face more skirmishes with the PLA on the LAC.

Galwan was a turning point. The Indian response took the Chinese by surprise. They realised that our soldiers were more than a match for them. The Chinese realised they were vulnerable.

Their vulnerability comes from the realisation that they don't have adequate number of men capable of fighting at those heights.

Chinese soldiers have got accustomed to living the good life and are finding it difficult to counter the harsh weather conditions for sustained periods of time. Hence, they stay in barracks 100-150 kms away from the LAC which are relatively comfortable than being right on the LAC.

Why would a PLA soldier want to be deployed at place where he can't eat well, see well and not have a comfortable place to stay?

Whereas Indian soldiers have no option. They are deployed all along the LAC. They can't afford to go back, they can only do that if we have excellent infrastructure to return to the frontline in quick time.

How can the Chinese be pushed back from the other friction points on LAC? What do you think India's strategy will be?

We have to hold on to what we have. We must be combat ready at all times and have boots at the places that matter.

The Chinese know that COVID-19 is not going to disappear for at least a couple of years and they will keep building military pressure. India will have to spend more on military preparation.

We have to stay alert to stand up and strike hard when the time comes.

We cannot trust the Chinese. If we have to deny them what they want, then we must be militarily and economically strong.

Only when we are economically strong, can we spend more on military modernisation and equip ourselves better.

The Chinese only understand strength. We should hold our ground and not give in. 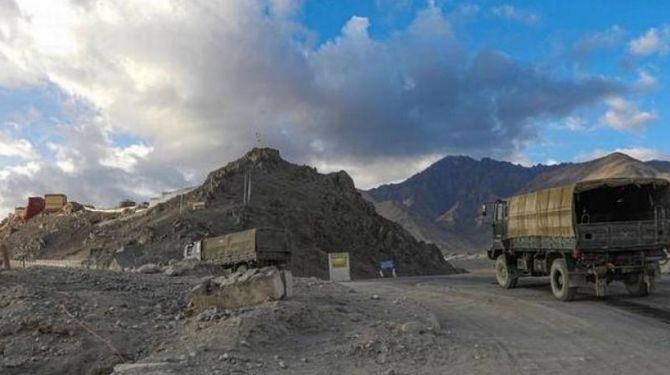 After decades of relative peace on the LAC, what are the reasons behind Chinese belligerence?

The Chinese want to overcome centuries of humiliation after the Treaty of Peking (with Portugal), Treaty of Nanjing (with Britain) and others treaties with Tibet and Japan. These treaties were signed from a position of weakness which resulted in a century of humiliation for China.

They do not want to be in that humiliating position ever again and hence are exerting themselves.

Our alliances like Quad have put China in a dilemma. China has been isolated. They have become loners in the international community.

They see India as a friend of the West and not the East. They want to keep India on tenterhooks.

The Chinese have always been very concerned about their reputation. They consider their 5,000-year-old civilisation superior. Xi (Jinping, general sevretary of the Chinese Communist party, president and chairman of its central military commission) may want to take his country to the pinnacle of glory, but certainly not at India's cost!

We will not allow that to happen.

It is not as if we cannot occupy the Kailash Heights again. It is well within our reach and ability. We have just pulled back a little. Indian troops are positioned all around it.

The Chinese are not at the Kailash Heights either. Had the Chinese occupied it then it would have been to our disadvantage.

Should tensions rise again it is a race to that height -- about who gets there first. I am sure the Indian Army has catered for that contingency.

We have not lost out by vacating it. It helped in reducing tension. The PLA has gone back to Finger 8 and we have gone back to Dhan Singh Thapa camp.

The Chinese have played dirty, let's be honest about it. They might interpret the status quo ante April 2020 to include Hot Springs, Gogra, but Depsang pre-dates 2020.

The Depsang transgression goes back to 2013. Hence, there is a lot of ambiguity. I think we should hold on to make the Chinese feel insecure. We must not allow them to transgress at any point and should be ready to take them on anywhere.

We have shown the Chinese they are not 10 feet tall. They are vulnerable, especially in high altitude warfare.

We must not get complacent. Even if 11 rounds of talks become 22. The Chinese should not be taken at face value. 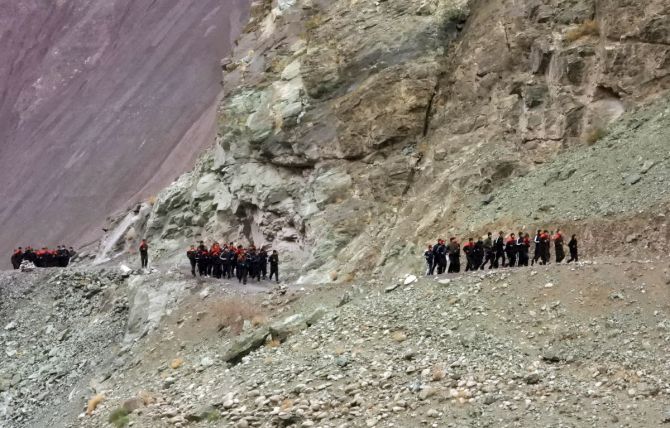 Do you feel China has decided to settle the boundary question through the use of arms?

No, China will not use arms. China believes in the philosophy that the Supreme Art of War is to subdue the enemy without a fight. Through the Peace and Tranquility Agreement which prohibits the use of arms, China has led us down the garden path.

They will continue to threaten us. They do not want to fight, but to pressurise us.

The Chinese are very, very ,particular about the reputation, they will not accept loss. Ever since the founding of the People's Republic of China, the only country against which they have won a war is India.

Otherwise, the Chinese have lost every battle, every war. The Chinese would never want to lose a battle or skirmish with India.

Only when we are prepared will we have the deterrence that will prevent a war.

The most important thing is to be united within the country. We must all acknowledge that China is our enemy. We must acknowledge China will use Pakistan against India. We all need to know that these two countries are ready to destabilise India at all times.