'As an aspirational district, one of the main challenges is health and nutrition of the tribal community.'
'They are 1.5 lakhs to 1.6 lakhs tribals in this district.'
'The major issue among tribals is malnutrition and anaemia.' 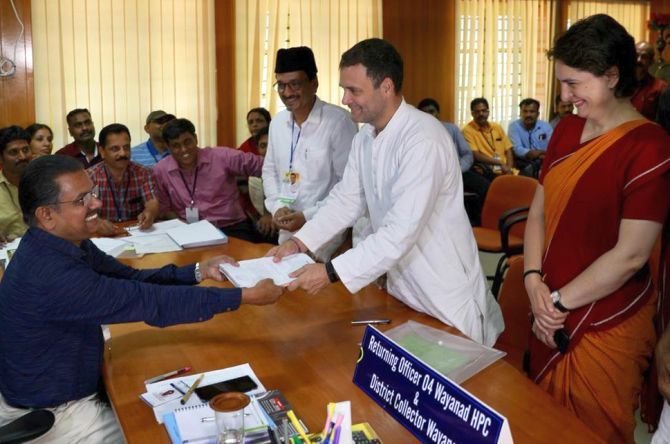 It is early in the day and the corridors of the district collector's office in Wayanad are quiet. The seats outside his confidential assistant's office are empty; a petitioner is waiting to see the collector with a letter in her hand.

Messages about polling day can be found in the corridors of the collectorate building which is the arm of the Election Commission in the district.

As the returning officer, Ajayakumar A R, the district collector, is the most important person in the conduct of the election.

In districts across India, an election constitutes the most vital duty discharged by young IAS officers serving as district magistrates or collectors. The sheer scale of the exercise and responsibility shouldered by these bureaucrats makes it the highpoint of their careers.

The buck stops with the collector for a free and fair election.

Ajayakumar, a 2012 batch IAS officer, tells Rediff.com's Archana Masih about the challenges posed by the hilly terrain and security arrangements required to counter the Maoist threat in the district with the largest tribal population in Kerala.

How serious is the left wing terror threat in Wayanad?

Except the one killing reported one month back, sightings have been reported in several parts. But we are confident we will be able to counter any such mischievous activities on their part.

The increased threat perception is due to left wing activities in and around the district.

What are the big challenges of conducting elections in Wayanad?

The major challenge is regarding the terrain itself. It is a mountainous terrain and many booths are located in adjoining areas of forest.

We also have to make some elaborate security arrangements because of the recent Maoist threat to ensure that elections are conducted in a free and fair manner.

We have done that exercise and are confident that no such eventualities will take place.

The population is around 8 plus lakh and polling booths are well placed with assured minimum facilities arranged at all polling stations. 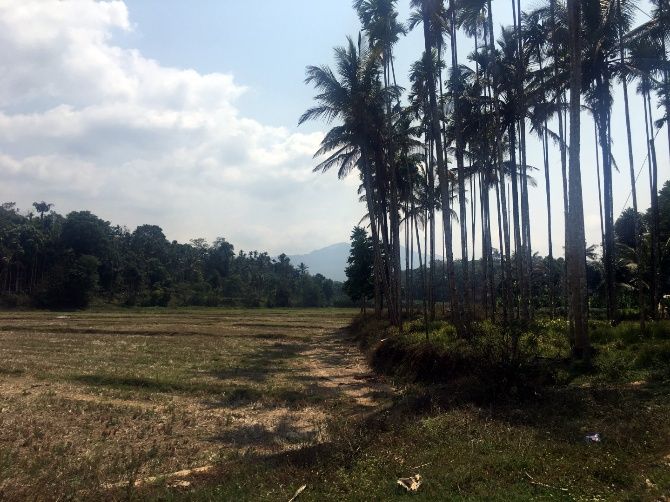 IMAGE: Coffee and pepper are the main crops of the largely agrarian district. Farming has been hit and farmers are facing acute distress. Photograph: Seema Pant for Rediff.com

There is talk that Wayanad is the Vidarbha of south India with farmers committing suicide...

No, that's not true. In terms of farmers's suicides, Wayanad is not number 1. But yet that is a real issue because climatic change is hampering cultivation in this district. The recent floods have also had an impact.

The major crop is coffee, followed by pepper and rice. Coffee plantation is badly affected by climate change. Pepper cultivation was also affected a bit because of the floods.

One part of the district is also drought prone which is creating problems for the agricultural community.

We will take all possible steps to address this issue within our limited resources. I am happy that Wayanad has been selected as one of the aspirational districts so that we get a little more funding from the agencies.

Now that this district is coming into the limelight, I hope some more assistance will flow so that people benefit. 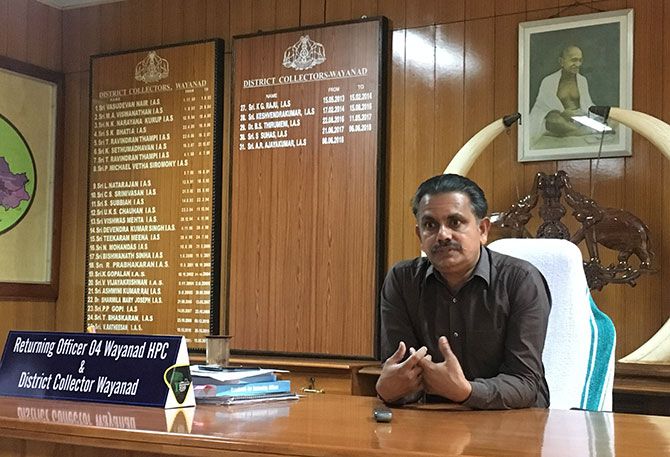 Ajayakumar A R, the district collector and returning officer, Wayanad, is responsible for conducting the Lok Sabha election in the hilly district, 80 percent of which is under forest cover with the largest tribal population in Kerala and under the shadow of a Maoist threat. Photograph: Seema Pant for Rediff.com

Do you think if a VVIP becomes an MP, it will help Wayanad?

Sure, that goes without saying.

In your experience of having worked in different places, when a big leader becomes an MP of a small place, what difference does it make to a district?
Say if Rahul Gandhi was to become the MP from here, what difference will it make?

I think you know the answer to that question. Basically if some VVIP, whoever it may be, is contesting from a particular constituency, definitely the constituency will get the benefit in several ways.

I cannot specifically say which benefits will come, but it is quite a well-known thing.

How was the VVIP's interaction with you? We saw pictures of you during Rahul Gandhi's filing his nomination.

That is only an accidental thing, suppose some other person was sitting here, he'd be captured on camera. That's it. Nothing new.

Was he gracious and polite?

Yes, of course. Not only he, all the politicians are very polite while dealing with them.

Do farmers constitute most of this region? What are the kind of jobs people do? What about employment for young people?

Yes, that is also one of the issues we are facing because this is basically an agrarian society. Majority of people are engaged in agricultural activities. So skilling this community is very important.

This aspect is also taken care of under the aspirational district banner. In fact, nearly 1.25 lakhs is the estimated population that needs to be skilled, that is the employable category.

When it comes to skilling, the capacity of the population also has to be assessed. Only then can we frame a plan.

We have already assessed this and plan to skill this 1.25 lakh population over a period of 5 years, and are tying up with respective training institutions.

There are just two technical institutions -- one engineering college and two polytechnics -- apart from some private institutions here which will not be sufficient to skill the people.

I have had two or three rounds of meetings with the Kerala Academy of Skill Excellence and another one with the Community Skill Park and a third with the Botanical Labour Cooperative. They will be providing employment for skilled labour. The fourth is NADF, a government approved institution in Thalassery, that also provides some skill training.

We are chalking out a skilling plan for unemployed youth in this district. 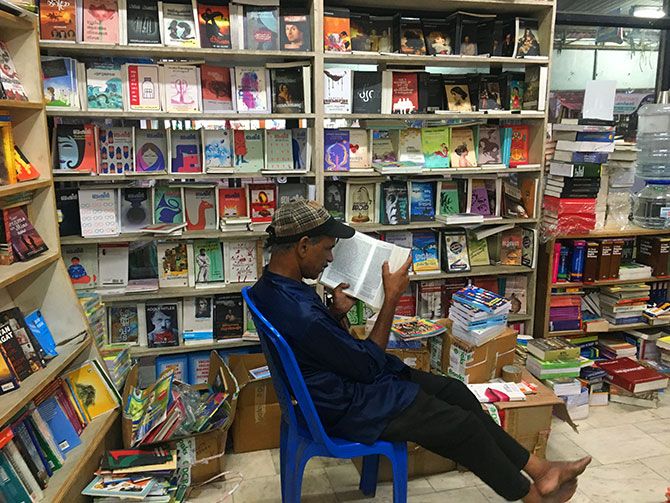 IMAGE: A bookstore in Kalpetta. There are hardly any job opportunities for young people. The government aims to skill 1.25 lakh people. Photograph: Seema Pant for Rediff.com

What is the unemployment rate? Do young people have opportunity here?

The educated community, the number of graduates and post-graduates is less because institutions are few and also because people are poor.

Wayanad has a potential for tourism, because the hospitality industry is flourishing for so many years and that will get intensified in the coming years.

So what are you doing about it?

We are very particular about the environment. Nearly 80 percent is covered by either forest or plantation. Hardly 20 percent is for living.

We have to preserve this land in its pristine nature, so whatever tourism activities that will take place will be done keeping this in mind. 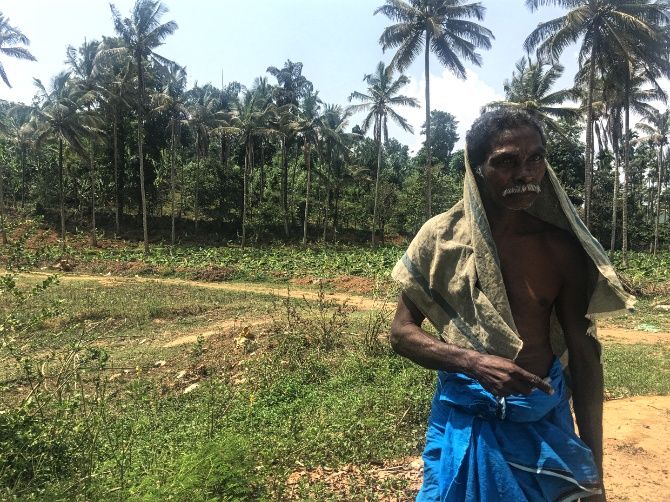 IMAGE: Wayanad district has the largest tribal population in Kerala. Nearly 80 per cent area is covered by either forest or plantation. Photograph: Seema Pant for Rediff.com

What are the issues of administering Wayanad? As an administrator, what are the challenges that you have faced?

Wayanad is one of the districts with the highest tribal population in Kerala. They are 1.5 lakhs to 1.6 lakhs tribals in this district.

There are many welfare schemes for this community that are being implemented -- but most of the tribal community lives in mountainous areas, so whatever facilities we will provide, they may not be adequate for their needs.

The major issue among tribals is malnutrition and anaemia. Another major issue is housing. We are making all arrangements to see that their issues are addressed.

In fact, before the elections, this district was selected as an aspirational district. Under that banner also, we are trying to mitigate this issue through some CSR funding.

To address malnutrition, we have tied up with BPCL who will provide a mobile ambulance to provide nutritious food to all lactating mothers and adolescent girls in every taluk.

The state government is also providing these things, but the tribal community does not like the nutritional mix being provided.

We have chalked out a plan that the nutrient value will be taken care of, but with the kind of food they like.

What are the challenges that the collector of an aspirational district has? Would you be under scrutiny from the Centre?

As an aspirational district, one of the main challenges is health and nutrition of the tribal community. We have already framed a plan and we will be switching over to action within a month or two. Everything is ready.

Another major issue facing this district is connectivity itself. There is no railway station because of the hilly terrain.

Our only connectivity to Kozhikode is by road and because this road passes through the forest area, the development of this area is little difficult. The forest cannot spare more land for this.

On the other side, the connectivity to Bengaluru is also a challenge because we share borders with Karnataka and Tamil Nadu.

We are planning to set up an airstrip, not an airport, so that in case of an emergency evacuation can be done by air.