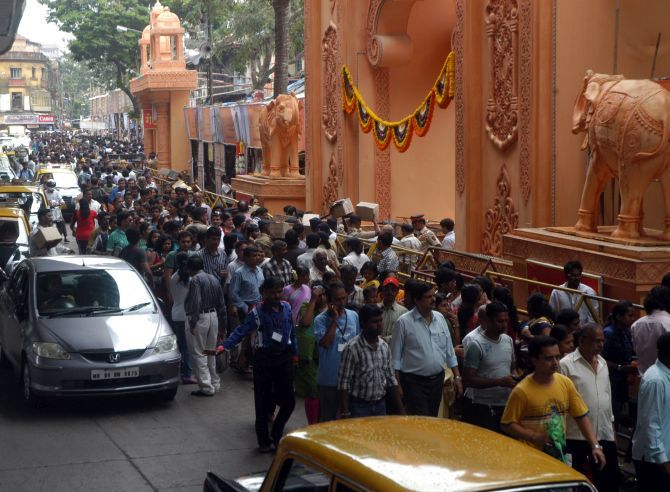 'The mandals and politicians are trying to project that this is against somebody. We are not against anybody. We do not want the celebrations to stop. It has to happen, but do it in a civilised way.'

Dr Mahesh Bedekar, a resident of Thane in Maharashtra, filed a Public Interest Litigation in the Bombay high court in 2010, asking that Ganesh and Navaratri pandals in Mumbai and its outskirts be banned from encroaching on roads and public spaces and be prevented from playing loud music.

The issue has been fiercely discussed in the print and television media. A judge hearing the case has already said that festivals cannot take away the citizen's fundamental right to silence and right to functional roads and pavements. The verdict is expected on August 12.

Dr Bedekar, image, below, spoke to Syed Firdaus Ashraf/Rediff.com about what led him to file the case.

What is your case in the Bombay high court about?

This is a public interest litigation which talks about changing the nature in which we celebrate our festivals.

I am also a religious person and I celebrate all types of festivals including Ganpati, Navratri and Dahi Handi (Janmashtami, the celebration of Lord Krishna's birthday in Maharashtra).

In the last 15 years I have seen a radical change and politicalisation of these festivals. This is happening in the name of God and religion which I thought was not right.

Our petition raises the basic question that the roads are for traffic and pedestrians. Can you allow such big pandals on the roads? There is so much noise pollution during these festivals. And the songs that are played during the festival are not acceptable to any religion.

We have asked certain questions like: Can we allow these types of celebrations in public places? We are not against any religion or any pandal or any specific celebration.

Our petition says we have to celebrate all festivals -- celebrations are important. But this is not the way. Lokmanya Tilak started this (Ganesh) festival with a different motive and we don't think that is achieved right now.

The Ganesh festival is only for 10, 12 days. What is the problem then?

We have no problem even if they have it for 15 days. But can you have Sunny Leone songs playing during Ganpati?

Can you have the Munni Badnam Hui song on the roads in the name of Ganpati?

We have seen processions on the roads and the way people dance. This cannot be acceptable to any religion.

I get phone calls from all over Maharashtra where people say we agree with what you are saying, but we do not complain because there is so much of political interference and therefore we have no guts to come out in the open.

Why did you take on the pandals?

Our family runs a hospital which is 70 years old. I am a third generation doctor. We have two marriage halls in front of our hospital. The huge marriage processions were disturbing our patients. We kept telling them to stop as the patients were getting disturbed. They did not listen, neither did the police. So I went to the noise pollution board.

Then I thought if it is disturbing me, then it must be disturbing other people too. At the same time, Dahi Handi celebrations were happening. As an educated person, I did not like what was happening on the roads in the name of religion.

I wrote to the police commissioner and the municipal commissioner. They said whatever you are saying is right -- the rules are there, but unfortunately nobody is doing anything about it. So I thought, as a civilised person, I should go to the courts. The court also gave certain directions.

This is a petition that I filed in 2010. Now it has come to a level where a final order is expected.

Unfortunately, the mandals and politicians are trying to project that this is against somebody. We are not against anybody. We do not want celebrations to stop. It has to happen, but do it in a civilised way. You cannot do it in the name of Tilak.

He started this with a very different intention and everybody will agree that those intentions are not matched nowadays. Tilak started this so that people will come together and there would be social change.

Do you have any political affiliation?

I am a common man, being a doctor comes later. As an educated common man, I could not digest such things. So I went to court. In a civilised society you can go to court -- let the court decide.

If I go to the politicians they will not listen to me. All politicians have come together against this petition. But we are absolutely not against them or any mandals.

We just have asked certain questions. You tell us what are roads for? What about noise pollution during the festivals? And I am not saying this, it is in a WHO (World Health Organisation) report submitted to the Supreme Court.

WHO has given clear-cut guidelines that there are so much hazards due to noise pollution. We were asked to give examples and so we named the Ganpati, Navratri and Dahi Handi festivals. 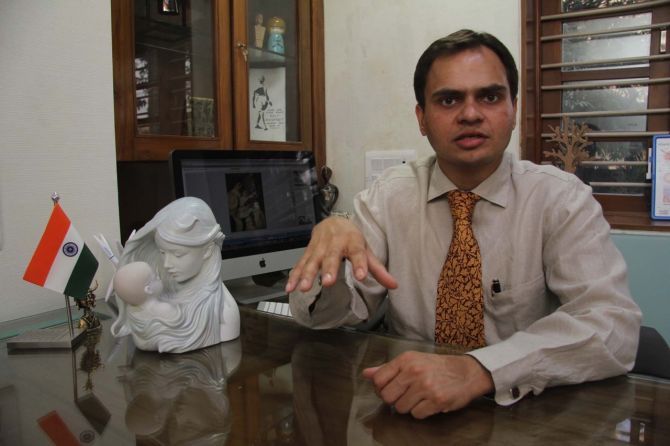 Why not file a petition against the azaan from mosques for noise pollution?

A petition was filed earlier by activist Sumaira Abdulali. That issue has been solved, but the police have to act. The Supreme Court has given a decision for not only azaan, but stated that no religious institutions can have loudspeakers facing outside.

If the orders are not followed, local people should complain. Every time you cannot go to court. People can go to court and ask why it has not been implemented.

You are saying that the courts have said azaan from mosques is not allowed.

There is a clear-cut decision that no religious place can have loudspeakers facing outside. There is also a mention that azaan cannot be played on loudspeakers. These orders have to be implemented by the police. People cannot go and stop that.

I don't want to bring a religious angle into this. I am not against this or that. I absolutely agree that azaan should also stop. This is not about religion -- no religion will agree with what is happening today.

Have you received threats for pursuing this case?

All kind of pressures are there. My intentions are very clear, I am not a politician and I am not going against any political party. My locality (the hospital area) is very quiet. Our locality was one of the noisiest localities seven, eight years ago back, but now it is the quietest place. This happened because of my first PIL.

Which was the first PIL? How many PILs have you filed?

My first PIL was for the implementation of noise pollution norms in Thane city in 2009. After that, areas near hospital were notified as silent zones. Another PIL is for implementation of a hawking policy in Thane. That is still pending.

The third one was for NOTA (the None of The Above Option on Electronic Voting Machines). It was clubbed in the Supreme Court and we got a favourable decision.

Don't you think you should have given some time this year because the state government and civic body are not ready to implement the law on pandals as the Ganesh Chaturthi festival is a few weeks away?

This has been started five years back. How can I give time to anybody? I am a common man. The court has to decide and the government has to decide. We have asked certain questions to the court. And the courts are giving a judgment.

Who is going to listen to me? This is not a personal fight. I am a very busy doctor and happy with what I am getting today. But as an educated person I asked some questions.

My PIL is an appeal to all political parties and mandals. Don't try to politicise this issue. We don't want to fight on this issue. Try to understand the issue and let us come to some solution. I also want celebrations, but people should not get harassed by these things.

Do you bring an idol of Lord Ganesh home during the Ganesh festival?

We used to bring a plaster of Paris Ganesha home till about six years back. Then we thought that PoP is hazardous, now we bring an Aashta Daatu (eight-metal) Ganpati. We have a one-and-half day Ganpati (he celebrates the festival for a day-and-a-half). I am a religious person and follow all festivals.

Why has the commercialisation of religious festivals occurred?

It has been totally hijacked by politicians. They take over the roads, you get a DJ and people will start dancing. The whole purpose is lost. The festival has become an event -- a dancing event. That's fine, we are not against that. Go to a ground and do whatever you want to do. It is a free country, but you cannot do this on public roads.

Were you personally obstructed while travelling during the Ganesh festival?

Not only during Ganpati, but even during Dahi Handi, all major roads in Thane are closed. All patients suffer. There are small children and pregnant women. There are ambulances having problems and people don't care.

Now there is so much awareness. If you read the Marathi press everyday there is an article stating this is not the way that we must be celebrating. At least educated and civilised people are asking questions and saying that what is happening is not right. We have to change and that was the intention.

What is the status of the case?

Political parties have made this issue one about protecting the rights of Hindus.

Some have unfortunately asked me to go to Pakistan. They are saying they have power, they have money and they have the press. We are not against them. Please try to understand the issue and let us come up with something positive.

Who asked you to go to Pakistan?

They said those who feel this is not right should go to Pakistan.

Did you get threatening letters or phone calls?

I will not disclose that.

My father is absolutely behind me. This is a question of religion, and political parties are involved, so naturally there will be opposition and pressure. We are doing this with good intentions.

If the court gives a decision in our favour or against us, we will follow that. The judgment is scheduled for August 12 and we will wait for that. 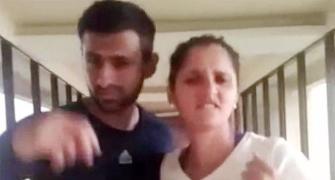 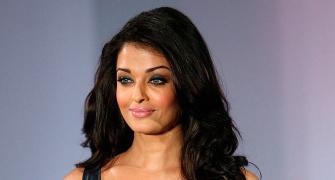 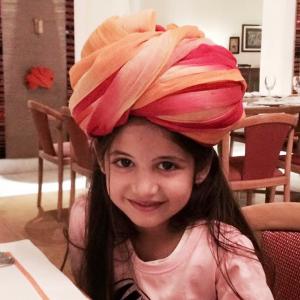 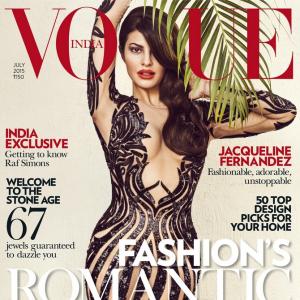