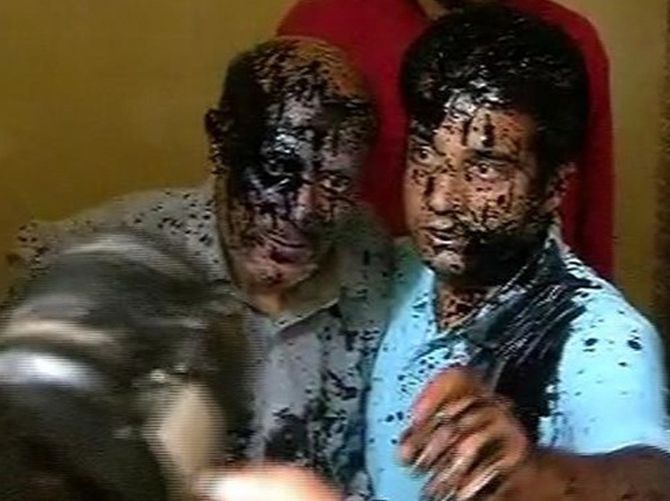 'Communal tension and violent mobs have been part of our country. What has happened since the BJP came into power is that individuals or group activities asserting Hindutva have become louder, more aggressive.'

'Now we are finding ourselves in a country where reasoning and thinking have no place, the power lies with the goons.'

'I find any ban, whether on what we write, what we eat, how we dress etc absolutely abominable. They have no place in a democracy.'

Sahitya Akademi Award winner Shashi Deshpande was the second writer after Nayantara Sehgal to protest against the Sahitya Akademi. She resigned from the Akademi General Council for not reacting strongly against the killing of Kannada writer Professor M M Kalburgi.

Deshpande, a recpient of the Padma Shri, won the Sahitya Akademi Award for her novel Long Silence. She has written several novels and collections of short stories and books for children. She is the daughter of the famous Kannada dramatist and writer, Sriranga.

Deshpande, below, left, tells Shobha Warrier/Rediff.com why she chose to protest.

You wrote while resigning from the Sahitya Akademi General Council: Silence is a form of abetment, and the Sahitya Akademi, which should speak for the large community of Indian writers, must stand up and protest the murder of Professor Kalburgi and all such acts of violent intolerance.

You wrote, 'all such acts of violent intolerance.' What were the other acts that disturbed you as a writer? Was Professor Kalburgi's murder the last straw for you to react and resign?

I would not say that Dr Kalburgi's death was the last straw. It only brought the fact of what is happening close to me. When something happens close to home, suddenly we feel it more strongly.

The fact that Dr Kalburgi was killed in Dharwad hit me hard, because it is my hometown and was always a civilised and peaceful place, where education, literature and music dominated.

Were you protesting against the Sahitya Akademi or the Narendra Modi government at the Centre?

My protest in my letter was against the Sahitya Akademi. I am concerned as a writer with the Akademi. I thought that as the premier literary institution in this country, it should have said something about the murder of a man who had been part of it, had been an awardee. The total silence mystified me and eventually angered me.

Had the prime minister reined in the fascist elements or spoken against such acts of intolerance in his Mann ki Baat, would you have reacted differently?

I would still have protested against the Akademi's silence. As a writer, it mattered to me that the Akademi speak on behalf of a writer murdered for the opinions he held. Though, perhaps, if the PM had taken control, Dr Kalburgi would not have been killed at all.

Do you feel communal tension and violent acts by mobs have increased ever since the Bharatiya Janata Party came to power at the Centre?

Communal tension and violent mobs have been part of our country whichever government is in power. What has happened since the BJP came into power is that individuals or group activities asserting Hindutva have become louder, more aggressive.

The government seems to have nothing to do with it, nevertheless one feels that these people are now bold because know they can get away with whatever they are doing.

It is as if the enemy's face keeps changing, as if they are wearing masks and disguises, while the government keeps its hands clean.

On one side the prime minister is talking about development and on the other side, we see horrifying incidents happening. How do you look at the dichotomy of the situation?

Obviously, I am very upset about this dichotomy. I remember the days when I was young -- we were in a sad state economically, economic development was nowhere in the picture. Nevertheless, there were some values in public life, there were people who spoke up for what they thought was right, the word culture was not used so much (unity in diversity was what was more spoken of) and the word intellectual was not a dirty word.

Now we are finding ourselves in a country where reasoning and thinking have no place, the power lies with the goons and the two major parties indulge in a 'tu tu main main' kind of debate.

Corruption is rampant, violence has increased, intolerance is at a super high level. What is the use of economic development if we are unable to live together in peace and harmony?

What we need is not to make the rich richer, but to do away with poverty and create an atmosphere in which people can go about their lives with confidence, leaving their religion at home.

Bringing religion into public life is a dreadful mistake.

Communal violence and the interference of the powers that be in administration, for example, even the running of Sahitya Akademi were there even when the Congress was in power. Why is the intelligentsia very angry with the BJP?

There were dissenters even during the Congress era. There was total disillusionment and disappointment at the corruption in the Congress and its total lack of any vision for the country.

I can only speak for myself and I know that I am against violence, intolerance and corruption -- it makes no difference which party is ruling the country. The truth is that the two major parties are but two faces of the same coin.

Other than grabbing newspaper headlines, will writers returning the awards have any impact on society and the government?

I am very sorry that you think writers are 'grabbing' headlines. It is the media which decides what is headline material and what is not. When I wrote to the Sahitya Akademi, I had absolutely no idea that it would become a movement and reach this stage. I was only expressing my disappointment with the Akademi.

As for what impact writers returning awards will have, (by the way, I have not returned either my Sahitya Akademi or my Padma Shri. I think that the Akademi award was given to me by fellow writers who chose my book and the Padma Shri by my country) I know that it may not have much impact, the movement may just peter out.

Nevertheless that for the first time writers all over the country and writing in so many different languages are coming together, that they are protesting, that they are making their voices loud and clear should be a significant moment in the country's history.

For too long in our country the word 'intellectual' has been devalued, it has become a way of expressing contempt for a person. But the country needs thinkers. Thinkers and doers have to work in tandem. Therefore this is a good moment. And people who are saying derogatory things about the writers' protest forget that writers and journalists are a very important part of a democracy. 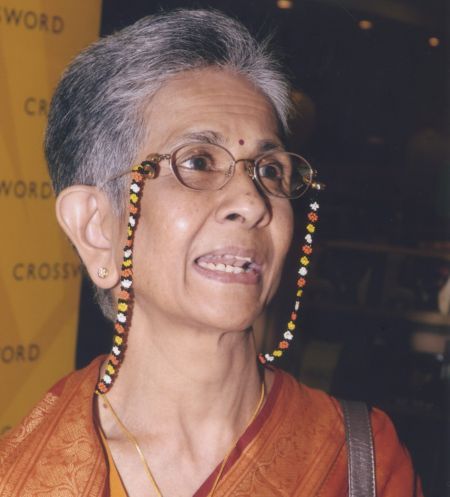 For me, more important than returning the awards is for writers not to hanker after awards and positions, which has made them unable to assert their independence. I think the government should not be a patron of writers, that what the Sahitya Akademi should be doing is to build up and support a community of writers. Only they can bring together writers in all the languages in India.

As an independent thinking writer, how do you look at the bans that we see today? Are you disturbed by the way the State is interfering with what an individual eats, wears and how he lives?

I find any ban, whether on what we write, what we eat, how we dress etc absolutely abominable. They have no place in a democracy. We have a Constitution, we have our laws; only these can control us. And the laws are made for the public good, for the welfare of people living together.

Our country is one of many religions, languages, castes, beliefs etc, nobody has the right to tell anyone else what to do.

I am a total vegetarian, but I will defend the right of anyone else to eat what s/he wants. What should be banned is cruelty, intolerance and what is so common in our society -- a total indifference to others' comforts.

You said in your essay: I am forced to admit that writers in our country are, unfortunately, not playing the role that we should be playing. The mystique surrounding the writer has all but disappeared.

Is it not because they take sides and society does not perceive them as unbiased independent thinkers?

I think there are many reasons for writers having lost their roles. It is not because we take sides. Of course, like all citizens, writers have the right to their beliefs, the right to support any political party, to join any organisation they want to etc.

What has damaged writers' credibility is that writers themselves have lost the stature they earlier had.

Desire for prizes, self-promotion, desperation for success, all these have eroded people's faith in the writer as a thinking person who has something to contribute to society.

If one is too busy looking after oneself, how can one care about the world?

Besides, most writers today have no idea of providing intellectual leadership. And their voices are drowned out by the cacophony of voices -- the media, celebrities (film stars and sportspersons are more often asked to speak about public matters than writers) and politicians.

Politicians with their screaming and ranting debates have made it impossible for any reasoned debate on any issue of importance. The country has become an arena for the two major political parties to snarl at each other, to blame each other.

Our literature, too, is divided on the basis of language, religion, caste, and gender. (Women writers are always less important, their works are marginal.)

The one thing that is happening now which seems wonderful to me is how writers in all the different languages, writers from different parts of the country, are coming together.

Do you feel because of the way books and writers are marketed, writers of today have lost credibility and writing has become another profession and a means to make money?

I think it's not just because of the promotion and marketing writers have to do, it is also because when there are so many voices speaking now, the writers' voices are lost.

And yes, of course, when you see a writer relentlessly promoting herself/himself, you cannot have the same feeling about the writer as you would about one who stayed a distance from these activities.

I also think that the writers of today are themselves not interested in playing any role in society. The idea of a writer having a social role to play seems to have been lost.

Do you feel it is not writers, but the faceless people on social media that gives voice to the voiceless now?

I agree that social media is a power to reckon with now. Nevertheless, it (social media) is about what happens now, today. Writers work differently. There is a larger context to the things they say.