'I am hopeful of getting all six seats from Nagaland, Arunachal Pradesh and Manipur, either for the BJP or with our allies.'
'The same is true about Meghalaya.'
'We will have to work hard in Mizoram and in Tripura.'
'In Assam, we won seven seats. In 2019 election, we will add to this number.' In the second part of his exclusive interview with Rediff.com, Sunil V Deodhar -- the Bharatiya Janata Party leader who masterminded the BJP's historic victory in Tripura -- tells Prasanna D Zore how his party will sweep the north east in the next Lok Sabha election, why he believes Manik Sarkar is a "dishonest person" and more...

You mentioned the 'so-called' honesty of former Tripura chief minister Manik Sarkar? Do you doubt his honesty?

I don't doubt it. I believe he is a dishonest person.

Honesty doesn't mean what amount you have in your (bank) account. Or if your wife is travelling by autorickshaw. These are not the criteria to define honesty.

If you are a chief minister, or when you are in power, and all your ministers are indulging in huge corruption and siphon off central government funds and depositing that money into the fake accounts of party cadres and you are doing nothing (about it). Isn't this dishonesty?

In the last 25 years, barring this (February 2018) election, they (the Communist Party of India-Marxist) won the elections only by rigging (them), by booth capturing and forcing people to vote for the CPM. This is dishonesty.

How can I call a person honest when this person gets elected dishonestly?

I don't believe in this illusion, and I would say an illusion specifically created by the media.

Earlier, I too thought in the same manner, but when I went to Tripura and stayed there for six months continuously, I met people, I discussed issues with them, and then I understood that whatever I had heard about Manik Sarkar in Mumbai or Delhi is not true.

If you say he travels by a cycle, then Tripura people have not seen him any day travelling on a cycle.

If you say he travels by train to Bangalore because flight tickets are costly and say that our state is a poor state... news came once that he travelled to Bangalore from Calcutta by train... but in Tripura, he would use a chopper even if he had to travel just 40 kilometres and the expenditure of Manik Sarkar's travel by chopper stood at Rs 10 crore.

How can you say that he is a poor chief minister? 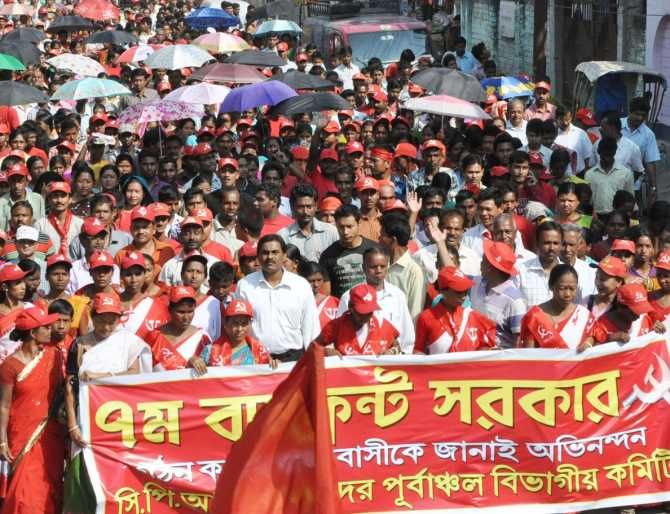 IMAGE: Communist Party of India-Marxist workers celebrate the CPI-M victory in the 2013 assembly elections in Tripura.

Now that the BJP is in power in Tripura, how will you check the swindling of government money that you allege took place during the CPI-M's tenure?

Nobody will be spared. Our line all over the country is good governance and that means zero tolerance to corruption.

If there is corruption, then you cannot call it good governance.

Good governance means there should not be corruption.

That is why we will try our best to reduce corruption in the state. Whenever we find any past wrongdoings we will not spare them.

According to my information, three to four government officials are suspended by Chief Minister Biplab Deb because there were corruption charges against these officials.

Similarly, there was huge corruption by the government, its ministers and CPM workers in a scam called Rose Valley and definitely when an enquiry will be set up, anybody found guilty will be punished.

Now that you have got a strong foothold in Assam and Tripura and a backdoor entry into the government in Meghalaya and Manipur, how crucial will be the 25 north east seats Lok Sabha for the BJP given that the party seems to be losing its momentum in the Hindi heartland?

If you look at Assam, we won seven seats. In the 2019 election, we will add to this number.

I am hopeful of getting all six seats from Nagaland, Arunachal Pradesh and Manipur, either for the BJP or with our alliance partners. The same is true about Meghalaya.

We will have to work hard in Mizoram and in Tripura. I am sure that both seats will go to the BJP; not the alliance, but to the BJP.

In Sikkim, the Sikkim Democratic Front is already a part of the NDA.

We will win more than 20 Lok Sabha seats from India's north east. 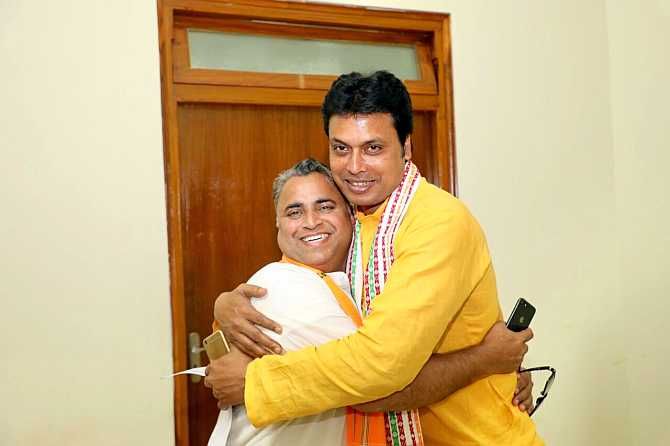 Is your alliance with the IPFT (Indigenous Peoples Front of Tripura) the main reason for the BJP's success in Tripura? How significant a role did this alliance play in the BJP sweeping the Tripura elections?

I will have to admit -- and it is the fact, the truth -- that our policy before the election was to unite all the anti-CPM votes.

To defeat the CPM in Tripura it was important that there should be no division of votes.

That is why when the Congress and Trinamool Congress (Mamata Banerjee's TMC) people (voters) realised that the BJP is the only alternative, both parties were almost dissolved and people (leaders) belonging to both the parties joined the BJP.

The only party remaining was the IPFT. The IPFT had their demand for a separate state (Twiparaland).

We convinced them to leave this demand and come with us and we had a joint declaration in which there was no demand for a separate state.

The joint declaration talked about addressing the linguistic, socio-economic, financial, and cultural problems faced by the tribals and find out why this demand (of a separate Twiparaland) had come.

That is why one communiqué was given by the home ministry that a committee will be formed in which all (political) parties, some NGOs, central government officials, retired judges and this committee will visit Tripura and listen to the people, all sections of society, tribals, non-tribals and they will table their report in one year.

The next course of action will be decided after the findings of this committee are tabled.

The IPFT was convinced, and now they are in the government.

The government is running peacefully and there is no conflict between the two parties. I am hopeful that this government, this alliance, will last for five years without any disturbance.

What are the most important steps the BJP government in Tripura will take to uplift the lot of the dukhito, vanchito and lanchito (the oppressed, the dispossessed, the discriminated against) as you have often been ridiculing Manik Sarkar for giving the same speeches from the time he became chief minister in 1998?

People said we are not interested in staying dukhit, vanchit, lanchit...

They have rejected the CPM. Now, why did these people reject the CPM?

In the last 20 years because of CPM policies, the indigenous tribals and people of the state completely lost their pride.

Their position was like that of third class citizens in their own state.

They knew that the BJP alliance with the IPFT will give them pride in their own state and along with their pride, their development, language, culture, importance and existence in Tripura will be secure.

The first thing we are going to do is include the Kokborok language in the Eighth Schedule.

Then there will be direct funding to the district councils from the Centre and many more programmes to uplift the state's downtrodden people.

The cost of training officers of the Tripura public service was borne by the government, but the Manik Sarkar government stopped it.

So, we may start it again so that dynamic youth from the scheduled caste (and scheduled tribes) will come ahead and get an opportunity to progress.

The CPM -- which is a commission-khor (corrupt) party -- would take commissions from the people to avail government loans. Our government will put an end to this practice.

The standard of living of the scheduled caste people will be at par with all other communities.

The main problem is that of unemployment and the unemployed registered.

Those who have passed the eighth class in the state, are at 7.25 lakh and 2.5 lakh of those who have not registered because they could not pass class eight.

Almost 10 lakh, or one-third population of the state, are unemployed.

Our agenda is development so that these people could get jobs and income.

With the development of bamboo farming, rubber, food processing units, tourism, floriculture and similar other sectors, Tripura can become self sufficient and self dependent.

In the next five years we are confident that we will achieve this goal.

The third issue is that of law and order.

Who suffers because of a deteriorating law and order situation in the state?

The dukhit, vanchit, lanchit... Poor people are dependent on police stations for every small thing.

During CPM rule the police stations were party offices.

Without intimating the CPM you could not even register an FIR. But that practice has come to an end now.

Now the police is free (of political pressure).

Now, the police do not belong to the BJP or CPM; they are independent.

A criminal is a criminal and a criminal has no party and this is our slogan (in the state).

Even if a criminal belongs to the BJP he will not be spared?

Obviously, (the criminal will) not (be) spared.

Tapan Deb Barman, who is an IPS officer, is already under arrest.

Will you assure the people of Tripura that the investigation into these murders will be time bound?

When there was a rally for demanding a CBI inquiry into Gauri Lankesh's murder he walked with the rally in Agartala.

But when rallies came out demanding a CBI inquiry into the death of these two journalists, he stayed away. He did not accept the demand for a CBI inquiry.

We had promised we will have the CBI investigate the murders of the two journalists. I would like to happily inform you that at the very first cabinet meeting that decision has been taken and the cases have been handed over to the CBI.

But the government hasn't initiated a time-bound inquiry?

'Manik Sarkar is a dishonest man'

BJP's agenda for Tripura and its alliance with the IPFT

On justice for journalists killed in Tripura

Is the BJP on backfoot over corruption charges? 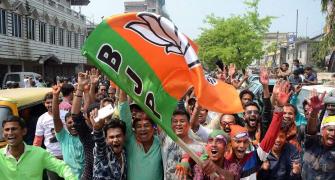 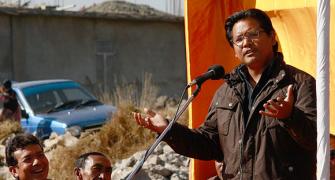