News
Business
Movies
Sports
Cricket
Get Ahead
Money Tips
Shopping
Sign in  |  Create a Rediffmail account
Rediff.com  » News » 'BJP wants to take us back to the 19th century'

'There are no jobs, the economy is slowing down, but the BJP is more concerned with issues like triple talaq, anti-Romeo squads and the beef ban.' 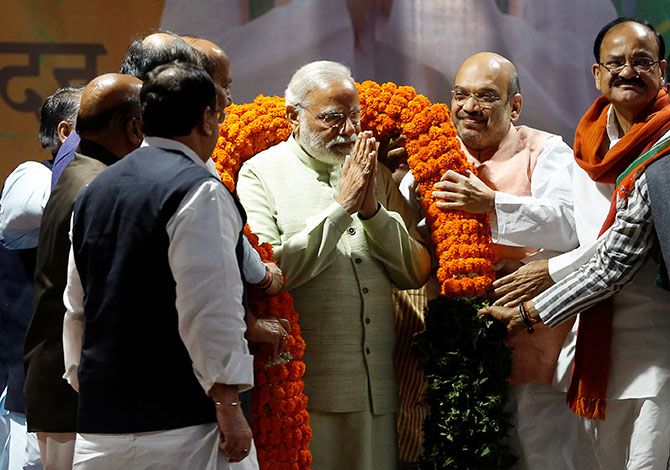 "Where the country is headed is a matter of concern," Congress leader Digvijaya Singh tells Amit Agnihotri.

Winds of change are sweeping through the Congress.
States like Goa, where the party could not form a government despite emerging as the single-largest block in the assembly polls, and in Karnataka, which will hold assembly polls next year, have been taken away from your charge.
Do you see any link between events in Goa and these changes in the party?

No. The decision to bring about changes in the All India Congress Committee has been taken by party President Sonia Gandhi and Vice-President Rahul Gandhi.

It is a process of reform in the AICC. There is no question of me or anyone else feeling otherwise.

As for Goa, the Bharatiya Janata Party formed the government through the back door by buying the support of regional parties.

It was helped by the state governor who did not invite the Congress first to form the government.

What is your assessment of the Manohar Parrikar government in Goa? strong

Politics in Goa is usually marked by mobility.

Governments have been formed, toppled and formed again.

The game goes on.

In the past, only two governments -- that of the Congress led by Digambar Kamat or the previous BJP one led by Manohar Parrikar and later by Laxmikant Parsekar -- have completed full terms.

There is huge support for the Congress in the state. I see no reason why we should not win there.

I am sure the new general secretary in charge, K C Venugopal, will take a call on what to do.

I think some changes are planned in the state unit where PCC (Pradesh Congress Committee) chief G Parameshwara has been a minister.

You have been in the news recently over your allegations that the Chhattisgarh government was hand-in-glove with the Maoists. Can you explain that?

Whenever there are polls, especially since 2003, there is evidence that the BJP leaders strike a deal with the Maoists through the local traders.

I have said this earlier and I stand my ground.

During my term as chief minister of Madhya Pradesh, I eliminated traders who had become middlemen between the government and Maoists.

I am saying this with authority. Further, I am surprised that the support that the CRPF (Central Reserve Police Force) should get from the police is missing in the state.

For instance, in the latest attack in Sukma in which 25 CRPF soldiers were killed, there were intelligence gaps.

The CRPF camp was just 2 to 3 km away from the site where the attack took place, but there was no intelligence about Maoist movement in such large numbers.

There is no understanding between the police and the CRPF.

You dropped another bombshell alleging the Telangana police was encouraging Muslims to become radicals...

There was a counter-terrorism meet in Delhi where this subject came up.

Chiefs of anti-terror bodies from some states raised the issue of a fake portal being run by the Telangana police, which is attracting radicals among Muslims.

The police is saying such criticism will affect the morale of the force, but is not denying the existence of the portal.

The Telangana police is encouraging Muslim youth to get radicalised and then arrests them. It has arrested 10 to 12 such youth in the past.

Sonia Gandhi is busy forging Opposition unity over the Presidential polls to counter an aggressive BJP under Prime Minister Modi. Is it a good strategy?

It is a historical fact that whichever party is in the Opposition tries to put up a candidate for the post of President.

Credit goes to Sonia Gandhi that she is talking to various Opposition leaders to bring them on a common platform.

If regional parties like the Shiv Sena, the AIADMK (All India Anna Dravida Munnetra Kazhagam), BJD (Biju Janata Dal) and the Shiromani Akali Dal can work out a compromise candidate, I think that person stands a fairly good chance to win.

The Congress has said it has an open mind if Modi consults the party over his presidential nominee.

The prime minister should reach out to the Opposition like (then prime minister) Atal Bihari Vajpayee did to enlist support for the NDA's (National Democratic Alliance) Presidential nominee A P J Abdul Kalam in 2002.

Modi should make a similar effort. Though he is not used to consulting the Opposition on key national issues, this is an opportunity for him to prove otherwise and get an image makeover.

Another issue that has united the Opposition is faulty electronic voting machines. Do you support the view, as some veteran Congress leaders think otherwise?

In the age of technology, nothing is tamper-proof.

The Uttarakhand high court is looking into the issue, the Uttar Pradesh government has said smartphones were used to steal petrol from petrol pumps

In the case of EVMs, who develops the software, who makes the chips?

EVM tampering can be done selectively.

When is Rahul Gandhi getting promoted?

At present, he is focusing on poll-going states and party changes in a phased manner.

It seems there is not going to be any big-bang AICC reshuffle. Party polls are due.

To me, whether Rahul becomes party chief through a CWC (Congress Working Committee) decision or via internal elections does not make a difference.

He should have taken over as party chief yesterday. The earlier that happens, the better.

The BJP practices the politics of hatred and communal divide.

The very idea of India is under threat.

There are no jobs, the economy is slowing down, but the BJP is more concerned with issues like triple talaq, anti-Romeo squads and the beef ban.

Where the country is headed is a matter of concern.

The BJP wants to take us back to the 19th century.

What we need is a liberal and modern mindset. Only a national party can take on the BJP.

It is a great opportunity for the Congress to regain its strength for which the party has to restructure and re-engineer its strategy, fight back and defeat communal forces.

The challenge would be to re-strengthen the organisation across states and bring together like-minded parties simultaneously. 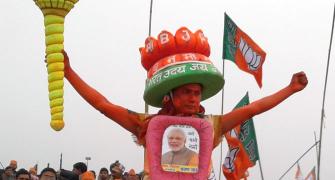 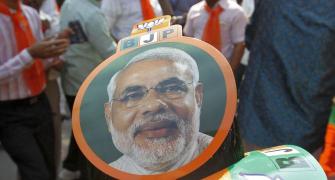 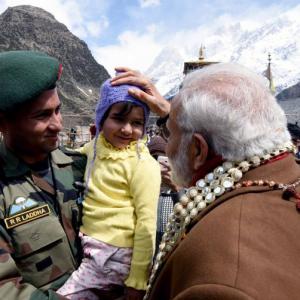