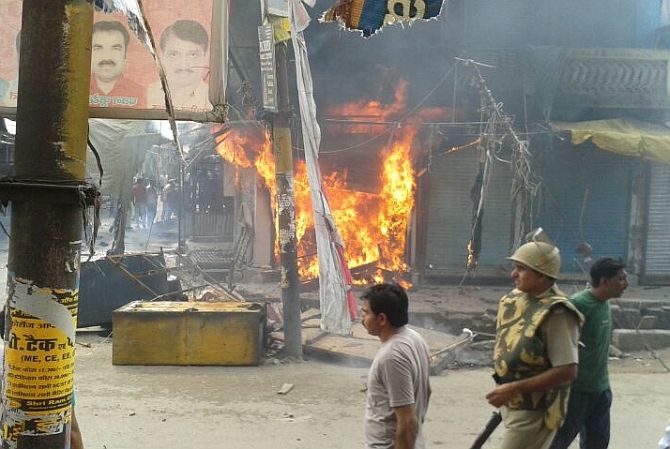 'The simmering discontent in UP is there for months together. The state government is solely responsible for whatever is happening there.'

'The RSS has been around for more than 80 years and there is evidence to suggest that the RSS, in fact, is the harbinger of social harmony and peaceful community life...'

'There is nothing like the Sangh agenda or the BJP agenda... we believe only in the Nation's Agenda,' newly appointed BJP Vice-President Vinay Sahasrabuddhe tells Prasanna D Zore/Rediff.com

Considered the eyes and ears of the Bharatiya Janata Party's recently-appointed President Amit Shah and a key member of the BJP-Rashtriya Swayamsevak Sangh think-tank, Dr Vinay Sahasrabuddhe, right, below, who was appointed the BJP's national vice-president on August 16, gives Prasanna D Zore/Rediff.com a glimpse into how the party plans to shape its future in the days to come.

Could you give us a glimpse into the mind of Amit Shah?

The true reflection of his mind is in his speech which he delivered before the national council.

He is not only an excellent organiser, but also a leader with a clear vision. He has his own plans to take the party to a particular level. After all, he is the president of a national party, which is ruling at the Centre. So, naturally, he has applied his mind to all aspects of national life and his speech reflects his thinking.

In a way, the way he meticulously planned the campaign in UP and the work he carried out earlier in Gujarat while handling several departments is a testimony of his organisational mind and strategic thinking.

What is your impression of the man?

He is a no-nonsense person. He wants results. He wants everybody to be given some work. He always insists on owning the task, owning the responsibility. That has been his style of functioning. One gets a sense that the RSS forms a dominant part of BJP President Amit Shah's team. That has led many people to believe that the RSS will now push its agenda through the government...

(Laughs) Our very existence is thanks to the ideology that we adhere to. In that sense we have an organic relationship with the Rashtriya Swayamsewak Sangh.

The point is when the Jan Sangh was founded, ideology was at the core of the process; so also when the BJP came into existence in the 1980s. Then again it was ideology that shaped the events of those days. It had very clearly something to do with our relationship with the RSS.

Given this fact, there need not be any surprise that we are here to pursue the ideology of nationalism, of nation-first, the core of which we share with the RSS and Sangh-inspired organisations.

Therefore, there is nothing like the Sangh agenda or the BJP agenda... we believe only in the Nation's Agenda.

We are here to serve the cause of the people and the nation.

There were newspaper reports that the BJP is trying to communalise voters in Uttar Pradesh.

The simmering discontent in UP is there for months together. The state government is solely responsible for whatever is happening there. Our leadership has time and again appealed to maintain peace.

RSS Sarsanghchalak Mohan Bhagwat declared that India is a Hindu Rashtra. Don't such statements strengthen the belief of many people that the BJP will push the RSS's agenda?

This is the considered view taken and expressed by the RSS leadership very often, regardless of who is ruling at the Centre. There is nothing new and hence hardly anything newsy about this.

This is a vigour newly found by the media. See, all the RSS-affiliated organisations come to the limelight only when the BJP is in power. Do you mean to say that they are not functioning when the BJP is not in power? They have been there all along, which is why they can carry that kind of clout today.

So, the minorities in India doesn't have anything to fear from the RSS?

This question is often asked thanks to the conspiracy of canard and calumny.

The RSS has been around for more than 80 years and there is evidence to suggest that the RSS, in fact, is the harbinger of social harmony and peaceful community life.

The RSS has activists and supporters in all communities. These allegations about fear among the minorities are rubbish.

In Maharashtra, there is lot of friction between the Shiv Sena and the BJP over seat sharing even as the assembly election approaches. How do you see the electoral battle panning out in Maharashtra?

In every alliance there is always some amount of friction. Every time any political party enters into an alliance, some friction between the participating parties always remains. It is part of the game. But let us not forget that these alliances get into shape because both partners believe they require each other.

If that feeling is not there, alliances will not take place.

Therefore, every partner will have to be true to itself that it requires the other partner. It is the mutuality of requirement, which is at the foundation of any such alliance.

The judgment about the quantity of help required may differ and that may add to mutual tensions. These things are bound to happen.

I don't think it will have any impact upon the grassroots level alliance and the meeting of minds that is there for decades together. We are accustomed to work with the Shiv Sena and similarly, the Shiv Sena is also happy to work with us.

Specifically speaking, there seems to be an effort by the BJP to arm-twist the Shiv Sena into going for a 50:50 seat sharing arrangement.

I would certainly not use this term. There is no question of arm-twisting...

One thing is certain: The BJP doesn't believe in arm-twisting somebody or allowing somebody else to arm-twist the BJP.

Mutual respect is what we believe in and what we seek (from our alliance partners).

Dr Sahasrabuddhe, what are the three things on top of your agenda?

Now that the party is in power, what has been elaborately described and stated by our party president, the party organisation will be a bridge between the commoners/voters and the government, which we now have at the Centre.

This is the most important duty that the party and all the office-bearers at every level will have to perform. And that is a job, which requires to be carried out with requisite planning, skills and also a certain mechanism.

I believe to help the government listen to the people and to help people understand what the government is doing is one important role the party organistaion will have to play in the days to come.

So the first thing will be to be a link between the government and the masses.

Secondly, as it has been the central theme of the campaign, we will have to look into (the issues of) development and good governance. On this front, naturally, several policy issues will have to be evolved. New approaches will have to be shaped. At least in certain areas, a policy overhaul is required. A fresh look is warranted.

For example, as our party president has elaborately said in his speech, the Congress was emphasising on entitlement. Our emphasis has been on empowerment.

They (the Congress) considered that giving some rights on paper is more important, whereas we believe that conditions need to be created in such a way that neither people need to agitate nor the government would need to enact a law.

More than laws, creating a ground situation is more important. To this end, new policy formulations will have to be evolved. That will be the second most important thing, I believe, the party will have to do.

The third thing is we will have to look into some kind of organisational, political and electoral expansion of the party will have to work for.

In the entire Coromandel belt we are simply present and our impact is missing: Whether it is Tamil Nadu, Andhra Pradesh, Telangana, Odisha or even West Bengal.

The important challenge is whatever votes we have got we have to ensure that they are converted into seats and later on we get some share in the political power there (in these states). This is also going to be point of emphasis in the days to come.

Did you expect that you would be appointed party vice-president?

Not really. I was just a member of the national executive and not an office bearer at any point of time. While working with Mr (Nitin) Gadkari (the former national BJP president and currently a Cabinet minister in the Narendra Modi government) I got some exposure to the functioning of the top echelons of the party and therefore perhaps whatever exposure and experience I could get and whatever observations the leadership could formulate about my functioning must have contributed to the decision making about me.