'Muslims may turn to the BJP or may not come out to vote in great numbers like they have in the past.'
'Anything can happen.'
'They can feel an increased sense of alienation, but that depends on the BJP -- on how it includes them.' 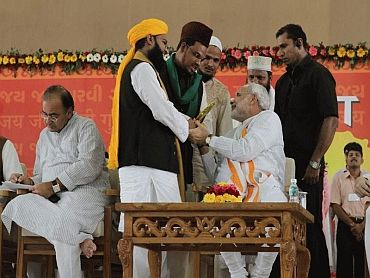 Professor Badri Narayan's scholarship has played a prominent role in the understanding of Indian politics.

The author of several books on the Dalit movement, including a highly acclaimed biography on Kanshi Ram, Badri Narayan spoke to Rediff.com's Archana Masih about what Mayawati, Akhilesh Yadav and Rahul Gandhi need to do if they want to reclaim relevance in the wake of Modi's March.

There are many aspects (of the election results) that are unexplored. We need to explore what happened and how it happened.

We still haven't received all the data as yet, we can only speak on the basis of the 'feel' of the field.

From the sense I get from the 'feel' of the field is that the BJP has been able to mobilise the MBCs (Most Backward Castes) and non-Jatav Dalits to their advantage.

A section of the Jatavs that lived in the cities and is aspirational has also voted for BJP.

The BJP has worked with the smaller Dalit castes.

There are 65 Dalit communities in Uttar Pradesh, out of that only 4, 5 are visible. The remaining are invisible, scattered and not very informed.

Whichever party is able to mobilise them, they end up voting for them.

Amit Shah has been able to create a social coalition comprising of the Forwards, non Yadav OBCs, non Jatav Dalits and MBCs.

The BJP's ascent under Modi is compared to the Congress' growth under Indira Gandhi in the early 1970s for using the weapon of populism to attract the poor -- what are the similarities and differences between the two?

At the moment, there is no parallel to Modi.

I will not say he is like Indira Gandhi because they are two personalities. At the moment the Opposition has no to response to him.

Maybe time will produce its own leader from the Opposition -- it could be Rahul, Akhilesh, Nitish Kumar.

Modi was unsettled by Rahul's remark of 'suit-boot ki sarkar' and took up the issue of poverty after that.

Maybe a time may come when the Opposition will be in a position to reply back to Modi.

But at the moment, Modi is the victor.

How do you explain the transformation of Modi -- a man seen as close to the corporate world -- to being the messiah of the poor?

When he was attacked for his embrace of the corporate world, he shifted his politics and started raising the issues of the poor.

He realised if he didn't do this, he would be finished.

He started fashioning a pro-poor image.

Modi has the quality of making people believe what he says.

With the poor on his side, does it guarantee 2019 for the prime minister?

If he is able to maintain this alliance, then 2019 becomes easy for him.

It also depends on who they select as the chief minister of UP.

If the next UP chief minister does not do good work, it will have an impact on the rest of the country in the 2019 election.

If the BJP government does well in UP, 2019 will be winnable.

Did you expect the BJP sweep in UP?

It is unexplainable. Politicians are more innovative than analysts. They adopt new methods and we analyse those methods later.

They spun demonetisation in a way that made the poor believe that the rich were the reason for their poverty.

So there was a parallel polarisation based on depravation between competing communities.

How will the Muslims read the UP verdict?

The BSP did not get the Muslim vote, it went to the SP.

In places where the BSP and SP did over-polarisation, the BJP countered it with non-Muslim polarisation.

Will this make the Muslms feel disenfranchised?

They might turn to the BJP or may not come out to vote in great numbers like they have in the past. Anything can happen.

They can feel an increased sense of alienation, but that depends on the BJP -- on how it includes them.

The BJP might become inclusive towards Muslims after this mandate -- that can also be a possibility.

What should Rahul Gandhi do now?

Rahul and the Congress have to reinvent themselves.

Rahul needs to introspect about how he can establish a connect with the people. He is serious about it and has attempted to do so.

The Congress is like a defeated army. It has to be salvaged, it needs fresh enthusiasm, new people.

It has become like a presidential election -- we either credit Modi or discredit Rahul.

As it has been seen in Madhya Pradesh, Gujarat and Chhattisgarh, it is very difficult to dislodge the BJP once it comes into power in a state. Will we see this in UP as well?

UP is a complex state. It is a difficult to maintain and sustain social balance in UP.

The first test will be who they (the BJP) make CM.

Secondly, if they waive off farmers' debt which was a poll promise.

This will decide the future of their politics.

Mayawati has been able to hold on to the 20% of her core vote base in UP, but what is the point of maintaining this base if it cannot translate into electoral gains?

The function of the 'core vote' is that it works as the 'base vote' to which other votes can be added upon.

That makes a winning alliance, but when no other votes get added on to it, then it does not translate into electoral gains.

You had told me in an earlier interview that Mayawati would be destroyed politically if she lost two elections in a row -- where does she go from here?

There is no second rung of leadership. They have experienced the trappings of power.

They have to once again win the trust in the people -- but who will do that?

That is a difficult task and if that doesn't happen, the Dalits will shift in great numbers towards the BJP.

Is she capable of reinventing herself?

She is capable, but it has to be seen how much hard work she can do to achieve this.

She has a sharp mind, is intelligent, and is receptive to her community.

She did not do any work in the last four years (after she became a Rajya Sabha MP). She had no direct connect with the people because she lived in Delhi.

When she came to UP, she met the leaders and returned. She did not intervene in issues or taken up new causes through movements.

The BSP was basically a party of mass movements, but it stopped being so.

She only started working for the election in the last one-and-a-half years. But her Dalit-Muslim coalition backfired.

It gave the BJP the space for counter-polarisation.

She did not have the time to successfully create a Dalit-Muslim coalition because she announced it just a couple of months before the election.

What are the three things Behenji needs to do?

She needs to reinvent herself and the BSP's politics. It needs a new language.

She needs to reconnect with her own people and revive the 'movemental' character of the BSP.

She needs to build it like Kanshi Ram did. Mayawati knows how they did it because she was a part of it.

So both the SP and BSP need to go back to their basic politics?

They have to build trust within their communities.

Akhilesh speaks the modern language, he does not speak the language of caste.

He will have to reconnect with his traditional roots.

You cannot reach the marginal poor through laptops, metros and highways.

You need to engage in a politics that fulfills their basic needs.