On July 17, India will elect its next President, likely Ram Nath Kovind, the second Dalit to occupy the highest office in the land.
'The BJP,' says former Dalit IPS officer S R Darapuri, 'will never do anything substantial to empower Dalits' 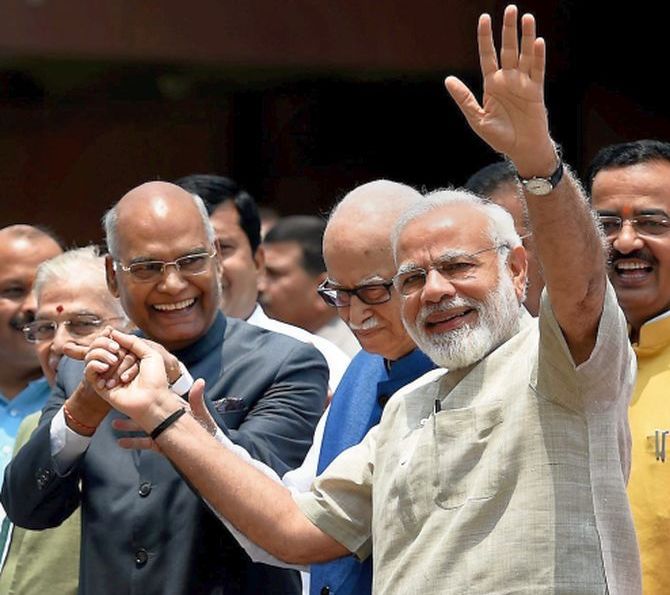 S R Darapuri, a retired Indian Police Service officer who formed a political party -- the All India People's Front -- was arrested in Lucknow recently for protesting against the Yogi Adityanath government over 'atrocities against Dalits' in Uttar Pradesh.

He has now dissolved his party into the Yogendra Yadav-led Swaraj Abhiyan.

Darapuri spoke to Rediff.com's Syed Firdaus Ashraf about the condition of Dalits in UP under the Adityanath government which recently completed 100 days in power.

Why were you demonstrating against Chief Minister Adityanath's government?

We never held any demonstration. We had organised a seminar in Lucknow on 'Dalit atrocities and remedies'.

In that function, 43 Dalits were coming from Gujarat and they were to reach Lucknow on July 2. They were bringing a 125-kg soap to gift to the chief minister.

The UP police detained them in Jhansi and took them into custody.

The next day they were sent to Gujarat by train and seized the 125-kg soap.

Why were they bringing a 125-kg soap?

They wanted to gift it to Adityanath.

In Kushinagar on May 5, just before his visit, Uttar Pradesh government officials had distributed soaps to Dalits and told them to take a bath before meeting the chief minister.

To protest this act of UP government officials, the Dalits from Gujarat were bringing this huge soap to gift the CM.

They made a 125-kg soap because this year we celebrated the 125th birth anniversary of Dr Babasaheb Ambedkar.

What was the point of gifting this soap to Adityanath?

They wanted to give it to Yogiji to make his body and mind clean.

Unfortunately, they were not allowed to proceed.

Our function at the Lucknow Press Club too was cancelled.

When we were planning our next step, the police came and arrested us.

They said we were violating Section 144 of the IPC (Indian Penal Code).

I told the policemen that to hold a press conference at the press club is not illegal, but they were determined to arrest us.

They took us to the police station and kept us there for five hours.

The message the government wanted to give by our arrest was that they will not tolerate any dissent or protest against them.

Many Dalits support the Bharatiya Janata Party.
The Adityanath government must have felt that your protest might take away their support, and therefore the arrest?

All Dalits are not with the BJP.

Ever since the BJP has come to power in UP, the atrocities against Dalits have increased manifold.

In Saharanpur, 56 Dalit houses were burnt and 25 people were seriously injured.

No action was taken against the perpetrators. Rather, the Dalits were arrested.

Members of the Bhim Army clashed with the police and 35 of them were sent to jail.

So, the BJP has got Dalit votes for sure, but they are not doing anything for the protection or welfare of the community.

BJP President Amit Shah eats regularly at Dalit homes.
The BJP has put up a Dalit, Ram Nath Kovind, as its Presidential nominee.
So how can you say that the BJP is not doing anything for Dalits?

It is a gimmick.

Eating at Dalit homes does not solve their problems. It is just deceiving them.

Many other politicians have done similar gimmicks, but it has not benefited the Dalits in any way.

The BJP is using Kovind only as a symbol and they will never do anything substantial to empower or to benefit the Dalits.

What do you think the BJP is doing against the Dalits in UP?

In all BJP-ruled states in the country, atrocities against Dalits are increasing. And no action is being taken against the perpetrators of such crimes.

Secondly, the land problem is huge for Dalits.

As per the socio-economic census of 2011, 73 per cent of Dalits are landless and they are manual labourers.

The BJP has not come out with any plan to tackle this.

Why is the BJP getting support from the Dalits?

One reason is that they are disillusioned with Dalit politicians who have only used them as a vote bank.

They did not address any of the problems of the Dalits.

They swayed the discontented Dalits in the name of Hindutva, because a majority of Dalits follow Hinduism.

They have taken many from the community ignored by the Dalit political parties under the Hindutva umbrella.

Those segments have moved towards the BJP. They felt that the BJP will do something for their upliftment.

You have also highlighted the plight of police officers like Charu Nigam. Recently, we had the case of Shreshta Thakur who was transferred allegedly for sending a few BJP members to jail.
Is the police under political pressure in UP?

The police has been shackled by every government.

Every party in power misuses the police.

They exploit the police and also make them a scapegoat.

How do you rate 100 days of the Adityanath government?

The government has failed on all fronts.

There has been sharp increase in crime.

There is total lawlessness in Uttar Pradesh and there is a lot of symbolism.

The BJP government is scuttling the fundamental rights of citizens with issues like anti-Romeo squads, love jihad and gau raksha.

They have created fear among the Dalits, minorities and even some right-wing thinkers.

There is a lot of insecurity among the people of UP because of the actions of these vigilante groups.

Yes. There is lot of political tension and unfortunately the minorities are under great threat.

They are demoralised because vigilante groups, along with the government machinery, are frightening them.

The minorities at the moment are not in a position to fight back.

The same is the situation with the Dalits, but they are fighting back.

The minorities, however, are living in terror.