'You have to work for the development of the people; stay connected with them; be available for your voters so they can come to you for redressal of their problems and don't rely on the brand equity of the central government.' 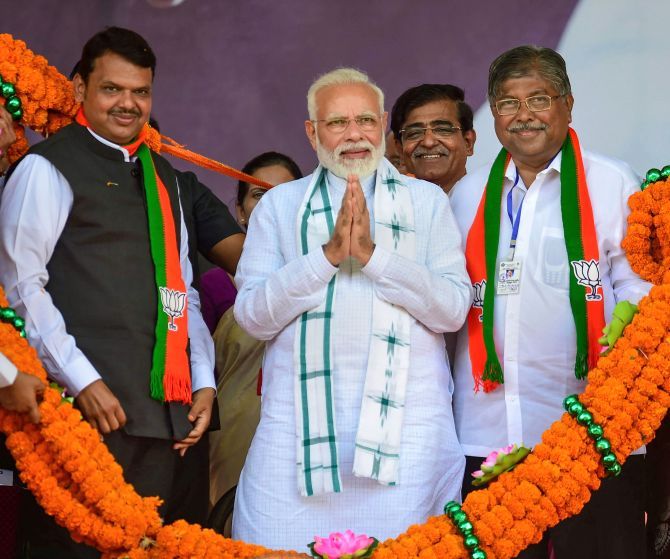 He is every pollster's envy. And why shouldn't he be? For Pradeep Gupta, the Harvard-educated founder of Axis My India, has time and again successfully cracked into the voters's mind to publish exit polls that are closest to the actual results.

When the entire polling community went to town with exaggerated figures of more than 200 seats for the Bharatiya Janata Party-Shiv Sena alliance in Maharashtra and 70 plus seats for the BJP in Haryana, Gupta's exit poll for the India Today group stuck its neck out and gave the BJP-Sena combine anywhere between 166-194 seats and 32-44 seats for the party in Haryana.

Axis My India's numbers hit the bull's eye with the BJP-Sena winning 161 seats in Maharashtra and the BJP getting 40 seats in Haryana.

"People this time wanted to vote for whoever was in a position to defeat the BJP in Maharashtra. The voting percentage in this assembly election also reduced from 71% in the last election to 65% this time. This 6% drop in the votes polled is also responsible for the BJP's relatively poor showing this time," Gupta tells Rediff.com's Prasanna D Zore.

What is it that you do differently/better from other exit poll agencies that helps you predict accurate results?

I can't comment on what the others do, but we invest a lot in people and resources.

One of the key factors we focus on is our recruitment and selection process, particularly using robust research, training and modelling session.

We put lots of efforts and resources in these key processes.

What are the challenges you face as a pollster?

When we talk about an election in India, we have to understand who the voter is.

If we talk about all-India phenomena then 70% of the people we poll are in rural areas and the rest in urban (areas).

The definition of rural and urban is different for different purposes.

From an election point of view, generally, there is 65% to 66% voting across India and for getting the math right, we have to interview more of rural and poor voters and then connect the dots by interpreting their voting pattern.

If you are able to sincerely connect with these voters then you stand a real chance of getting a serious and sincere response from them.

Most of our training evolves and revolves around these processes.

Your contention is if you connect properly with the poor and rural voters, there are higher chances of getting the numbers right.

Yes, that is right. We have to get our representative sampling right.

When I say representative sampling, it is across different demographies and geographies.

As per the people who you spoke with for the exit polls in Maharashtra and Haryana, what were the factors affecting the BJP's performance? The BJP declred it would get 75-plus seats in Haryana and 225-plus in Maharashtra based on its performance in the Lok Sabha poll.

That is something they (the BJP) were aiming for and these predictions were based upon the given political situation and issues in the country.

After their landslide victory in the general election, they thought that all the positives for them like the abrogation of Article 370 would work in their favour.

Generally, after the Lok Sabha election, this positive factor in favour of the ruling party continues unless some negatives affect them during the intervening period between the general and assembly election.

What went wrong with the BJP's calculation?

I would not say that something went wrong, but they did not address local issues (affecting the people in these two states).

While electing the local or the state government, the hopes and expectations of electors are different.

Also, human nature is such that after winning an election, anti-incumbency starts building up.

Look at what happened during the state elections in Chhattisgarh, Rajasthan and Madhya Pradesh in December (2018) and the general election in May 2019.

In these three states, the Congress formed the government but lost very badly in the Lok Sabha election.

How many Lok Sabha seats did the Congress win in these three states? Zero out of 25 in Rajasthan; and one seat each in Chhattisgarh and Madhya Pradesh.

In these three states, anti-incumbency settled in favour of the Congress (during the assembly elections).

If the BJP had addressed local issues, would its performance have improved in Maharashtra and Haryana?

Definitely. Both these states had BJP governments fighting anti-incumbency from the day they took power in 2014.

When you go out to the people asking for votes, you are getting into an agreement with them. You make promises to them and based on those promises they vote for you.

Once they realise their aspirations and your promises are not being fulfilled to the extent of their expectation then it results in anti-incumbency.

Likewise, there is pro-incumbency if you fulfil your election promises. Pro-incumbency has been witnessed in Odisha.

But then if it goes against you, the voter waits for the right time and that right time comes when people go out to cast their ballot.

Would the BJP's tally have been better in both states had it focused on local issues?

Yes. Whenever people re-elect a government, it is out of pro-incumbency. And such a pro-incumbency vote helps you increase your previous tally at least, if not give you a landslide.

What factors worked in favour of the Congress in Haryana and the NCP in Maharashtra? In Haryana, yet again a new political party, the JJP, took centrestage with 10 MLAs.

In Maharashtra during the last assembly election, the BJP and Shiv Sena fought separately and got 123 and 63 seats respectively, taking their combined tally to 186.

This time they fought the election as partners and the idea was to increase their tally, but that did not happen. It has come down to 161 with the BJP winning 105 and the Shiv Sena getting 56.

Had they addressed local issues well in advance and to the satisfaction of the state's electorate, the tally would have been higher.

They were hoping to cross 200. They won a landslide in the general election because people did not have an alternative (to Prime Minister Narendra Damodardas Modi then); there was no strong and reliable Opposition.

During the general election, the Opposition was seen as weak but during the assembly election, there was strong Opposition visible in the form of the NCP's Sharad Pawar in western Maharashtra.

You must have a strong captain if you have to win a match, a war or any competition.

The Congress in Maharashtra was headless (during both the Lok Sabha and assembly election).

The Congress could have done much better had it gone to the election with a strong local leader. But it could not capitalise on the anti-incumbency prevailing in other parts of Maharashtra. The NCP successfully did it in western Maharashtra.

In Haryana, what the Congress did right was to exploit the discontent against the BJP among the Jat, Dalit and the Muslim communities.

The Jats in Haryana got no benefits from the (Manohar Lal) Khattar government, unlike Maharashtra where the Devendra Fadnavis government gave reservations to the Marathas. It is a different matter that the issue is now with the Supreme Court.

In Haryana, during ticket distribution, the Jats felt ignored as the BJP gave tickets to only 20 Jat candidates. But the Congress had 30 Jats fighting on its tickets.

So, the Jat vote split between the BJP and the Congress.

Earlier, there was the Indian National Lok Dal (founded by the late Devi Lal and from which his great grandson Dushyant Chautala was ousted and formed the JJP) gunning for Jat votes.

This time the Congress secured 28% votes but got 31 seats and 2% went to the INLD.

It is the combination of the Jats, Dalits and Muslims that is decisive in 71 seats where they have over 30% votes.

That is quite a number and this factor helped the Congress come out better than the BJP.

The Jats in Haryana feel ignored by the BJP, and the Dalit and Muslim votes are skewed more towards the Congress.

Had the JJP and Congress fought in alliance, they would have secured at least 70 out of 85 seats.

Did the voters you spoke to give you a sense that the witch hunt against political rivals in Maharashtra worked against the BJP?

People this time wanted to vote for whichever contender was in a position to defeat the BJP.

The voting percentage in this assembly election also reduced compared to the last election, from 71% to 65%.

This 6% drop in votes is also responsible for the BJP's relatively poor show this time.

Did BJP voters in Maharashtra turn complacent this time assuming that the party was heading for a landslide victory, and didn't come out to vote?

Yes. Particularly the upper castes and the OBCs. That is where you have the BJP's loyal and committed voters in Maharashtra.

Did the popular sentiment among the voters in Maharashtra give you a sense that the BJP's witch hunt against Sharad Pawar tilted the scales in the NCP's favour?

As human beings, we all sympathise with our political leaders. The talks about the ED (enforcement directorate) raiding Sharad Pawar or asking him to come to its office seems to have worked in the NCP's favour.

Add the already existing anti-incumbency against the Fadnavis government and you have what you see in Maharashtra.

Were BJP voters angry with the party leadership for admitting turncoats from the Congress and the NCP, some of them tainted, and giving them tickets?

That depends from person to person. If a grassroots leader, connected with the masses and known for addressing people's issues, coming over to join your party, s/he should be welcomed if s/he carries her/his votebank.

But in some cases -- like say Udayanraje (Bhosale, who switched over to the BJP from the NCP and lost the Lok Sabha by-election from Satara), who fought the 2019 Lok Sabha election (from Satara) on an NCP ticket and resigned after three months so that he could fight the same election on a BJP ticket -- it does not work.

Another leader like Radhakrishna Vikhe Patil (former leader of the Opposition and Congress leader from Ahmednagar who joined the BJP two months before the election and won the same seat on a BJP ticket) won the election because he is a mass leader.

So, this sentiment differs from person to person.

The BJP-SS won only 161 seats, which is 5 less than the lower range of 166 and 35 seats lower than the higher range of 194 seats that Axis My India exit poll predicted. Why such a wide range?

The problem was all the parties had large number of rebel candidates who fought against their own party nominees.

There were 40 BJP and 27 Shiv Sena rebel candidates and that is the reason for our poll's wide range.

It is very difficult to identify in a very limited sample size how these rebels will fare in the election.

As many as 27 Independent candidates won the assembly election in Maharashtra. Our range could have been much narrower but for these rebels.

What are the important lessons that these two state elections have thrown at the major political parties?

You have to work for the development of the people; stay connected with them; be available for your voters so they can come to you for redressal of their problems and don't rely on the brand equity of the central government.

Delivery at the ground level must be done by the local governments and through state government machinery.

Did national issues like Article 370, retaliation against Pakistan, etc work against the BJP?

I won't say these issues worked for or against the BJP, but these are national issues which help build brand equity at the national level, but after building that brand equity, it has to be delivered on the ground level.