'Nitish Kumar has to be a junior partner of the BJP'

'BJP has achieved its aim by making him a regional leader dependent on them.' The numbers are in and the results of the Bihar election are out, with the Bharatiya Janata Party leaving its ally, the Janata Dal-United, far behind in the seat tally in the Bihar assembly election, emerging as the senior partner in the alliance for the first time in two decades.

Ambassador Pavan K Varma, a former diplomat, a former JD-U member of the Rajya Sabha and once close to Bihar Chief Minister Nitish Kumar before he was expelled from the party for speaking his mind, decodes the Bihar results for Rediff.com, and tells Syed Firdaus Ashraf that the BJP with Chirag Paswan's help has achieved its aim by making Nitish Kumar a regional leader dependent on the party.

What's your take on the NDA winning a simple majority in Bihar?

I congratulate the BJP and the NDA for retaining Bihar. As of now, it is a tenuous victory, for the Rashtriya Janata Dal performed very well.

There are some clear takeaways from Bihar. First of all, PM Modi's personal popularity remains high.

Secondly, (RJD leader) Tejashwi (Yadav) gave a spirited fight, but I think he was unable to extend his party's electoral footprint significantly beyond the Muslim-Yadav factor. The Congress party fought on 70 seats, but only won 19 seats.

What about Chirag Paswan?

In this case, there was a self-inflicted attack on the JD-U by the use of the Lok Janshakti Party, which reduced the number of JD-U seats by as many as 30.

Without Chirag Paswan playing this role, the JD-U may have emerged as the single largest party.

The unfortunate part is that Chirag Paswan, in my view, was deliberately deployed with full knowledge and blessings of the BJP leadership to downsize Nitish Kumar and to get the BJP into a dominant position in the alliance.

Chirag Paswan as a member of the NDA could not have attacked another NDA ally, which he did and he publicly abused Nitish Kumar.

At the same time, he publicly said he was the Hanuman of PM Narendra Modi. And the results are there for us to see.

The JD-U has been deliberately cut down to size (by the BJP). And we have to see now how this alliance will function and what tension will begin in these circumstances.

What does the future hold for Nitish Kumar? Will he be the junior partner of the BJP now?

Nitish Kumar has no option but be a junior partner of the BJP. You may make him chief minister, but the BJP has achieved its aim by making him a regional leader dependent on them. 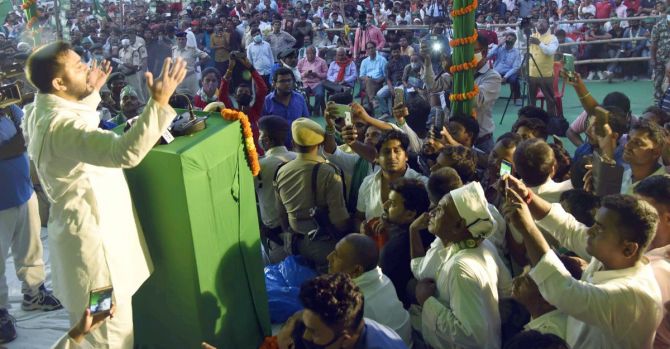 Modi's aura does not seem to be fading.

PM Modi has delivered through the direct benefit transfer undoubtedly to the common masses with greater measure than before. At the same time, some of his aura is directly related to the absence of a credible alternative.

In my view, Narendra Modi versus Rahul Gandhi is a non-starter. In the absence of a credible pan-Indian face in the Opposition, PM Modi benefits from TINA factor (There Is No Alternative).

One thought that Tejaswhi's promise of 10 lakh jobs would have helped him.

It certainly helped because the RJD performed quite well.

Unemployment is a big issue in Bihar. It is quite high in Bihar and now the NDA will be judged on such matters and economic growth.

Why did the exit polls get the results so wrong?

People were swayed by the crowds and the enthusiasm of the crowds that Tejashwi was drawing to his meetings.

Given his caste support structure that is not difficult to achieve as those crowds are vocal and enthusiastic. However, Tejashwi's crowded meetings did not convert into votes.