News
Business
Movies
Sports
Cricket
Get Ahead
Money Tips
Shopping
Sign in  |  Create a Rediffmail account
Rediff.com  » News » Bhopal: 'It was homicide not amounting to murder'

Bhopal: 'It was homicide not amounting to murder'

M R Sivaraman, a retired Indian Administrative Service officer was the finance and planning secretary of the Madhya Pradesh government when the Bhopal gas tragedy occurred on the night of December 2-3, 1984.

In this exclusive interview to Shobha Warrier, he recounts what happened on that fateful night.

"I was in the bungalow of the finance secretary when I heard a noise. I came out of the house, and it was around 12.45 am or 1 am. I could see people running here and there in panic and shouting, gas leak ho gaya.

I went to the hospital that is very close to my house around 3.30-4 am, and found a lot of people there. When I spoke to the doctors, I was told that many people had taken ill and some were frothing in the mouth and some were complaining of pain in the eyes.

More and more people started coming in with complaints. I went and asked my wife to collect blankets in case the patients needed them, and was back in the hospital. None of us, not even my children had any complaints as we stayed quite far away from the factory.

When I went back to the hospital, I found the doctors in panic as people started dying. A man might be talking in one moment but would fall dead the next moment. As I was in charge of the entire policy requirements of the government, I rushed to the main hospital, and there also, people had started dying in large numbers.

By 8 am, I rushed to the secretariat but found the place completely empty. Within a few minutes, N R Krishnan, the then secretary to the chief minister came in. The entire city was in panic but the collectors, the superintendent of police, doctors and civil surgeons were in the field carrying out their duties diligently.

Somebody had to take charge of the secretariat. The chief secretary had gone to the chief minister. So, on my own, I took a personal decision and told Krishnan that I was withdrawing Rs 1 crore from the State Bank of India. I called the State Bank and told him that I wanted Rs 1 crore in cash. Then I called 15-20 young IAS officers and told them to carry Rs 5 lakhs into various wards and distribute the money to people who were injured and suffering, and take a signature from them. I took full responsibility. The poor youngsters, including a lady IAS officer who was eight months pregnant, went around and distributed money to the needy as some had to bury people, some had to cremate their near ones, some had to buy rations, medicines, etc... There was no agitation in the city and there was peace as people got money.

I would say the city was under utter confusion in those three-four days. People were injured, people were dying, cremation and burial grounds were full. It was a chaotic. I felt at least when people had money in their hands, they would feel less insecure.

The chief minister and the finance secretary told me, you do whatever you want and the government will fully stand by you. Then, I and Krishnan took charge and we started compiling the number of people died. The next two days co-ordination took place from my room.  One officer was put in charge of the cremation, another officer went around breaking open houses that were closed. Lakshminarayan (who retired as the secretary to the government of India) who went to open the houses found people dead in locked houses; he took ill at the sight of the dead bodies.

In the hospitals, the doctors and nurses were on their feet continuously for 72 hours. They were standing without eating or drinking taking care of the ill. It was a marvellous display of commitment to a tragedy. You talk of what (New York Mayor) Rudy Guiliani did in the US after the September 11 attacks but he did nothing compared to what the doctors, nurses and the young officers did in Bhopal. There were thousands of people dying in Bhopal.

I recorded 1,400 deaths in four days. The photographs of all the dead were in my room, as also of those who were not identified. Things stabilised in four days but people were dying. A large number of people died. Maybe a few thousands died in the next one year. But people started suffering from all sorts of diseases. This has to be seen as something that resulted in prolonged illness. Unlike the September 11 tragedy in the US or a tsunami or a tidal wave, here was a grave human tragedy where people were dying slowly.

What troubled me when we started giving compensation was that those who lived far away from the factory started claiming compensation. But I and Krishnan were very strict about that.

What I can say as the number two or number three in the government is, the kind of efforts put in by the government officers, doctors was unparalleled. I have gone to several countries in the world but never seen this kind of dedication and commitment. Unfortunately, all these NGOs thrive on condemning what people have done on those days.

After a month, I told the chief minister, we must give one month's salary to all those who worked so hard but when I offered it, they refused. They said, we worked when there was a tragedy and we will not accept anything for our work. It was our duty. It was that kind of spirit with which the government servants worked that day.

Those who were talking about the tragedy later and today never spoke to me, the person who first went there. Nobody ever asked N R Krishnan. All sorts of false stories were going around. Dominque Lapiere wrote a book full of lies but never ever spoke to me. From where did all these people get the information? We were the people who were in the field.  I and Krishnan were the two officers who were in the secretariat then. One day, when I write my autobiography, I will write what exactly happened that day.

Now that the verdict is out, I feel very sad because here is a case of total negligence of the factory managers, members of the board of directors, and because of the negligence, thousands of people died and yet they got away with it. It was homicide not amounting to murder. It was criminal neglect.

Nowhere in the world would such a case take 26 years to come out with a verdict. People have died and gone. I felt extremely sad on June 7 (the day of the verdict) as I had seen people dying in front of me." 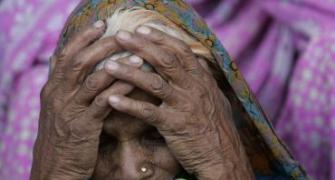