'For the last few years you are only hearing about Hindus, Muslims and casteism.' 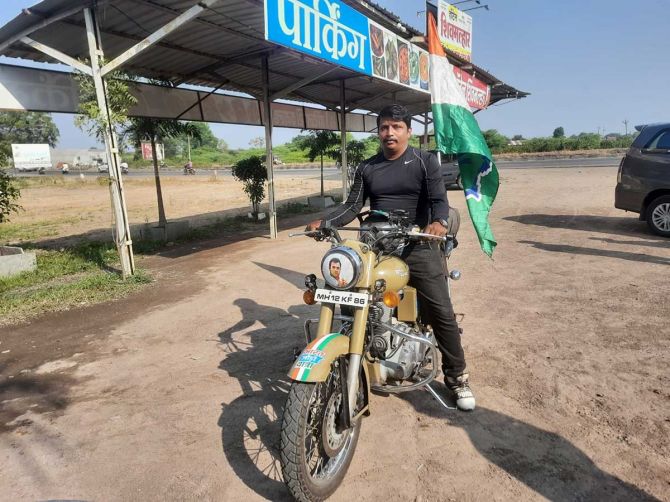 Prasanna D Zore/Rediff.com catches up with Vishal Gund, a young Punekar travelling on his Royal Enfield motorcycle to join the Bharat Jodo Yatra, which, on its 71st day, is passing through Maharashtra's Akola district on November 16.

"I am an Indian first and then a Congressi," says Vishal. "Rahul Gandhi is our leader and he is walking for all of us. As a (Congress) worker I want to support him."

"It was my dream to travel alone on my bike," Vishal says as he waits to pay the bill at a roadside dhaba. At 3 pm, he had covered half the 380 km distance between his home in Pune and Buldhana, where Rahul is scheduled to address a meeting on November 18.

"I want to rest myself as well as my bike before I proceed," he says from Nevasa, where lies the samadhi of one of India's greatest saints, Sant Dnyaneshwar.

Vishal will reach Washim on Wednesday evening and plans to accompany the yatra on his bike from Washim enroute to Shegaon in Buldhana.

Ask what Bharat Jodo means to him and why the nation needs to be united, he says, "For the last few years you are only hearing about Hindus, Muslims and casteism. Bharat Jodo to me means bringing all Indians together."