'Bengal people understand Mamata's politics. They are not fools'

'Mamata did not stand up for those who suffered owing to the chit fund scam, but only stood up for Police Commissioner Rajeev Kumar because he has all the knowledge about the chit fund case.' 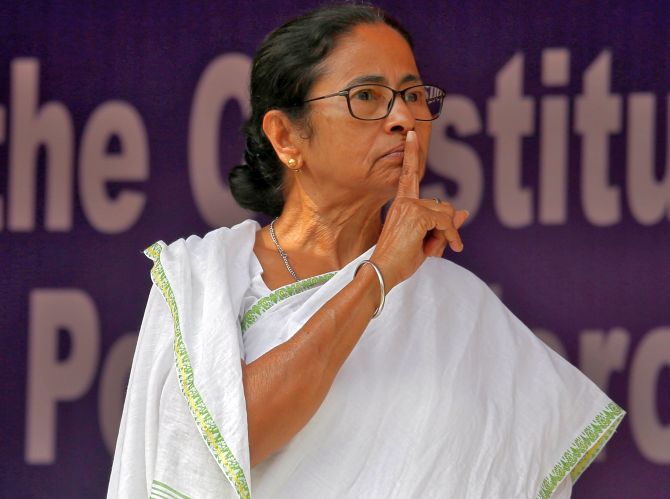 Why is West Bengal Chief Minister Mamata Banerjee at loggerheads with the Centre?

What is this chit fund scam all about?

And why did the Trinamool Congress chief go on a dharna for three days?

If these questions puzzle you, here are some answers, courtesy Dr Sujan Chakraborty, the Left Front legislative party leader in West Bengal who has organised protest rallies by the Chit Fund Sufferers's Unity Forum.

The TMC blames Bharatiya Janata Party leaders Mukul Roy and Himanta Biswas Sarma while the BJP blames TMC leaders involved in the chit fund scam. Can you give us a clear picture as to what is happening?

This is not a tussle between the Centre and state as it is being portrayed. This issue is of complete corruption and lakhs of people who have been looted and cheated in the country because of the chit fund scam.

The leadership and the administration of the ruling party in the state are identified and known in the chit scam.

Along with them other leaders from different parties too are involved like BJP leader Himanta Biswas Sarma from Assam and some people from Orissa. But the difference is that all the other states agreed to the CBI probe except West Bengal. They opposed the CBI investigation.

One wonders why the CBI did not take any action for the last five years in the chit fund scam and woke up all of a sudden.

The CBI has knowledge of many things and has arrested many people. When they started making arrests, Mamata Banerjee opposed it in different ways.

For example, when her cabinet minister Madan Mitra was arrested, they (the TMC) took out a rally (in his support). In this case concerning Police Commissioner Rajeev Kumar, she sat on a dharna.

In your opinion, why did Mamata sit on a dharna?

All documents regarding the chit fund scam have been hushed up by Rajeev Kumar. He knows many details and he even knows of the criminality and corruption of the supreme leaders of the TMC. Therefore, she is apprehensive of Rajeev Kumar's arrest.

When those who suffered in the chit fund scam were in trouble, she said what is done is done to them.

Mamata did not stand up for those who suffered owing to the chit fund scam, but only stood up for Police Commissioner Rajeev Kumar because he has all the knowledge about the chit fund case.

And to answer your earlier question of why is the CBI taking action after four years. It is because the BJP wants to use this case for political advantage. They are not sincere or serious (to recover the money of the chit fund investors).

Mukul Roy, who was with Mamata, has now gone to the BJP and is now being protected by them. Similarly, Bharati Ghosh, the ex-cop, has now joined the BJP for protection.

The BJP is using the chit fund scam as a political game.

What role has Rajeev Kumar played in this chit fund scam due to which Mamata has come out in his support?

He was the heading the SIT (Special Investigation Team) probing the chit fund scam. He was supposed to investigate it in April 2013. The CBI inquiry was ordered in May 2014.

He had a year to probe; he was instrumental in destroying or tampering evidence etc. That is why he is so important.

When the CBI targeted then Gujarat chief minister Modi, he used it as a political opportunity, saying the CBI under the central government is hurting Gujarat's asmita (pride). Is Mamata not doing the same?

Bengal people understand Mamata's politics. They are not fools.

The BJP is trying to portray that it is fighting against corruption, but that is not a true picture.

What has happened to the investors? Where are they? And what do they say?

In West Bengal, it is complete autocracy. The media is not allowed to speak. The investors (those who lost money in the chit scam) are having programmes in every district of West Bengal and demanding payback of their invested money.

They are organised and have gone to court to recover their money, but they are poor people. They cannot come out for protests every time. Many of them are poor people and they have to earn a livelihood.

Do these poor people who have invested money in the chit funds expect their money back?

Some people feel the money is lost forever. The chief minister has not done anything for the last four, five years.

She is opposing the CBI inquiry and is also indifferent (to the investors's lost money).

The Trinamool Congress and the administration are running a police raj in Bengal.

Even if you go to lodge a police complaint, it will not be lodged.

Permissions for political meetings are not given.

When the prime minister of India comes to Bengal, whether a helipad will be allowed for him or not is being questioned.

Such is the state of affairs. These things never happened in Bengal. The political space to oppose is getting lost.