'Someone who has lost a dear one to Covid; that person is not going to forget and will not vote for the BJP.' 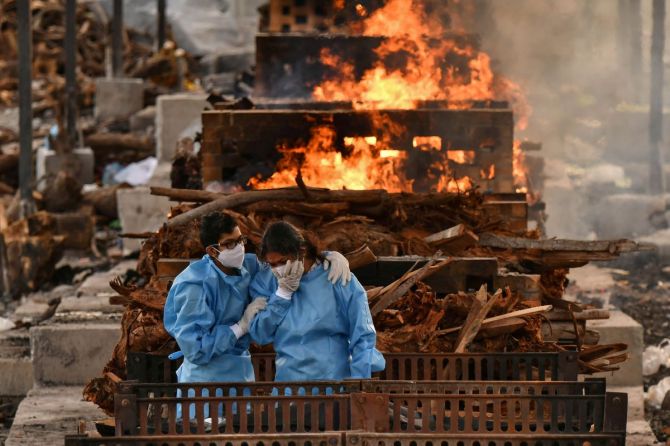 IMAGE: Family members mourn the loss of a relative at a crematorium in Giddenahalli village on the outskirts of Bengaluru. Photograph: Samuel Rajkumar/Reuters

"Victory and defeat is the reality of electoral politics, but the influence of the Sangh will ensure that the BJP remains a strong political force in times to come," says Badri Narayan, social historian and professor at the G B Pant Institute of Social Science.

The author of three books on Dalit identity and politics, his latest book Republic of Hindutva - How the Sangh is Reshaping Indian Democracy, explores the RSS's deepening influence among various communities and how it is shaping the BJP's politics.

"Hindutva politics is going to be more influential in the future. The Sangh's rath is continuously moving forward," he tells Rediff.com's Archana Masih in the concluding part of his interview.

How has the RSS gained in strength under the BJP government?
How has it changed in the last 7 years?

The RSS has maintained that they have been at a loss whenever a BJP government has been in power because their cadres become power-centered. This is the RSS' self criticism of its own self.

But having a BJP government has made the image of the RSS more powerful. The BJP's core strength comes from the Sangh.

It has brought them media support and support from a wider section of society which they did not have in the past.

The NGOs and allied organisations run by the Sangh have got a boost. As a result, their ideology has found a larger canvas and wider reach.

The BJP used the Ganga as mobilisation politics.

Yes, the point I was making is that the BJP uses a lot of creative measures for mobilisation politics. They are very adept at using cultural symbols for their politics.

What impact will the graves and cremations along the banks and in the river have on the UP election next year?

The coronavirus has disturbed the BJP's politics. It has made BJP's politics defensive. The election is still some time away and they have started working on the recovery of their image and their losses.

Yet there are some losses that cannot be recovered, like someone who has lost a dear one to Covid. That person is not going to forget and will not vote for them.

The question is whether the Opposition can use this to its advantage and stand up against the BJP? The Opposition is exposing the BJP's failures and fanning people's anger, but can they translate this into votes at the polling booth?

I think the Opposition needs much more ground mobilisation if it wants to preserve people's anger till UP election time which is still 6-8 months away. 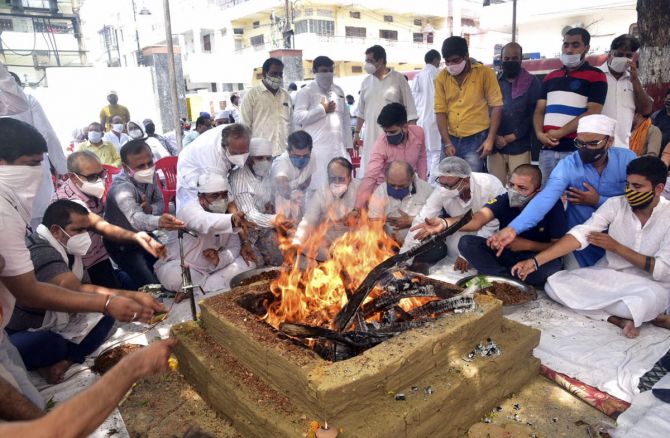 IMAGE: A mahayagya to pray for those who succumbed to COVID-19 in Varanasi, June 6, 2021. Photograph: PTI Photo

What is the future of Hindutva politics?
What are 5the new policies, programmes one can expect and in what ways is this going to change India?

Hindutva politics is expanding its reach. It is going to be more influential in the future. Hindutva consciousness, which is negotiated and moderated by the Sangh, will grow.

If they include more and more diverse groups within their fold they will not leave any space for the rest. The Sangh's rath is continuously moving forward.

How will it manifest in the BJP's politics?

If politics is interesting, it is also unpredictable. Kerala has a very strong presence of the Sangh, yet during elections the same people who work for the Sangh or support it, vote for the UDF or LDF.

Victory and defeat is the reality of electoral politics, but the influence of the Sangh will ensure that the BJP remains a strong political force in times to come.

Hindutva is going to remain a dominant force and will shape the debate of Indian politics.

Can any political party in India survive without appealing to the Hindu majority?

No. Political parties have to make their presence strong among the Hindu majority and that is one of the big successes of Hindutva organisations.

They have created a confederation which has made Muslim minorities irrelevant in many places and this has been proved in the past elections. You write that the RSS and Modi are building social capital which may form a new republic and a long-term relationship with the people? What shape and form will this new republic take?

The new republic will be shaped by the nuance and echo of Hindutva. What I mean by social capital is that the Sangh has deepened its influence in various communities and on people's psyche.

Hindutva consciousness has crept into the social structure and entered the mindset.

In Gandhi's time, politics and social issues were linked together. The RSS has impressed upon the BJP to include social issues into its politics -- hence Namami Ganga, environment, Swacch Bharat etc.

They are constantly setting an agenda for their supporters. They use these political symbols to their advantage because it appeals to the Hindu consciousness.

What are the greatest concerns that the RSS has of the India of today?

Their broader idea of Akhand Bharat can only take shape when they assimilate all sections of the country.

Mohan Bhagwat said that Akhand Bharat cannot be a reality without the Muslims and the Sangh will reach out to them and would want Muslims to connect with them.

On the ground level, they would want to remove the existing inequalities and empower the marginal communities. They have co-opted the tasks that were undertaken by Leftist and Centrists forces in the past and are appropriating the agendas of various opposite groups.

A point in case is working with tribals, Dalits and marginals and helping them to build their capacity.