'Too much importance shouldn't be given to BJP's Assam win' 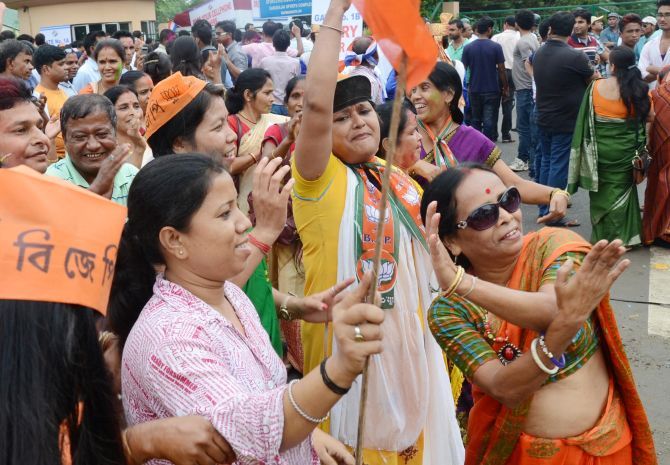 Tripura Chief Minister Manik Sarkar, a veteran Communist Party of India-Marxist leader, spoke to Indrani Roy/Rediff.com about the Left Front's dismal performance in West Bengal and what the BJP's win in Assam means for the north-east.

What are your thoughts on the Left Front's debacle in Bengal?

It is unfair for me to comment on the setback in Bengal.

I belong to a neighbouring state and, therefore, I leave it to the leaders of that state to analyse the election results.

We have efficient people at the helm in West Bengal. They will dissect the results and plan the future course of action.

For us, the Leftists, politics is all about a relentless struggle.

We win some and lose some. But we keep walking.

We will hold meetings at the state and central levels and try to ascertain the cause of this defeat.

Is it the end of the road for the Left in Bengal?

In politics, a win or a loss is just part of the growing process. When we win, we consolidate our positions.

When we lose, we learn from our mistakes and try to improve.

Politics has no room for frustration or disappointment. It's a continuous process.

What's your view on the Bharatiya Janata Party's success in Assam?

We should look at the BJP's win in Assam from a different perspective. In Assam, the BJP got the anti-Congress votes.

People there were looking for change at any cost. They were desperate to oust the Congress government.

Will the BJP's rise in Assam sow the seeds of communalism in the north-east?

It's too early to say anything. The results are just out. We still have a long way to go.

Besides, the BJP is ruling at the Centre.

Therefore, if that party tastes some success in one particular state, too much importance should not be given to it.

We should let the dust settle and see how the political equation unfolds in Assam.