'Article 370 does not make a difference one way or other'

'You haven’t heard a peep out of Kashmir so what is going to erupt? What repercussion will be (there) in long term, you will have to (wait) and see' 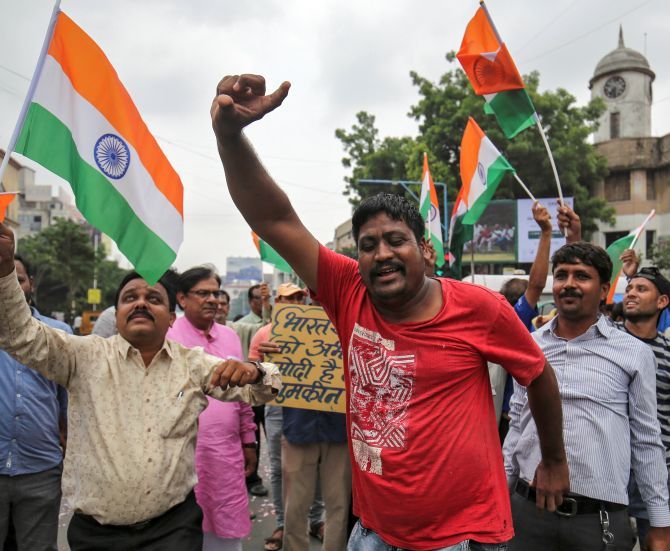 Amarjit Singh Dulat served as head of R&AW (Research and Analysis Wing) during Prime Minister A B Vajpayee’s time from 2000-2004 and is one of the key advocates of peace between India and Pakistan, especially over Jammu and Kashmir.

He has co-authored a book, The Spy Chronicles: RAW, ISI and the Illusion of Peace, with Lt Gen Asad Durrani, former head of Pakistan's Inter Service Intelligence.

For the last decade Dulat has been advocating peace between India and Pakistan and has always maintained that talks are the only way to go forward and solve the J&K issue.

After  Home Minister Amit Shah tabled the bill to scrap Article 370 in Parliament on Monday, Dulat spoke to Rediff.com's Syed Firdaus Ashraf on the issue.

Your reaction to the scrapping of Article 370?

This is in Parliament now, so what can I say?

If you see, Article 370 had nothing in it. It was only a fig leaf and it does not make a difference one way or the other.

If the government now feels right to scrap both Article 370 and Article 35A, then let Parliament decide it. What can one say on this?

But a lot of people fear that Kashmir will erupt after scrapping of Article 370 and that it is a dangerous move for peace.

Where is the question of eruption? Everything is shut down and everything is under control. The Army is there, CRPF is there and local police is there.

You haven’t heard a peep out of Kashmir so what is going to erupt? What repercussion will be (there) in long term, you will have to (wait) and see.

As of today I don’t expect any repercussion but in the long term one will have to wait and see.

What happens to the peace process now as Kashmir was always considered an issue among India, Pakistan and the Kashmiri people?

There are no talks happening with Pakistan so there is no issue. Nobody talks.

But the question is, since the issue is in Parliament and Parliament will decide. It is not (good) to comment.

As far as I am concerned I can only say Article 370 is only a fig leaf.

Do you feel Kashmiris will feel cheated after Article 370 has been scrapped as it was a special provision in Indian Constitution which many Kashmiri politicians advocated?

So let these Kashmiri politicians speak about this in Indian Parliament.

If Vajpayeeji was alive what would he say about the scrapping of Article 370?

Nobody spoke of scrapping of Article 370 during Vajpayeeji’s time.

Some people from the Rashtriya Swayamsevak Sangh and his party men used to say that about scrapping Article 370 but his government never spoke about it. And this matter never arose during his time.

(Interrupts) You see, times have changed. And now it their (BJP's) agenda to scrap Articles 370 and 35A.

They had their election agenda. So let them decide in Parliament. When the BJP put this agenda (in their manifesto) nobody objected to it.

That's because nobody thought that it will really happen, though.

(Laughs) It was always there at the back of their mind. Now the Ram temple issue is also there. This issue too was there. They had to stick to their agenda.

But what do you think? Is scrapping Article 370 good for India?

I cannot comment on that. If the government thinks scrapping of Article 370 is good for the country toh theek hai (then it is okay).

Parliament is the highest body to decide, who am I to comment?

Article 370 was considered a bridge between India and the Kashmiri people and now that link is broken.

There are other fears too in Kashmir and not just Article 35A or Article 370. Let us see what happens.