''Anybody who speaks up, anybody who reports something that the government feels uncomfortable with, or comments on anything could be charged with criminal cases, could be summoned to police stations, slapped around or grilled for several hours. This has become a new norm.' 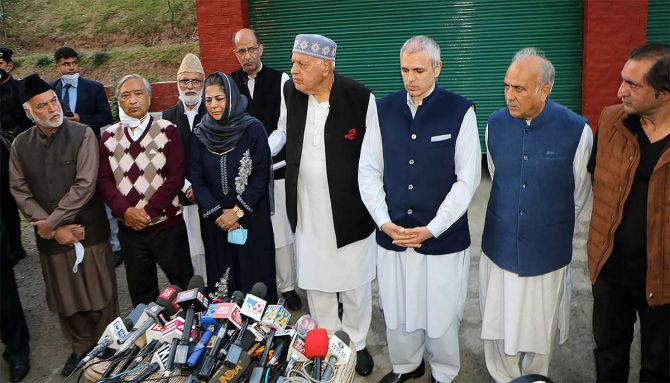 Anuradha Bhasin, executive editor of the Kashmir Times newspaper, was the first person to approach the Supreme Court last year over the abrogation of Article 370.

A fearless voice from the Kashmir valley, Bhasin has been raising her voice against the Narendra Damodardas Modi government's attempt to suppress freedom of the media in Jammu and Kashmir.

The Union government, which now administers the Union territory, has reacted, evicting Bhasin from her home in Jammu and her office in Srinagar for no apparent reason or justification.

"Politicians go by their own petty interest sometimes, whereas media professionals, who adhere to ethics and the values and basic principles of journalism, would stick to only two things," Bhasin tells Prasanna D Zore/Rediff.com.

"One is speaking truth to power and speaking for the masses that are marginalised and oppressed. That becomes a graver threat for the government and they want to rein in the narrative by completely suppressing and silencing the media."

"If you muzzle the press then you cannot have other voices being heard; then then it's only one narrative that will come to you," says the veteran Kashmiri journalist.

Why have you been evicted from your office in Srinagar and from your home in Jammu by the Union administration?

Now, both things (eviction from home first and then from the office) have happened at the same time and the pattern is extremely similar; no due process is being followed, as per the Estate Act rules, which say that, you have to give a proper cancellation notice, ensure that the occupant has received it, and then even publish it in different newspapers and things like that.

They have to give valid reasons or whatever reasons (for eviction), give time for the occupant to respond, and then send an eviction order.

In neither of the two places this process was followed.

Two-three weeks ago, I was evicted from my flat in Jammu; just a few days before that I heard rumours about (my eviction from Jammu home) and saw some things being circulated, some cancellation order being circulated on WhatsApp.

Immediately as we saw that we responded in writing to the state department, and the same day they (the Union territory government authorities) broke our locks and pushed in new allottees and gave them all my belongings as well.

Similarly here (at Kashmir Enclave), they've just come out of the blue and the (locked the) door; we've been hearing these rumors as well, and we had been asking them if this is so, then share the order with us.

But there was no response at the higher level. So we went to the deputy commissioner's court, and petitioned the court.

Now, the hearings have happened, but the order has been reserved; every day they say tomorrow, tomorrow (they will release the order), but it is almost a week now but we haven't received any order (giving reasons for our eviction)

Why do you think the Modi government is doing this to you?

For a couple of reasons.

I went to the Supreme Court last year (against the Union government's order abolishing Article 370 for Jammu and Kashmir). So the targeting actually began right then.

The very day I moved the Supreme Court and since then the state government stopped giving ads to us (Kashmir Times).

They did give us some ads in August (2019), then three more in September, and then by October, they were completely stopped.

So since October 2019, we have got zero government ads.

This is part of the larger landscape of how media is being handled and intimidated in Jammu and Kashmir.

Anybody who speaks up, anybody who reports something that the government feels uncomfortable with, or comments on anything could be charged with criminal cases, could be summoned to police stations, slapped around or grilled for several hours. This has become a new norm.

On one hand we have the Union government trying to muzzle the freedom of press in Jammu and Kashmir and on the other they have released major political detainees from the National Conference and People's Democratic Party.
What is the intention of the Modi government in being so contradictory?

Nobody knows what their intentions are, but they want to control voices (of Kashmiri people, press and political leaders).

So, even as they release these political leaders there is very little being said. I mean, gradually nowadays, the politicians are talking about (bringing back the abrogated) Article 370, which in itself took them a long time to talk about it.

Whereas politics in Kashmir has always been controlled by New Delhi, to some extent, right from the 1950s, but the media in Kashmir on the other hand, has been much free.

In the last few years, particularly the new generation of journalists, we've seen a mushrooming growth of talented journalists coming into the field; journalists who are politically aware and politically well read.

There was an increasingly growing, vibrant, media. And that becomes a huge challenge for the government.

Politicians, on the other hand, also go by their own petty interest sometimes, whereas media professionals, who adhere to ethics and the values and basic principles of journalism, would stick to only two things.

One is speaking truth to power and speaking for the masses that are marginalised and oppressed. That becomes a graver threat for the government and they want to rein in the narrative by completely suppressing and silencing the media.

If you muzzle the press then you cannot have other voices being heard; then then it's only one narrative that will come to you.

What is the situation in the valley after the release of leaders like Farooq Abdullah and Omar Abdullah from the National Conference and Mehbooba Mufti from the People's Democratic Party a few days ago?

Nothing much seems to have changed at the ground level.

Even before the political changes (abrogation of Article 370) were made last year, these leaders (Mehbooba Mufti of the PDP) had been discredited at the ground level given how unceremoniously the Union government made the government (of Mehbooba Mufti's PDP which was in alliance with the BJP) fall.

But among the people (of Jammu and Kashmir), I think they (the Mufti government) had already lost the credibility.

If you recall, in 2014 (assembly elections to the state of Jammu & Kashmir), there was massive voter turnout. And why did it reduce to just two or three per cent, when they had these Parliamentary elections or the bypolls?

Because people (of Kashmir) were unwilling to come out to vote because there was massive anger that politicians, not only because they had not delivered on the ground on their promises of basic needs of the people, but also more so because in the last election that happened (in 2014), the PDP had sought votes in the name of keeping Hindutva out. And then they got into an alliance with the same party (the BJP).

So, both parties -- the National Conference had also at one point in time had entered into an alliance with the BJP -- during their respective rule never really talked about human rights violations.

It was only when they were in the Opposition that they would talk about human rights violations, which is something that is very deeply connected to people's aspirations and their issues.

Even during their respective tenures (when Omar Abdullah and Mehbooba Mufti were the chief ministers) young (Kashmiri) boys were being arrested and detained under the Public Safety Act. So that disenchantment continues till date.

Do you foresee elections happening in Kashmir now with the release of these three important political leaders from the PDP and NC?

What this BJP government says and what it does often do not match, at least when it comes to Kashmir.

The way they have moved (by releasing Omar Abdullah and Mehbooba Mufti) is also something very unpredictable. But it's a possibility that elections can be held (in Jammu & Kashmir).

And in the given scenario, I don't see much enthusiasm in the local population with respect to election, which they consider as a complete non-issue right now.

Because it's (Kashmir) an extremely militarised area, and you know how the whole voting pattern can be manipulated.

I'm also watching and curious as a political observer, I'm watching things. It's interesting how they've gradually released them.

Now, there's no clamp down on them for talking about Article 370. However, suddenly, the BJP is getting energised and talking about it because they are going to oppose it (reinstatement of Article 370 demanded by the PDP, NC and other political parties in the region).

It is the Jammu unit of the BJP that is talking about not allowing (participation of) anybody (any political party) opposing (abolition of) Article 370.

They will talk about the Gupkar Declaration and these leaders getting their orders from across the border and all that.

These are things which might click with the Hindu population (in Jammu) where the BJP has lost its credibility because of the changes that happened last year.

Ever since August 5 last year, they have begun realising that they are going to lose their job, their land, and their businesses.

There has been a lot of resentment at the local level against the BJP. So they probably will hope to capitalise on that by opposing (the Gupkar Declaration).

And since Jammu politics, in the last 70 years, has been a counter to the Kashmiri narrative, we will see it's continuation in the days to come.

Will it work? Will it not work? These questions are there in my mind.