'It is not the vigilantes who worship the cow, but the people who rear them.'
'These cow vigilantes would not even have touched a cow in their lives.'
'They are rowdy elements, paid mercenaries...' 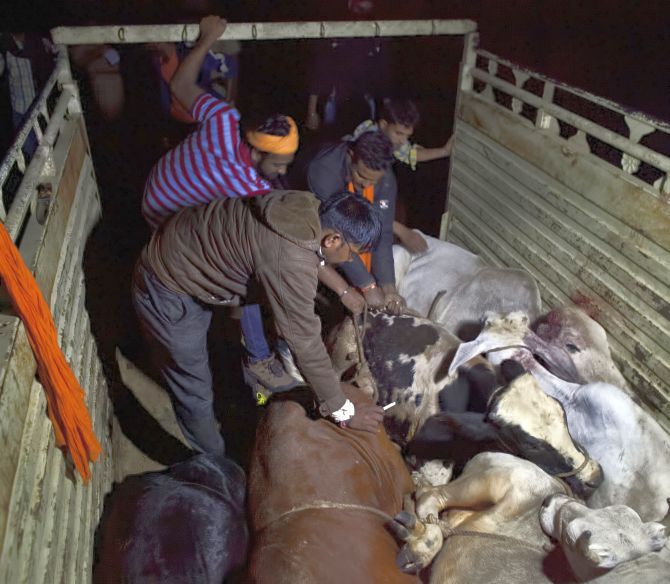 A few days ago, 25 IAS officers from the 1968 batch wrote a scathing letter to Rajasthan Chief Minister Vasundhara Raje for not taking any action against the lynching of Pehlu Khan.

The letter had some effect. Twenty-three days after 55-year-old dairy farmer Pehlu Khan died after being attacked by cow vigilantes in Alwar, Rajasthan, Raje -- who previously ignored commenting on the lynching, tweeting her condolences on the terrorism in Sweden instead! -- finally stirred and said such incidents would not be tolerated in her state.

Bureaucrat turned activist M G Devasahayam was also a signatory of the letter. He tells Rediff.com's Shobha Warrier why the Batch of 68 took up the issue.

Were you and other former IAS officers so disturbed by Pehlu Khan's lynching that you sent a very strong letter condemning the incident to the Rajasthan chief minister?

We belong to the 1968 batch of the Indian Administrative Service. There are around 100 of us.

In the academy, we had an excellent friendship network. We joined the IAS almost 50 years ago and all of us are around 70 years old now.

Recently, we formed a group. Some 75 of us continuously interact on various issues that are happening in the country.

We were discussing among ourselves the kind of intolerance that is occurring now.

It was worrying that not only the lower strata of society, but educated and intelligent people are also getting polarised ever since this dispensation came to power.

The Rajasthan incident became a flashpoint when the state government did not take any action at all even three weeks after this cruel incident.

All that happened was filing an FIR against the victim, the man who was lynched and killed.

The trigger came from Aruna Roy who has been working extensively in Rajasthan. She initiated the process of writing a letter to the chief minister.

We felt we could not remain silent and had to do something. 25 of us signed the letter and decided to make it an issue before such incidents spread all over the country.

I am happy to say that the letter had a very good impact because it was given wide publicity by the local and national media.

There was a ruckus in the Rajasthan assembly and the chief minister had to make a statement.

The allegation was that they were cattle smugglers. So what? What right do these ruffians have to lynch a human being?

The so-called cow vigilantes are extremely powerful and active in the northern part of India now and killing human beings mercilessly.

Where will this kind of anarchy lead to?

Actually, the RSS and the BJP are enjoying what is happening in the country because they are getting more popularity and more votes.

Does that mean the average Indian supports this kind of action?

It means polarisation is taking place in a big way.

Somehow, they are projecting all Muslims as demons. Even highly educated people including those in our circle, former IAS and IPS officers, are falling into this trap.

Not only the lower strata, the middle and upper strata also believe the propaganda unleashed by the RSS and the BJP.

Is this not what is happening all over the world? Anger on the Right is gaining ground because of Islamic fundamentalism.

Islamic fundamentalism is there only in a limited extent. There is a historical background behind Islamic terrorism.

Islam is not a barbarian religion; it is the interpreters who make it look like that.

The reason for all this is the Gulf countries getting money without doing any hard work.

They found oil beneath them and the American companies came, dug it out and gave them money!

If you look at the Muslim countries, they did not enjoy any amount of democracy at any point of time; barring a very few, it was dictatorship, monarchy or autocracy.

It is not like that in India, but these people take advantage of the world scenario and put the majority under a siege mentality.

Take the case of UP. The ratio is 80:20 with Hindus constituting 80%. Still, they were given the idea that they were under threat from this 20%.

They are using Kashmiri Muslims to polarise the whole of India, projecting them as barbarians. Kashmiris are demonised.

In another 2, 3 years, they will capture the whole country.

They have created a kind of siege mentality in the minds of Hindus.

How can the minority be a threat to the majority?

Do you feel cows have become more important than human beings?

This is all bakwas! See, it is not the vigilantes who worship the cow, but the people who rear them.

These cow vigilantes would not even have touched a cow in their lives.

They are rowdy elements and have been paid to do this work; paid mercenaries.

A true cow lover will not lynch a man.

Let me tell you about the two agenda they have.

Look at the way they are imposing Hindi blatantly.

With Hindutva and Hinditva, they can be in power forever as you are polarising the country through these two agendas.

Do you feel bureaucrats and the police have become pawns in the hands of the political class?

You are absolutely right. That is the main reason we got upset and wrote the stinging letter.

There is a serious erosion of calibre and integrity among the cadre of IAS, IPS, etc over the years.

They are not lean like us. We only had enough salary to subsist, but today, they get fat salaries with lots of power.

So, the fire has gone out of them.

Recently, a young sub collector stood up against the land mafia in Munnar. What he got in return was abuse from the politician. He was called mentally unstable.
Don't you think senior bureaucrats and former IAS officers should have supported him for his courage?

Yes, there are exceptions. The momentum has started and we will definitely take up his case and support him.

What is happening today is there is a nexus between the police and the politician, and the IAS officers are increasingly finding it difficult.

Over time, the police powers have been taken away from them. The kind of control we had over the police, is not there today.

Will it be a lonely fight for such upright, young officers who show courage and stand up against the corrupt system?

Yes. It is a lonely battle because the senior fellows are fat and cowards.

Even among the retired officers, those who get fat government and private pensions are not interested in the affairs of the country.

More than 90% of them have no moral courage to take a stand; they are not even bothered.

The attitude is as long as I and my family are taken care of, it's fine.

People like us, Aruna and all, we have nothing to lose. That is why we take bold stands.

IMAGE: Members of a cow vigilante group unload cows at a rescue shelter from a truck that they had chased down in Rajasthan. Photograph: Allison Joyce/Getty Images