'The government and the court have to interfere and stop both fireworks and elephants at festivals.' 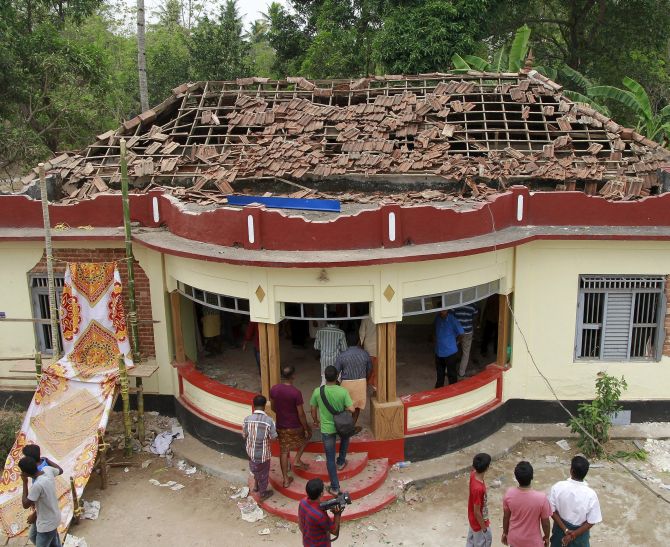 IMAGE: People at the damaged section of the Puttingal temple in Kollam, Kerala after the fire, April 10, 2016, was extinguished. A huge fire swept through the temple, killing over 100 people. Photograph: Sivaram V/Reuters

V S Jayakumar is the Secretary of the Travancore Devaswom Board and a former executive officer at the Sabarimala shrine.

His brother V S Sivakumar is Kerala's health and Dewasom minister. Most temples in Kerala are managed by Dewasoms, and the Travancore Dewasom Board is perhaps the most influential.

In this exclusive interview, Jayakumar tells Shobha Warrier/Rediff.com about Sunday morning's horrific tragedy at the Puttingal temple near Kollam, Kerala, which claimed over a hundred lives.

What precautions must a temple in Kerala follow if it plans to organise fireworks of large proportions?

It is very rare that temples have fireworks competition as part of a temple festival. What it means is there are more than one or two people in the competition and they burst fireworkers one after another like in any other competition.

Even if it is a competition, it is the duty of the temple authorities to follow all the safety norms strictly.

For this, they have to have the permission of the district authorities beforehand. Only after that, can they even store the explosives.

After the temple puts forward an application asking for permission, the district collector would order an inspection. Only after that would s/he issue a license.

If s/he finds the place unsafe, s/he would reject the application.

Did this temple have the permission to organise such huge fireworks?

What I understand is the district collector had rejected the application. That means the temple had organised the fireworks without permission.

This temple does not come under the Travancore Devaswom Board. We do not have an office in the temple premises, as it is a privately run temple.

If it is a privately run temple, won't the Devswom Board oversee what is happening in such temples?

There are 1,250 temples under the administration of the Devaswom Board. We can only look after the management of these temples.

Other than the 1,250 temples that are under the Board, there are many temples in Kerala run by individuals or trusts.

The Devaswom Board cannot directly get involved in the functioning of privately run temples. But if we see mismanagement, we have the authority to take them over.

Does that mean when something like this happens, the Devaswom Board can take over the temple, citing mismanagement?

We can only take over a temple when there is mismanagement in the functioning. This is different.

What has happened is the temple organised something without getting proper permission from the district administration or the government.

Here, only the government can take legal action against the temple authorities.

Usually in temples, a committee will be formed to oversee temple festivals, especially fireworks.

Who is responsible for this lapse -- the temple authorities or those who conducted the fireworks competition?

I will hold the temple authorities more responsible because they are the people who submit the application for permission.

The district authorities give licenses or permission to the temple and not to the person who is organising the fireworks.

In this case, they have not got a proper license to hold fireworks of such magnitude.

Do you see corruption in this action? Or is it lack of proper knowledge or just negligence?

I will not say they didn't have proper knowledge as they had given an application to the district administration for a license.

If they have gone ahead even after getting a letter that the application had been rejected and that it was illegal to organise fireworks, I would say they didn't care about rules and regulations.

What kind of punishment will they get for this action?

Only the government can take only legal action. The Devaswom Board can only see to it that the next time when they organise something, these people are not included in it.

Other than that, we cannot have any direct involvement in the temple.

Is it safe to have fireworks in a place where many thousands of people assemble? Should Kerala think twice about this tradition?

The time has come to think about such rituals that are followed in the name of tradition.

It is not about one temple, but about many temples that follow this. This has to be stopped in all the temples in Kerala.

You cannot deny permission to one temple and allow it in another, which leads to the feeling that there is a shortcoming in the way that that particular temple is run.

A total ban on fireworks is necessary.

The same rethinking is necessary in the case of having elephants at temple festivals.

The government and the court have to interfere and stop both fireworks and elephants at festivals.

If you ban something that happens only in temples, won't it be looked at as interfering in the affairs of a religious community?

That's why I said it should be banned in the entire Kerala, not just in a few temples.