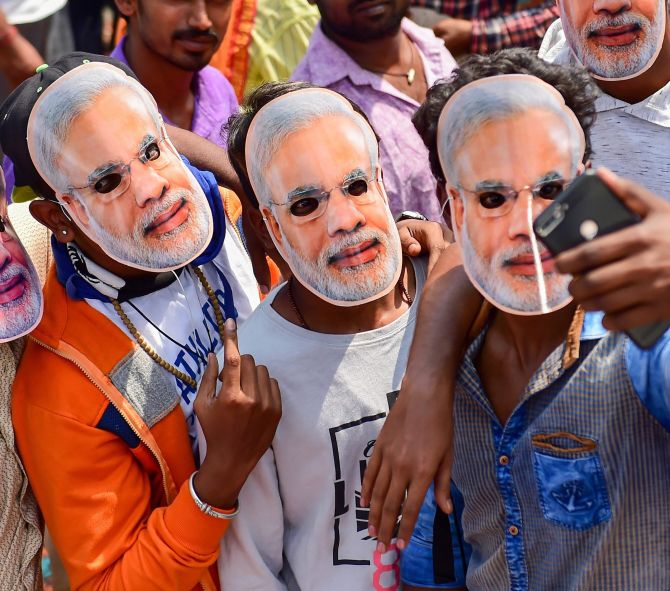 Sudhakar Reddy, general secretary of the Communist Party of India, has criticised Congress national President Rahul Gandhi and other regional parties over the breakdown in talks to form a united front against the Bharatiya Janata Party-led government.

His statement came after it became clear that the so-called Mahagathbandhan, or the Grand Alliance of Opposition parties to take on Prime Minister Narendra Damodardas Modi and the Bharatiya Janata Party in the 2019 election, will not materialise.

At of now, the electorally crucial state of Uttar Pradesh will see a three-cornered fight, with the BJP on one side and the Samajwadi Party and the Bahujan Samaj Party on the other, with the Congress bring up the the third force.

Similarly, in West Bengal, there is a four-cornered fight among the Left Front, the Trinamool Congress, the BJP and Congress.

Even as he hit out at the Opposition parties for their failure to forge a common front against the BJP, Reddy feels Modi won't get a majority and that there will be a fractured verdict.

"The next prime minister of India will be from an Opposition party and not the BJP," Reddy tells Rediff.com's Syed Firdaus Ashraf.

You have said that the Opposition leaders are unwilling to make sacrifices in order to defeat the BJP. Who do you hold responsible for this?

The Congress is responsible to some extent.

The Samajwadi Party and the Bahujan Samaj Party too rebuffed them.

Rahul Gandhi, instead of acting as a central leader, became dependent on Congress state leaders to take decisions on Opposition unity against the BJP.

There was a lukewarm and adamant attitude from the Congress which harmed Opposition unity.

Till last year it looked like the entire Opposition would come together to defeat the BJP. What changed subsequently?

As a matter of fact, before three months too, it was all right.

From the Left angle, we have been saying from the beginning that an all-India Mahagathbandhan was not possible before the elections.

We wanted an all-India broad understanding among the Opposition to take on the BJP.

We had to put up one-to-one candidate in as many states as possible.

In some states it was not possible, like West Bengal and Kerala where the Left has a strong presence.

We were expecting that the Congress will adjust with the Left parties.

Unfortunately, that did not happen.

Since the Congress did not adjust with the Left, the BSP and SP took an adamant attitude against the Congress in UP.

Still, we believe the votes will go to Opposition parties which have a bigger chance to defeat the BJP.

Are you saying the SP-BSP snubbed the Congress because the latter snubbed the Left in West Bengal and Kerala?

In the Rajasthan and Madhya Pradesh state elections, the Congress did not adjust with the BSP.

Later, these two parties (the SP and BSP) supported the Congress in Madhya Pradesh (to form a government).

The Congress should have taken some initiative in UP to form an alliance with them, but they did not do that.

Does the Congress feel threatened by regional parties?

The Congress is overconfident of winning the 2019 elections.

This happened after the results of the three assembly elections of Rajasthan, Chhattisgarh and Madhya Pradesh, which they won and where formed the government.

They think that the Congress alone can win in as many seats as possible.

It is this arrogant attitude that is harming them.

But no election survey has suggested that the Congress is going to win.

Exit polls also did not say that the three states will be won by the Congress.

Almost all of them predicted that the BJP will win in Rajasthan, Chhattisgarh and Madhya Pradesh.

So the Congress does not take such polls seriously.

Even in a state like Karnataka, an alliance happened because of the liberal attitude of the Janata Dal-Secular.

In 1996, then prime minister P V Narasimha Rao stitched an alliance with the BSP in Uttar Pradesh and damaged the Congress vote bank permanently. How can the Congress make the same mistake again?

Rahul Gandhi is not taking a decision (on the alliance).

He has left the decision to the Uttar Pradesh Congress unit.

It was too late as the SP-BSP had decided on an alliance.

These parties supported the Congress in Madhya Pradesh where it was strong.

So in return the Congress should have supported the SP-BSP in Uttar Pradesh where they are weak. They should have reciprocated.

Why will the Congress go for an alliance with these parties if it doesn't benefit from it?

That is true, but somehow the SP-BSP tactically thinks the Congress gets the upper caste votes.

These votes don't get transferred to them even if they tie up with the Congress.

I was told that this is one of the reasons why the SP-BSP alliance doesn't want to accommodate the Congress.

Can the Opposition defeat Modi in 2019?

There are two reasons why we believe that there will be no increase in terms of percentage of votes for Modi.

In fact, there will be a reduction because of unemployment, failure on (curbing) black money and attacks on Dalits and minorities.

By what percentage the vote share of Modi will fall, I cannot say, but definitely it will be not more than 10 per cent.

But because of nationalism and jingoism they will get 5 per cent more votes or get new voters's votes.

Still, there is a big chance that the Opposition parties will win in spite of them not coming together.

The SP-BSP will get a majority in Uttar Pradesh and in many states it will be the non-BJP parties that will win and get a majority.

There is a possibility they will come together and form the new government.

I feel strongly that it will not be possible for Modi to win the 2019 election.

In some states he will win, but not all states.

Who will lead the Opposition's charge?

It is the question of policies that is more important than an individual.

When Dr Manmohan Singh became prime minister, nobody thought before the election that he will become PM.

When H D Deve Gowda became prime minister after the 1996 election, nobody thought he would be the one.

The BJP once went with L K Advani as the next prime minister, but they did not win.

In 2014, the BJP won because of the massive failure of the Congress.

Modi and his charisma only added to it.

I don't think his charisma alone won the BJP the election in 2014.

How will the polarisation of votes affect the outcome?

In Bihar, there will be polarisation between two fronts.

In West Bengal, there will be polarisation among three fronts.

In some states like Assam, Delhi, Haryana, they will be in a good position because of polarisation.

Even in Punjab, I don't think the BJP will win as it will go to the Congress.

The so-called polarisation will not benefit the BJP.

This is all normal talk they use when the Opposition unites.

When the BJP does an alliance, it is a holy alliance.

In Maharashtra, the Shiv Sena abuses the BJP day in and day out.

They did not get the JD-U's (Janata Dal-United support on the Ayodhya issue, but still they went with them.

So, mahamilavat is the BJP and not the Opposition parties.

Sharad Pawar says the BJP will emerge as the largest party, but Modi will not be PM.

The next prime minister of India will be from an Opposition party and not from the BJP.

The BJP may be the single largest party, but not with a majority and there will be a fractured verdict.

Anti-Modi and non-BJP parties will be in a majority.

Some 69 per cent of the electorate voted against Modi in the 2014 election. What per cent of votes do you think he will get this time?