The Sangh has let it be known that a 'social' outfit called the Hindu Yuva Vahini, set up years ago by Yogi, did not have its approval, says Radhika Ramaseshan. 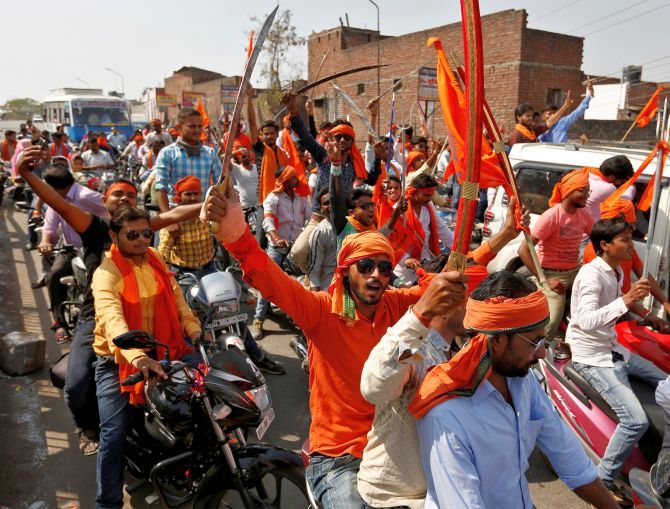 The pancham tal (fifth floor) of Lucknow’s Shastri Bhavan (Annexe) has traditionally housed the office of the chief minister of Uttar Pradesh.

When Yogi Adityanath became chief minister, however, he found other occupants on the pancham tal. Keshav Prasad Maurya, one of the two deputy CMs under Yogi, ensconced himself in the CM’s chamber, thinking Yogi would relocate to a new office being created for him at Lok Bhawan, next to the Bharatiya Janata Party headquarters.

But Lok Bhawan is work-in-progress. Yogi was informed about Maurya’s attempted overreach.

In no time, the deputy CM was ‘politely advised’ to move to his allotted office at the Vidhan Sabha. Maurya’s nameplate was pulled out before he shifted out and replaced with that of Yogi.

Maurya’s colleague, Dinesh Sharma, on the other hand, put discretion before valour.

In the initial days before Yogi was made CM, Maurya supporters raised slogans for him when a crucial meeting was underway in Lucknow after the election results were out.

Even now, voices in the BJP headquarters praise the work Maurya put in as the party’s helmsman for a year before the polls. “He enthused our cadre that was lying dormant after the Lok Sabha election,” a Maurya fan said.

Asked about his alleged ambitions, Maurya said: "Those making such insinuations have no idea of what our (BJP) organisation is about. The decision to make Yogiji (CM) was a good decision, it was the BJP’s decision. As for me, few have risen as fast in the hierarchy as I have."

But the chatter in the UP BJP was that Maurya was a useful counterweight to the CM, because Yogi’s individualistic streak still bothers the party and the Rashtriya Swayamsevak Sangh.

The Sangh has let it be known that a 'social' outfit called the Hindu Yuva Vahini, set up years ago by Yogi, did not have its approval because the Vahini, limited to Gorakhpur and parts of eastern UP so far, had fanned out in the western districts in an endeavour to run ‘parallel’ to the Sangh and its associates, the Vishwa Hindu Parishad and the Bajrang Dal.

The RSS also questioned Yogi’s credentials to rein in the activities of the VHP and the Bajrang Dal. The Sangh believed that the Vahini had instigated the socially combustible incidents that took place over the past two months in west UP.

On his part, Yogi tried to mollify the Sangh.

On May 15, at a function that was organised by the VHP and where he was chief guest, he praised the RSS as an organisation that ‘worked selflessly’ and called for a debate to settle the ‘communal versus nationalist’ issue.

Asked about the RSS-BJP's equations with the Vahini, UP BJP spokesperson Chandramohan said, "The organisation has never fought an election under its banner. No Yuva Vahini activist comes to our office. Its programmes go on as usual because it’s an autonomous outfit. The only difference is these days the media pays attention to it."

When asked who was behind the recent violence in Saharanpur, Meerut, and Sambhal, Deputy CM Sharma said, “The BJP’s workers are disciplined but I am not including the Yuva Vahini”, implying that the party was happy to let the Vahini remain on the radar of suspicion.

That the Vahini may be on the back foot was evident in what P K Mall, its general secretary, said. "Ours is not a registered party. Our three MLAs fought on the BJP’s symbol. Unfortunately, our organisation’s banner has lately been misused by our political opponents to defame the CM. It’s a common sight to see hoodlums wearing saffron gamchas and shouting slogans in Yogiji’s support. We investigated and found that they were Samajwadi Party activists. Maharaj (Yogi) is worried and has asked us to work in tandem with the BJP," he maintained.

On its part, the BJP was clear about the framework in which its relations with Yogi and his Vahini would be cast.

"Undoubtedly, Yogi is a very popular face in UP today. But that doesn't mean that he can conduct himself in the way he wants. There are red lines. We are sure he won’t cross those," a BJP leader said.

For instance, he added, Yogi would never transgress the mandate that was laid out in the BJP’s pre-poll manifesto called the sankalp patra.

"Yogi knows that this government must be different from its predecessors. That is why he is committed to following (Narendra) Modiji’s footsteps. He quickly took steps to efface VVIP culture by asking the ministers and officers to remove the red beacon from their vehicles. People have received the move well," the BJP leader said.