Pakistan's prime minister is trying to use the unrest in Kashmir to save his government, says Ambassador G Parthasarathy, a former high commissioner to Islamabad. 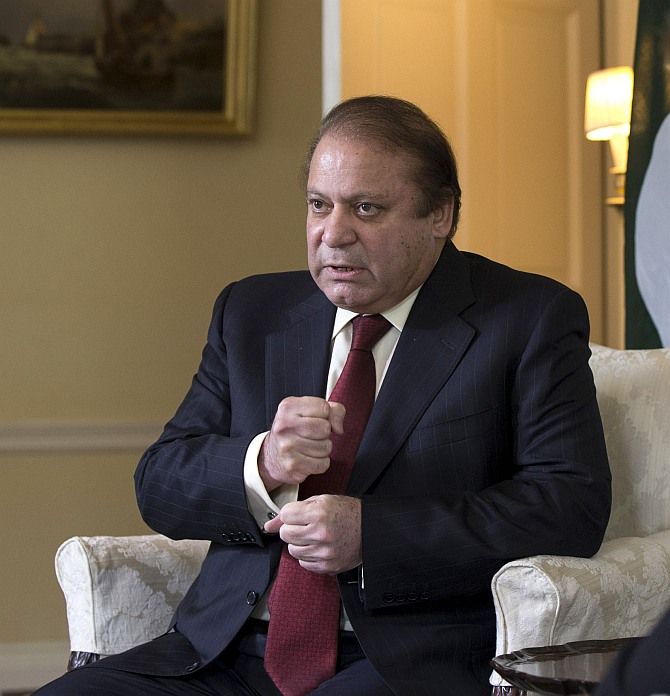 His growingly assertive army Chief General Raheel Shareef was breathing fire. General Shareef was claiming that the civilian government had done nothing to normalise the situation and take measures to rehabilitate displaced persons in the Pashtun tribal areas, after the army had launched the massive military operation, 'Zarb e Azb,' in the tribal areas, bordering Afghanistan.

This military operation was launched purportedly to cleanse the tribal areas of 'terrorists' of the Tehriq e Taliban e Pakistan, TTP, which had earlier been ISI 'assets' tasked to attack Afghanistan.

The army's military operations in the Pashtun tribal areas resulted in 1.8 million tribals fleeing their homes, with some 50,000 crossing into Afghanistan. The overbearing General Shareef had landed his country in a serious situation, which is set to promote violence, unrest and instability, across the Pakistan-Afghanistan border.

Some Pashtuns leaders are now questioning the legality and validity of the Durand Line, separating Pakistan and Afghanistan. This is a border that no government in Afghanistan has or will recognise.

With winter approaching, the misery of the displaced tribals will only increase and the public, egged on by the army, will hold the hapless Nawaz Sharif government responsible for the situation.

The Nawaz Sharif government is also confronted with a situation where three South Asian countries -- Bangladesh, India and Afghanistan -- are accusing Pakistan of fomenting terrorism on their soil.

Nawaz was expecting to get a political boost as host of the SAARC summit in Islamabad in November. It is entirely possible that these three SAARC countries would decide not to participate in the Islamabad summit at the highest level.

This would leave Nawaz in an embarrassing position of having to answer to the world why three of his South Asian neighbours are holding his government responsible for promoting terrorism on their soil.

Nawaz Sharif is being seen as deflecting charges connected with the involvement of his two sons and daughter in the Panama bank accounts scandal.

The final blow to Nawaz Sharif's standing came when Pakistan-based terrorists attacked the American University in the heart of Kabul. An enraged Afghan President Ashraf Ghani rang up, not Nawaz Sharif, but his army chief General Raheel Shareef, to launch a bitter complaint about what had happened.

The Afghan president thus directly indicated that he regarded General Shareef and not Nawaz Sharif as the head of the government in Pakistan!!

In these circumstances, it was inevitable that Nawaz Sharif would try to deflect domestic and international attention away from these developments and Pakistan's growing isolation in the region and the world, by focusing on to the unrest in the Kashmir valley.

As soon as the unrest in Southern Kashmir commenced, Nawaz Sharif went on the offensive. He whipped up passions in Pakistan's parliament and got resolutions passed, expressing solidarity with the people of Kashmir, while condemning alleged human rights violations by India.

He drew a blank with the permanent members when it came to getting support at the UN Security Council. The UK asked him to settle issues bilaterally with India. The US also advised talks with India. The Russians and French remained silent, signaling that they were continuing their policies of requiring issues between India and Pakistan to be settled bilaterally.

President Hollande of France is fully occupied with the leak of data on Scorpene submarines being supplied to India. It is, after all, a deal running into billions of dollars. President Putin, in turn, will be looking forward to attending the BRICS-BIMSTEC Summit in Goa. Neither is going to have the inclination to gratuitously offend India, to please a financially weak and jihadi oriented Pakistan.

Even Pakistan's 'all weather friend' China remains committed to its policy of calling on India and Pakistan to settle issues bilaterally. China knows that India has been silent on allegations of violations of human rights by it in Tibet and Xinjiang.

Pakistan did receive some solace from the secretary general of the Organisation of Islamic Conference, expressing solidarity with its views on Jammu and Kashmir. But Pakistan also knows that for nearly three decades now, individual OIC members routinely back such OIC resolutions, but do not wish to get involved in international forums on the issue of Jammu and Kashmir, against India.

In the meantime, India has thrown a spanner in the works, with Prime Minister Narendra Modi coming out openly, laying claim to the whole of Jammu and Kashmir and focusing on human rights violations in Baluchistan and Gilgit/Baltistan.

Under siege from within, Nawaz Sharif has to be seen to be pro-active on the issue of J&K. He is heading to New York to spit venom on India at the UN General Assembly. Everyone, with any knowledge of the UN, knows that everyone forgets speeches made by prime ministers on stale and long-pending issues, the very next day. They are meant primarily for domestic audiences.

Nawaz Sharif will get a big splash in the Pakistani media and things will be back to business as usual in New York, the next morning. He has, therefore, devised another gimmick to keep Pakistani attention focused on Kashmir rather than its internal problems.

He has decided to send 22 MPs roaming all around the world, espousing Pakistan's cause. He will then be seen in the Pakistani media as being innovative and active. The MPs will return with tall tales about how successfully they persuaded countries they visited to support Pakistan on Jammu and Kashmir.

Interestingly, on the very day Nawaz Sharif told the world about his ideas on Kashmir, the prestigious National Press Club in Washington hosted a function where the woes of the people of Baluchistan were openly voiced. A British human right activist demanded greater international access and scrutiny of human rights abuses in Baluchistan.

One wonders how with all this happening, Sharif confidently asserts that that his 22 envoys can help him 'strike the collective conscience of the international community during my address in the UN in September.'