To rise quickly in the PLA's hierarchy, you need to be close to Xi Jinping.
Retired RA&W officer Jayadeva Ranade on the changes in China's military leadership. 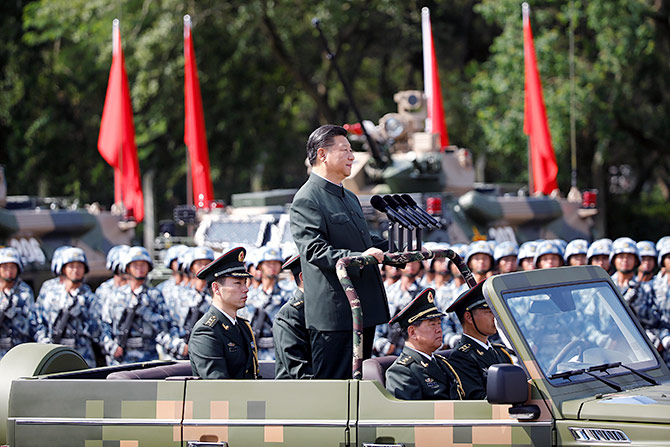 Xi Jinping has begun effecting appointments to top positions in the People's Liberation Army in the run-up to the 19th congress of the Chinese Communist party, now officially announced to open in Beijing on October 18, 2017.

The new commanders of the PLA navy and the southern theatre command, both born in 1956, were the first to be appointed with their promotions being simultaneously announced in January 2017.

It is for the first time in the PLA's 90-year history that a naval officer has been appointed to head a theatre command.

More recently, on August 26, 2017, General Li Zuocheng, a 'hero' of the Sino-Vietnam war in 1979 and commander of the PLA army (PLAA) (ground forces), was promoted to head the joint staff department of the central military commission, replacing General Fang Fenghui.

Shu Guozeng, a native of Hangzhou who worked under Xi Jinping when he was party secretary of China's Zhejiang province, was also appointed head of discipline inspection at the general office of the Communist party's central committee as well as the central committee's general office, which report directly to Xi.

General Fang Fenghui, handpicked by then Chinese president Hu Jintao and appointed first as commander of the sensitive Beijing garrison and later promoted by Xi as head of the joint staff department is understood to have been placed under investigation on charges of corruption.

His last public appearance was in August when he hosted General Joseph Dunford, chairman of the US joint chiefs of staff.

Days later, on September 1, 2017, General Han Weiguo was appointed commander of the PLAA and 60-year old General Ding Laihang as commander of the PLA air force (PLAAF). Both have a close past association with Xi which appears to have worked in their favour.

General Han, 61, who now heads China's ground forces, has held senior military positions across the country, including in Fujian, Nanjing and Beijing. His service in Fujian in the 1980s coincided with that of Xi, then the deputy mayor of Xiamen.

Retired PLA Colonel Yue Gang, a commentator on military affairs, described General Han as 'a rising star' and said 'He has a well-rounded resume and he has also shown a rather sophisticated understanding of military reform.'

Similarly, the career of new PLAAF commander General Ding overlapped with Xi's term in Fujian. general Ding was chief of staff of the eighth corps based in Fuzhou in 2001 and later the same year was head of the PLAAF in Fuzhou. Xi was governor of Fujian province from 2000 to 2002.

1952-born Feng Danyu, the grandson of the famous Chinese General Feng Yuxiang, has this month been appointed deputy commander of the PLA navy. More promotions are likely soon.

Important is the September 6, 2017 release of the list of delegates of the PLA and People's Armed Police (PAP) to the 19th party congress.

Initial scrutiny reveals that the combined list has 303 delegates from 31 units, or 12 more than to the 18th party congress in 2012.

Of them the PLA has 253 delegates, an increase of 2 over the 251 delegates who represented it at the 18th party congress.

The PAP has 50 or an increase of one.

The State-owned Global Times newspaper on September 7, 2017, quoted a Wuhan-based military professor as saying, 'The number of units increased due to the ongoing military overhaul launched in 2015, which split the former four military headquarters -- staff, politics, logistics and armaments -- into 15 new agencies under the central military commission in 2016.'

Earlier in May, the PLA Daily emphasised that election procedures must stress 'political quality and integrity' and candidates must 'firmly show knowledge of the ideology, be loyal and reliable, and resolutely implement the fundamental principles of the party's absolute leadership over the army'.

Pertinently, unlike in 2012, when there were no Tibetans among the delegates, this time the list includes three Tibetan personnel.

Missing, however, are Fang Fenghui and Zhang Yang, director of the powerful general political department now merged into the CMC. Both are rumoured to be under 'investigation' on charges of corruption.