'The wonderful thing about being a liberal is that you can go ahead and be the very last one left standing.'
'So go ahead and fling social media faeces at us, tell us how irrelevant we are, and accuse us of opposing Modi to be cool,' says Mitali Saran.
Illustration: Uttam Ghosh/Rediff.com 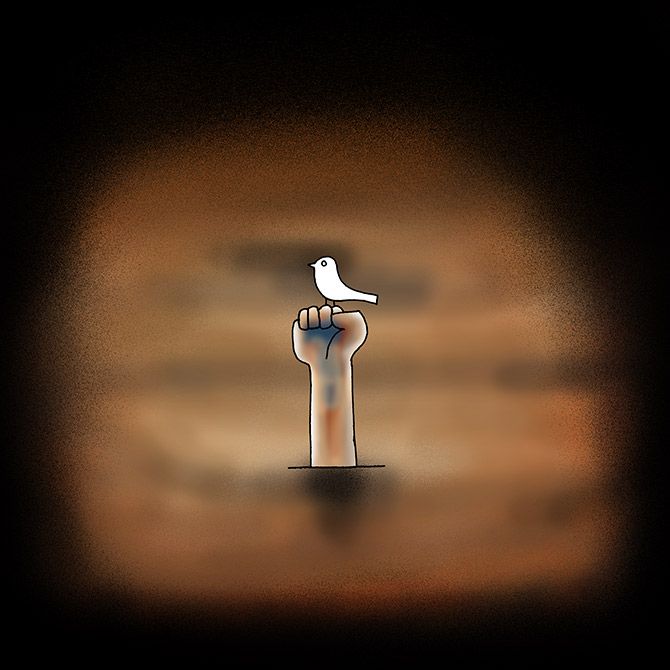 Sometimes, after I return from a trip to social media, I have to take a moment to compose myself.

Only when the whites of my eyes are no longer visible, and my blood pressure has stabilised, can I sit down and calmly cuss the idiots out over dinner like a normal human being.

Just kidding. They're not idiots, they just have views different from mine.

Just kidding! They totally are idiots.

The same Modi-backer who claims to have arrived at her choices via cool-headed independence is quick to dismiss opposing views as motivated by blind hatred, by slavish loyalty, by political puppetry or financial incentive, or (my personal favourite) by the desire to be 'fashionable.'

I figure this last accusation arises out of the notion that power and success so obviously require compliance and deference, that critique can only be a form of attention-grabbing cockiness.

The other accusations seem to arise from the belief that your views must be dictated by something suspect -- by class, political allegiance, sour grapes, or payroll -- anything but your own principles.

The Modi-backer, for her part, must resent her views being perceived as springing from bigotry, religious chauvinism, venality, insensitivity, jingoism -- anything but her genuine desire to see a man of action stop corruption in its tracks and develop the hell out of the country.

I feel her pain, and feel that I should make an effort to reassure her that I understand her.

So here's the best case scenario: I have nothing against any economic good that the BJP can accomplish in terms of fighting corruption and raising incomes without trampling over rights and environmental regulations.

But if she thinks that she can cherrypick economic roses out of a nasty bouquet of social hemlock, she is either unaware of the agenda, or aware but certain of her own acceptability to the majority and uncaring of her fellow citizens, or deluded into thinking that Modi does not represent the Sangh despite his tireless, lifelong service to it.

There, does that make it clearer?

Seven years ago, when the world was merely horrible, rather than horrible and proud of it, I wrote a column 'Left brain-right brain.' It paraphrased a friendly conversation about Palestine.

Re-reading how it degenerated into insults hurled across a deep, wide belief gap, I recognise that dynamic as today's mainstream.

The only difference is that now the conversation is about Indians and other Indians.

The BJP's storming of Uttar Pradesh has disheartened a lot of liberals, who are keenly feeling their political marginality.

But the wonderful thing about being a liberal is that you can go ahead and be the very last one left standing.

That's the principle of the thing -- individual rights, down to the last individual.

So go ahead and fling social media faeces at us, tell us how irrelevant we are, and accuse us of opposing Modi to be cool.

Tell us about our 'political masters.'

Tell us how you felt put down by our superior tone, so you chose a religious supremacist.

And regardless of what you believe about the source of our respective stupid opinions, in the same way that mine reflect on me, know that yours reflect on you.