'Russian diplomacy is presumably at work.'
'The ground is slippery, because "territorial sovereignty" is a hugely sensitive issue,' says Ambassador M K Bhadrakumar. 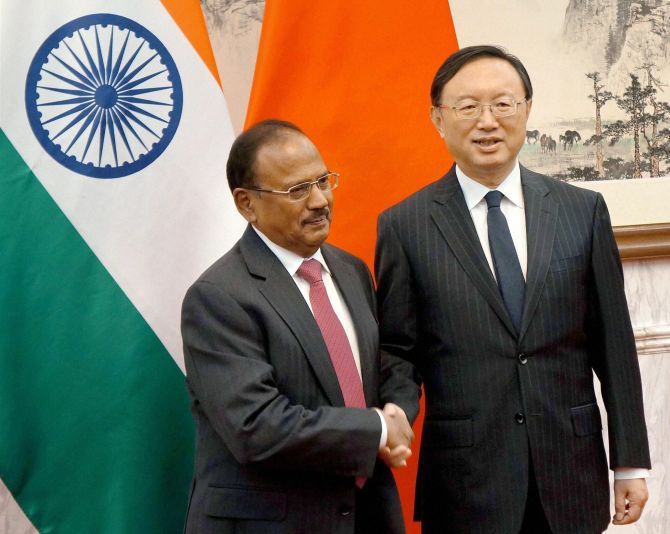 Through the month-long India-China standoff in Doklam near the Sikkim border, Moscow has not spoken.

Russian diplomacy is presumably at work. The ground is slippery, because 'territorial sovereignty' is a hugely sensitive issue.

Meanwhile, top Kremlin official Nikolai Patrushev, secretary of Russia's Security Council and a close aide to President Vladimir Putin, is travelling to Beijing on July 26 ahead of the 7th meeting of BRICS High Representatives for Security Issues (July 27-28).

Patrushev is traveling a day in advance at the invitation of Meng Jianzhu, member of the politburo of the CPC central committee and secretary of the committee of the political and legal affairs under the CPC central committee, and State Councilor Yang Jiechi to attend the 4th meeting of the China-Russia law-enforcement and security cooperation mechanism and the 13th round of China-Russia strategic security consultation respectively.

The cascading regional tensions in South Asia would have a bearing on international security.

And Russia cannot but feel perturbed that relations between India and China, its two key Asian partners, have reached a flashpoint.

Moscow's big worry will be that Washington may try to fish in troubled waters.

There are incipient signs already.

A defense analyst in the RAND Corporation, Pentagon's think-tank, has expounded a bizarre thesis that Russia is paranoid about the Shanghai Cooperation Organisation's growing stature as a security organisation and it is a platform for China to expand its influence in Central Asia.

Therefore, in the RAND analyst's opinion, Moscow will be quietly pleased that India is about to checkmate China within the SCO.

The underlying schadenfreude is not at all surprising.

As Winston Churchill once said about the Bolshevik Revolution, SCO is a regional organisation that the US wanted to throttle in its very cradle.

The worst strategic nightmare for the US has been that the SCO (and BRICS) might gain traction, bringing together three Asian giants under a single canopy. (It’s no coincidence that 'pro-American' lobbyists in India happen to be the most trenchant critics of SCO and BRICS.) Where the RAND analyst badly fumbled is in his naivete that Russia stands to gain if SCO gets paralysed.

On the contrary, given the deep chill in US-Russia relations, Moscow's need for strategic depth is greater today than ever before.

Having said that, the RAND analyst estimates correctly that India-China tensions may slow down SCO's functioning. Chinese commentators also voice disquiet on this score.

'Given the tensions over China-India relations, India will bring its mentality of counterbalancing China to the SCO, and thwart initiatives favouring China.'

'India's membership at the SCO creates a structural quagmire for the organisation.'

'Soon after joining the SCO, India frequently caused friction over its border with China. For this reason, the SCO is likely to enter a strategic standstill. India's participation in the SCO will do more harm than good in the short and medium term.'

To quote Xiao, 'At present, Xinjiang is at a critical stage in terms of stability and growth.'

'In recent years, security coordination in the SCO has been largely related to Xinjiang... However, China and India have disagreements on anti-terrorism.'

Russia and China would have a convergence insofar as it is a matter of time before the US wades into India-China tensions. (Alas, many war mongers in India are easily identifiable as people owing fealty to US interests.)

Washington will wait for tensions to aggravate so that it is seen as responding to India's plea for help.

A commentary in the Global Times newspaper on Tuesday, July 25, took note of this:

'There are certain forces in the West that are instigating a military clash between China and India, from which they can seek strategic benefits at no cost to themselves.'

'Washington applied this scheme in the South China Sea disputes... In fact, neither China nor India wants a war.'

'China has addressed most of its boundary issues with its neighbours through negotiations.'

The big question is how National Security Adviser Ajit Doval, who joins Yang and Patrushev in Beijing on Thursday, will apprise the 'co-relation of forces'.

The good part is that Doval is an old familiar face to the Russian security establishment.

The known unknown, therefore, will be what role Patrushev might play in Beijing between July 26 and 28 to ease the India-China standoff.