News
Business
Movies
Sports
Cricket
Get Ahead
Money Tips
Shopping
Sign in  |  Create a Rediffmail account
Rediff.com  » News » Will Imran bowl a googly and invite Modi to his swearing-in?

Don't be surprised if Imran invites Modi and other South Asian leaders for his swearing-in ceremony, says Colonel Anil A Athale (retd). 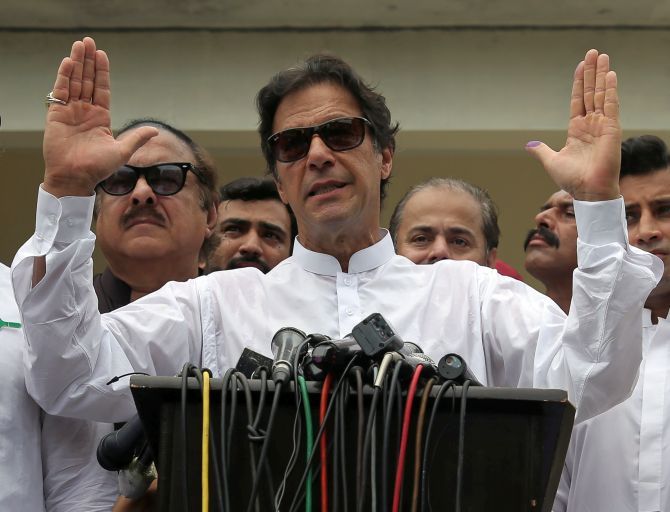 Most analysts in the Indian media have dismissed Pakistan's elections as nothing more than a re-assertion of the army's dominance.

Imran Khan's victory has been attributed to his proximity to the military establishment.

Taking off from this, most Indians have felt that nothing much has changed in Pakistan and that old policies are likely to continue.

As a long-time observer of Pakistan, I feels otherwise.

For starters, don't be surprised if Imran does a Modi and invites the Indian prime minister and other South Asian leaders for his swearing-in ceremony.

In his cricketing days, Imran was famous for his deceptive outswinger, and this will be his signature political move as well.

It will demonstrate Pakistan's desire for peace with India and earn brownie points domestically as well as internationally.

India will be put in a tricky situation.

If Modi accepts the invite, he stands to alienate his core constituency that supports his policy of no contact with Pakistan till it gives up supporting terrorism. India's Opposition parties will seize the opportunity to criticise Modi for being soft on terror.

If Modi rejects the invite and does not attend Imran's swearing-in, he will be accused of lacking statesmanship and spurning peace overtures.

Thus, the ex-pacer's googly (pardon the mixed cricketing metaphor) is likely to present the Indian PM with a Hobson's choice. Dammed if he does and dammed if he refuses.

Deft politician that he is, Modi may find a diplomatic excuse to skip the event and instead send Home Minister Rajnath Singh or External Affairs Minister Sushma Swaraj to represent India.

According to some analysts the July 25 elections in Pakistan went as per the script dictated by Pakistan's 'Deep State' (read army).

No one was surprised that Imran Khan's Pakistan Tehrik e Insaf party came close to winning a simple majority in the national assembly.

The real surprise is that despite the army's obvious efforts to finish off Nawaz Sharif's Pakistan Muslim League-Nawaz, the party seems to be neck and neck in the race to retain power in the all-important Punjab province.

It will be fair to state that the army has not fully succeeded in its efforts to punish Sharif's party.

The results in Punjab are also a result of the developmental efforts of Shabaz Sharif as chief minister and augurs well for that country's future.

In Sindh, the Pakistan Peoples Party has retained its dominance while the PTI has retained Khyber Pakhtunkhwa (the old North West Frontier Province). Thus, Imran's party's success is only partial.

In a sense, this election has proved that democracy seems to be taking roots in Pakistan and over time the army's influence will wane.

Imran's victory speech struck a conciliatory note vis a vis India. If it reflects the thinking in the Pakistan army, then it is a sign that the latter is slowly taking a realistic view of India-Pakistan relations.

One reason for this change could well be the fear of America under Donald J Trump as well as the Chinese nudge to improve ties with India.

In his remarks after the Helsinki summit with Russia's President Vladmir Putin, Trump made a very disparaging remark on Pakistan.

Given his unpredictability, Pakistan is fearful that America may well cut off its arms supply and instead concentrate on building up India's conventional military capability.

The US can also put tremendous economic pressure on Pakistan through its control of the International Monetary Fund. Pakistan is in the economic doldrums with large repayments of past loans falling due.

Pakistan has noted with concern the events in Sri Lanka. When Sri Lanka failed to repay the loans taken for the Hambantota port projects, it had to cede the port to China for 99 years.

Pakistan's euphoria over the China Pakistan Economic Corridor is on the wane as the reality of indebtedness comes to bite it.

The Pakistan army may well have concluded that the economic costs of confrontation with India are becoming unbearable and an alternative has to be found.

There is a possibility that the new Pakistani regime may await the outcome of the next Indian general election before making any substantial move. But that will not stop it from trying to score media points in the interim.

So, Mr Modi may expect an invite for Imran Khan's swearing-in.

Remember, Pakistan, while otherwise hostile to India, often acts like a copycat when it comes to politics or even films!

Colonel Anil A Athale (retd) is a military historian and strategic analyst based in Pune and affiliated with the think-tank Inpad. 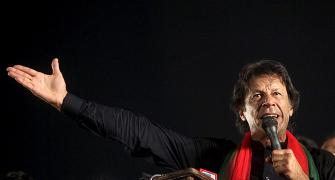 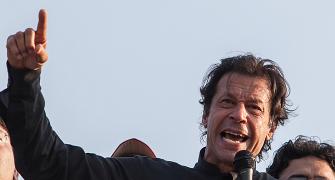 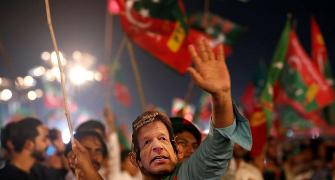