Not only will the move help keep out stray, disinterested walk-ins, but also help maintain our heritage better, says Anjuli Bhargava. 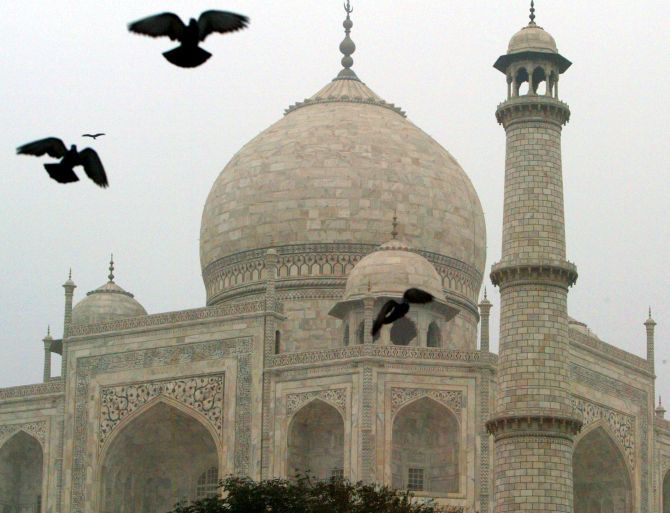 IMAGE: The issue of monument pricing is rankling. Why is it that the entry fee to the Taj Mahal in Agra is much less than that to the Eiffel Tower in Paris? Photograph: Kamal Kishore KK/Reuters

On a recent visit to Rome -- one of my favourite cities in Europe -- we quite literally went broke. With the children in tow, we visited the Vatican, the Colosseum, did two sound and light shows, the Villa Borghese in addition to a couple of other museums and paid smaller entrance fees for four at god knows how many other spots.

Essentially at most places in Rome, if an entry or viewing fee is chargeable, it is charged. Barring the Trevi fountain, the Spanish steps and a couple of squares like the Piazza Navona where one can devour Bernini’s work for free, almost every spot burns a hole in one’s pocket. Skip the line and you are beginning to talk serious money. By the end of the seventh day, I actually worried whether we’d have enough left for all meals of the day. I exaggerate a bit since we do have credit cards, but you know what I mean.

In general, entrance fees in most cities in Europe have to be budgeted for, and, in many cases, amount to as much as one pays for a decent Airbnb or bed and breakfast place. Throw in a show or two -- the Marionette Theatre in Vienna or the London musicals for instance -- and you have very little left for anything else. The weak Indian rupee doesn’t help matters.

For years, this issue of monument entry pricing has rankled me. Why on earth do we pay through our nose to view practically anything -- even the tiniest and the most inconsequential spots -- in any country and why do we charge a pittance for them to view even our most dramatic monuments, history, culture and heritage?

I call it the underdog pricing. For some odd reason, we seem to value our own stuff very little and seem to think the world of everything that is foreign. I know several Indians who will pay an arm and a leg at Madame Tussauds, Universal Studio or some such inane destination but baulk -- if at all they visit -- at paying anything at all at say the Taj, the Gwalior Fort or anything home-grown at all. If it’s in India, it’s their birthright to get it free!

Unless there are any international treaties or conventions to which India is a signatory, I see no problem at all in charging differential amounts to whoever we choose. Isn’t The Louvre discretionary when it allows under-26s who reside in the European Union states free entrance? Most places offer discounts to students and some to senior citizens. We can offer them to fellow Indians if we so desire.

At the Taj, for instance, why should the entry fee for foreign tourists be as low as Rs 1,000? In magnificence, I don’t think the Eiffel Tower can hope to compete with the Taj. It’s an attractive tall tower but is it anywhere close to the Taj Mahal? I, for one, don’t think so. Let’s begin by charging at least €25 (Rs 1,970) like the Eiffel Tower does (top with lift access).

Here’s my proposal to whoever is listening. Revalue all the country’s monuments based on their real worth. We have some of the most magnificent stuff strewn across this country. If we don’t start valuing our own heritage more, how can we expect anyone else to?

Charge Indians a far higher amount for entry. Rs 100 or Rs 150 for the Taj, for instance. It will help you keep out stray, disinterested walk-ins. It will help cut out the ruffians who often do more damage while imbibing very little. A differential fee can be offered to below poverty line card-holders, students or anyone else we choose.

Charge non-Indian passport holders 10 or 20 times the amount. Let the entrance fee for the Taj and dozens of dramatic forts all over the country pinch. Let only those who are truly interested and are willing to shell out the amount come in. We may lose an occasional foreign tourist but it will be more than made up by the steeper fees charged all around.

However, charging a stiff entrance comes with a caveat. Beef up what’s on offer so that no one who visits feels cheated or disappointed. Let the charges be consonant with what we need to maintain our monuments better and let the money be used well. Let’s value, love and preserve what we have and stop looking to the West for every answer. Let’s set our own rules for a change.

If someone is unhappy with our lack of egalitarianism, they can take a hike -- which of course is free.