'Growing up in Karnataka, in a middle class and forward caste background, Ambedkar did not enter our consciousness at all, I realised.'
'The 'exclusion' of sections of our society was not only physical; it was comprehensive in the sense that all aspects of their lives including the life of an exceptional intellectual and stalwart had been under-understood by people of my class, I thought,' says Ambassador B S Prakash.
Illustration: Uttam Ghosh/Rediff.com 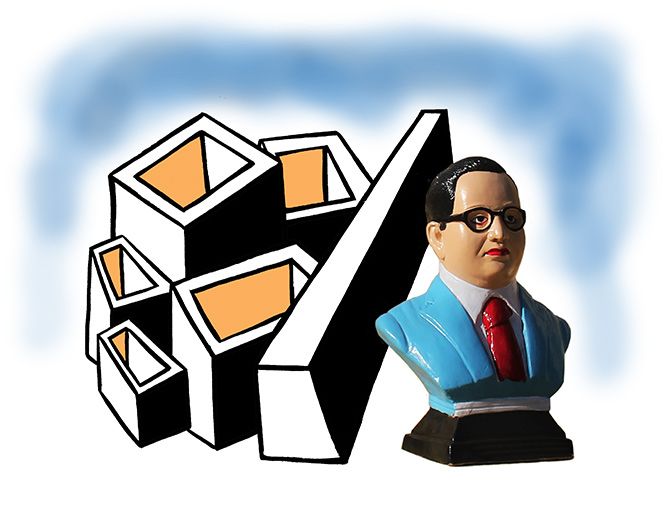 The cascading coverage about Babasaheb has ended. For a few days around April 14, the 125th birth anniversary of B R Ambedkar, I became anxious. Wherever I turned and whatever I read, his name was dominant.

Speeches, statues, television discussions, seminars. Every person affiliated to some colour from saffron, to Tiranga, to red, black, or green seemed to speak his name and claim his legacy.

So why should I become nervous, you ask me. Before you become indignant or rise up in rage, I better hasten to clarify that it is not for reasons you may be thinking. It is for something quite different!

You see, I consider myself an educated person. Apart from a post-graduate degree and the stamp of UPSC approval that gave me entry into the foreign service, I have served the government, if not the country, for 40 years, retiring after representing India in some countries.

And yet, why was I hitherto so ignorant about Bhim Rao and the role played by him in so many diverse areas? Many others, who I had not suspected of either erudition or deep reflection -- Rahul Gandhi, for instance at one end, and my local municipal counsellor Guptaji at the other -- seemed to know so much more about Ambedkar. Others swore that their conscience was awakened after reading him; yet others attributed their fame or success to him.

To add to my confusion, his name was being invoked in complex electoral calculations. The mathematics of some of the caste equations just defeated me, never having been good at that subject.

His prescience about the nature of the State of Pakistan was also being discussed in a seminar and after having spent decades as an Indian diplomat, I was not even aware that Ambedkar had written a book on the subject, before that country even came into being!

Pray, why was I so unread or under informed, I asked myself and had a moment of angst.

Two or three things, I did know.

He was the key figure who gave us our Constitution. His unmatched scholarship on the making of other constitutions, his legal acumen and prodigious hard work had made him the best qualified for drafting the new Constitution.

Gandhi himself had suggested his name and Ambedkar had delivered an outstanding document that has withstood the test of time, notwithstanding numerous efforts to tamper with it, unfortunately, sometimes successfully.

This I knew, first, when I studied for the UPSC examination and later, when I saw the excellent Samvidhan, the Shyam Benegal documentary on the making of our Constitution on Rajya Sabha TV.

Second, I knew that he had done decisive work for the weaker and oppressed sections of our society, particularly Dalits. He had been hailed as the emancipator of Dalits, but everyone also acknowledged that this emancipation was far from fully realised. I must admit that my knowledge of this issue was getting a bit hazy in recent years.

While I understood and empathised with the justification for reservations for those who had suffered centuries of being 'untouchables,' let alone speak of deprivation in education, employment or status, I sensed that issues had become a bit cloudy.

Why was the clamour by every section to become 'backward'?

What was the difficult dynamics in the battle between OBCs and Dalits?

How did the 'creamy layer' manage to stay below, instead of rising to the surface?

I sensed that some of this terminology was not due to Ambedkar and that his core message was about justice and removal of inequality, and not about perpetuating the caste wars. I was not sure why many of his adherents or opponents seemed to believe that a 'burning issue' meant burning buses.

I knew a little bit more. That he had given up Hinduism and had turned Buddhist. But here too, I was a bit unsure when I saw photographs of devotees in Buddhist robes 'worshipping' his photograph or statue.

Had not Buddha preached against idolatry or for that matter adulation of a person as the saviour? Had Babasaheb himself not cautioned against such hero worship?

I must also admit that I was puzzled about this aspect of Ambedkar everyday as I entered Noida from Delhi and saw Mayawati's architectural tribute to him -- giant statues of Babasaheb with his finger raised to admonish or exhort us. I was not sure which.

But this was the extent of my knowledge and trying to catch up with what was being said, I felt that it was hopelessly limited. Compared to what I had absorbed about Gandhi or Nehru, my awareness of Ambedkar's life and thought was woefully inadequate.

Why had I not been taught about his trenchant criticism of the structure of Hindu society, his call to tear down 'Manu aur Jativada,' his analysis of the abiding and inherent inequality in our history, of his uneasiness with Gandhi and differences with Nehru?

What made us miss out learning about the role played by Ambedkar as the 'slayer of all Gods' as Pratap Bhanu Mehta had put it forcefully? Considering myself as fairly well schooled, how come that I had not read a single essay, let alone a book by him? Was it my fault or a result of my circumstances, I wondered.

Growing up in Karnataka, in a middle class and forward caste background, Ambedkar did not enter our consciousness at all, I realised.

The 'exclusion' of sections of our society was not only physical; it was comprehensive in the sense that all aspects of their lives including the life of an exceptional intellectual and stalwart had been under-understood by people of my class, I thought. Thanks for staying with me, as I have honestly explained my solipsistic concerns. From noble intentions and honest regrets, to current realities.

To assuage my conscience, I began to follow what others were saying. Soon I realised that we had turned this important moment into the ritual obeisance in which we excel on any janma jayanti.

My bewilderment was, however, complete, as I read the comment below by Mayawati, who herself can justifiably claim to have realised at least one of Babasaheb's goals -- of 'empowerment.'

Mayawati was criticising Rahul Gandhi's oratory about Ambedkar. Rahul, the ultimate innocent in most matters political or social, had apparently compared Rohith Vemula, the Dalit Hyderabad student who had committed suicide, to Ambedkar. Mayawati was understandably indignant.

'Comparing Vemula to Babasaheb is like comparing Rahul Gandhi to Jawaharlal Nehru,' she fumed. Touche! But she does not stop there. 'If he is to be compared at all, it should be to Nelson Mandela or Kanshi Ram,' she declared. Don't believe me? Please Google for yourself.

Ambassador B S Prakash is a former Ambassador and a long standing Rediff columnist.