The ancient Indian myth that could save our oceans

Today humanity is churning the ocean with a thoughtless vengeance -- with toxic wastes, plastics and hazardous substances being dumped into our once pristine seas. And there is no benign Lord Shiva to rescue us from the samudra manthan that is the result of our collective greed, says Shyam Saran. 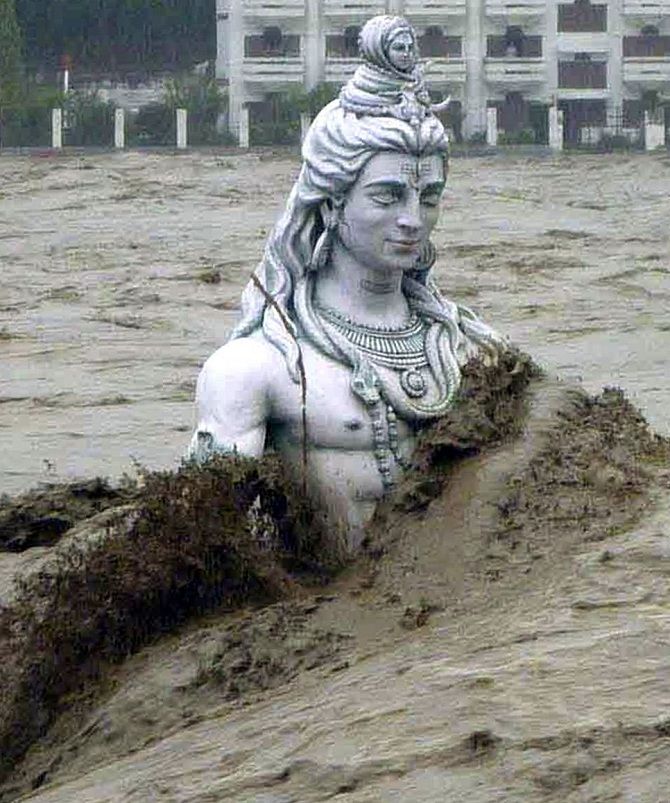 IMAGE: When the flooded Ganga submerged a statue of Lord Shiva in Uttarakhand in 2013...
In the samudra manthan myth, the ocean is a receptacle of both the poison that can wipe out all existence and the divine nectar that can bestow immortality. If Lord Shiva had not swallowed the poison and held it in his throat, all the treasures yielded by the ocean would have been wiped out.
Photograph: Reuters.

The ancient myth of sagar manthan (churning of the ocean) contains a profound message of the indispensability of the oceans to all existence.

In the myth, the ocean is a receptacle of both the poison, halahal, which can wipe out all existence as well as amrita, or divine nectar, which can bestow immortality. If Lord Shiva had not swallowed the poison and held it in his throat (thus becoming Neelkantha or the blue-throated one), all the amazing treasures which were yielded by the ocean, such as Kamadhenu, the sacred cow, which grants all wishes and Kalpavriksha, or the tree which could grant every boon, and many other treasures, would have been wiped out by the toxic poison also contained in the ocean’s embrace.

Is it not true that today humanity is churning the ocean with a thoughtless vengeance, with toxic wastes, plastics and hazardous substances being dumped into our once pristine seas?

Very soon the treasures that the oceans hold to make life itself possible will be consumed in a pervasive swirl of poisonous waters that are a modern incarnation of the deadly halahal. Except that there is no benign Lord Shiva to rescue us from our collective cupidity.

The degradation of our oceans is not new, but it has now reached proportions which threaten to upset the delicate and life-sustaining ecological balance of planet Earth.

We take the ocean for granted. Its vastness itself inures us to the cumulative effect of the poison we feed into it and the rapacity with which we ravage its resources.

To add to the mounting stresses and strains we put on our ocean space, there is the additional impact of global climate change. The planet’s weather is integrally linked to the state of the ocean, the pattern and direction of ocean currents and the chemical composition of sea water.

In 2011, an Oxford University research group drew attention to the increase in ocean acidification as a result of increased absorption of atmospheric carbon dioxide. This was leading to ocean hypoxia, or low-oxygen content in the water, severely affecting marine flora and fauna.

There were marine "dead zones" spread across the world’s oceans, where no marine life could survive any longer. At last count, there were an estimated 405 such dead zones, and their number is likely to increase in the absence of drastic remedial intervention.

The same Oxford group warned that the growing incidence of hypoxia-induced dead zones were "creating conditions similar to those found at the start of major die-offs of marine species in the past." The group warned that "we may be at the cusp of another mass extinction."

An ominous prediction of "pralay" or universal annihilation, which our ancient scriptures speak of.

Also read: Climate change warnings we can no longer ignore

Where does the modern halahal come from?

A major source is run-off from agricultural pollution, in particular the increasing use of chemical fertilisers and pesticides, which contaminate rivers and eventually the seas.

There are massive quantities of untreated urban waste and sewage, generated in particular by cities and population centres concentrated at the coasts. It is no accident that there are "dead zones" emerging in the seas around Mumbai and in the Bay of Bengal.

The most dangerous and rapidly accumulating hazardous waste floating in the ocean and being absorbed in the water is plastic. Plastic waste is literally choking our ocean space, and we are still dumping an incredible 8 million tonnes each year.

Plastics degrade very slowly, almost over 400 years, but already there is an average of 13,000 pieces of plastic litter to be found over each sq km of ocean surface. The Pacific Ocean Garbage Patch, which is the size of Texas and located in the northern part of the Pacific, consists mainly of plastic.

What is more, some classes of plastics break down into micro particles, which are then ingested by fish and thus find their way into the food on our table. The health impacts are incalculable.

While we continue to treat an ocean as a vast dumping ground for the rubbish generated by modern civilisation, we are also guilty of exploiting its resources beyond its capacity to regenerate.

Ecological sustainability in essence means not extracting resources from our planet beyond its capacity to replenish and recover. This is also imperative from the point of inter-generational equity. We must leave for succeeding generations the means of sustenance that we ourselves have been fortunate to enjoy.

But thanks to unrestrained use of bottom trawling, dynamiting and even poisoning, several species of fish are in danger of extinction.

Coral reefs are being destroyed both due to the dumping of toxic waste and the damage caused by trawlers. While corals constitute only 0.1 per cent of the seas, they are home to an astonishing 25 per cent of all marine species. Coral reef loss can, therefore, have a disastrous impact on availability of fish, which are a major source of protein, particularly among developing countries.

Among the Sustainable Development Goals (SDG) adopted in December 2015, SDG 14 pertains to the oceans, with the objective to "conserve and sustainably use the oceans, seas and marine resources for sustainable development."

A whole new concept of the Blue Economy has now been developed to pursue such sustainable development through international cooperation.

However, the degradation of the ocean continues apace and the international political environment today is even less propitious for such cooperation than ever before.

The UN Ocean Conference is scheduled to be convened from June 5-8, 2017, and could be a major opportunity to focus international opinion on the urgency of tackling the crisis of the oceans. For India, as a peninsular country, with a 7,500-km coastline, the conference is of particular importance.

India also has several centres of excellence such as the National Institute of Ocean Technology engaged in advanced marine research, which could make a significant contribution to international efforts to restore the health of our oceans.

It could also take a lead in this area at the Indian Ocean Rim Association and as part of BIMSTEC which covers the Bay of Bengal.

We are running out of time.

The writer is a former foreign secretary. He is currently member, Governing Board of CPR.