'The feeling is growing that if India slips in the realms of liberal tenets, it will be a tragedy not only for the country, but also for the world because it will lose a remarkable role model,' notes Amulya Ganguli.
Illustration: Dominic Xavier/Rediff.com 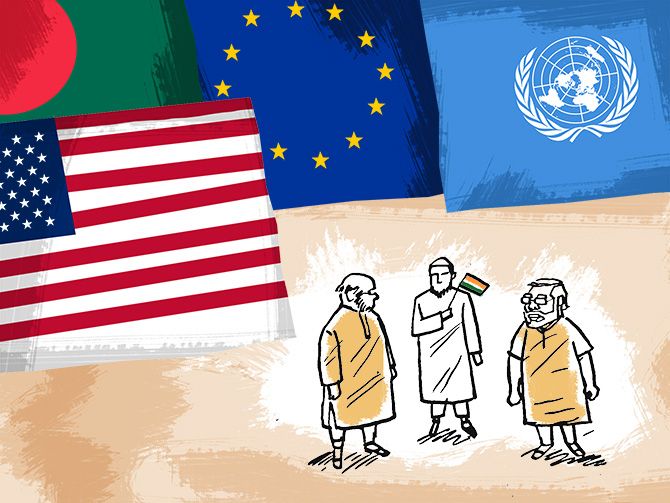 It is rare for well-meaning outsiders to tell India what it stands for.

But this is what has been happening for some time.

For instance, after cancelling a trip to India in the wake of the passage of the Citizenship (Amendment) bill in Parliament, the Bangladesh foreign minister, A K Abdul Momen, chose to remind India that it is 'historically a tolerant country which believes in secularism'.

However, this 'historic position will be weakened if they deviate from that'.

His misgivings were evidently about the divisive nature of the new law which focusses on all communities seeking Indian citizenship except the Muslims.

The UN human rights commission, too, voiced its concern about the measure with a spokesperson referring to its 'discriminatory' provisions and expressing the hope that the Indian judiciary will 'consider carefully the compatibility of the law with India's international human rights obligations'.

The European Union was also hopeful that the law will be in sync with Indian Constitutional standards while the US commission on international religious freedom argued that the legislation was taking a 'dangerous turn in the wrong direction'.

The US state department called for the "protection of the religious minorities" in India in keeping with its "Constitution and democratic values".

Four years ago, Barack Obama said during a visit to India that the country 'will succeed so long as it is not splintered along the lines of religious faith" and pointed out that Article 25 of the Indian constitution says that "all people are equally entitled to freedom conscience'.

Why these advisories on secularism, human rights and religious tolerance, including one to the judiciary to ensure that the citizenship law does not violate the country's international commitments?

Is there a fear among foreigners that India is deviating from the high standards for which it has been known and respected for many years, as the Bangladesh foreign minister said in so many words ?

If no dignitary will tell China or Saudi Arabia about civil liberties, the reason is that it will be a waste of breath.

Similarly, such counsels are not voiced in Europe because the principles that are being highlighted in the Indian context are generally respected in the West.

So they were in India.

It is only now that the fear is growing about deviations from them.

What is intriguing, however, about the anxiety that is being voiced is that there is an element of sadness about India's possible fall from grace.

The explanation for this sense of disquiet is that the world holds India to a high standard and has done so since 1947.

The reason is that India has followed a different path from that of the other newly-liberated colonial countries whose rulers quickly succumbed to the temprations of dictatorship.

India, in contrast, stuck to democracy despite its poverty of the time and reputation as a 'functioning anarchy', as the economist, J K Galbraith, said while a London Times correspondent predicted that 1967 will see India's 'fourth and last general election'.

But all the Cassandras of doom were proved wrong and India continued to be a beacon of multicultural amity for the rest of the world.

It is this image which is now perceived to be in danger.

Up until now, India was seen as something special by a sizeable segment of the intelligentsia everywhere and even in the world's chancelleries.

Now, the feeling is growing that if India slips in the realms of liberal tenets, it will be a tragedy not only for the country, but also for the world because it will lose a remarkable role model.

After all, no other nation is made up of 4,635 communities, 325 languages, 1,652 mother tongues, 24 scripts and 22,000 dialects and yet survive for centuries as a cohesive whole despite wars and famines and be the birthplace of four religions -- Hinduism, Sikhism, Buddhism and Jainism -- apart from accommodating generations of Muslims, Christians and Zoroastrians.

Little wonder, the reputed biologist, J B S Haldane, who gave up British citizenship and lived in India for some time, saw India as a 'wonderful experiment', which was a 'model for a possible world organisation'.

Another foreigner, the anthropologist Verrier Elwin, who made India his home, spoke of how it is possible in 'gentle, tolerant India... to live your own life more freely and with less interference than almost anywhere in the world'.

There is little doubt that if the two citizenship-related measures -- the new law and the proposed nationwide register of all residents -- are implemented, it will be the end of not only a gentle, tolerant country, but also of its composite culture, which has evolved 'through the ages', as Jawaharlal Nehru said, and which is a path which India 'will have to tread' to attain 'self-realisation and greatness'.

It is noteworthy that the rest of the world also thinks on the same lines as India's first prime minister and is uneasy about any deviations.

Amulya Ganguli is a writer on current affairs.
He can be reached at news@rediff.co.in