Why the US of A is on everybody's minds

The parallels between Modi's direct and indirect methods and his fan base, and those of Trump, are blinding, notes Mitali Saran. 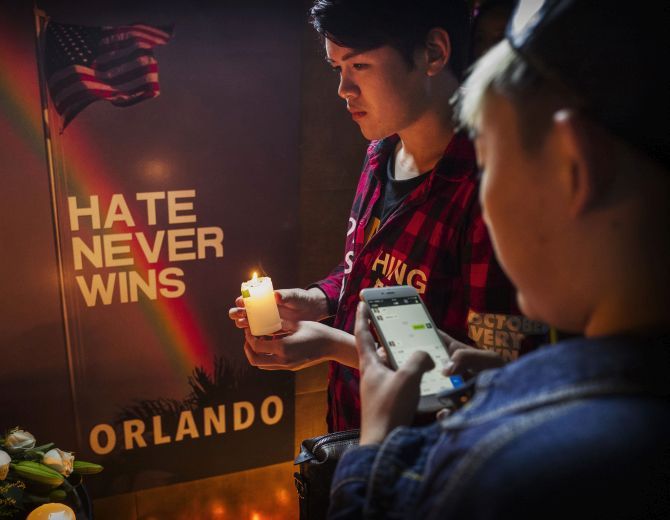 IMAGE: A memorial in Beijing for victims of the mass shooting at the Pulse nightclub, Florida. Photograph: Kevin Frayer/Getty Images

The US of A is on everyone's mind for several reasons. India and the United States do have a lot in common besides that tattered old platitude about being the world's largest and oldest democracies, a phrase so overused and hollow that it needs to be binned.

First, Orlando. Could it be that the cold-blooded killing of 49 people in a Florida nightclub -- another murderous statistic in a long line of statistics involving theatres, malls, homes and schools -- might actually lead the intractable gun lobby to soften its stance on gun control?

133
Number of mass shootings in the USA since January 2016

A much-shared status on Facebook reads: 'Congrats, murderer. You have turned the focus of the lesbian, gay, bisexual, and transgender community, one of the most powerful progressive movements, onto the crumbling edifice of one of our country's biggest problems, gun reform. I don't know if you've seen what they have accomplished in the past 25 years, but these queens get s**t done.'

Here in India, we don't need murderous gunmen to target the LGBTQ community -- the State is happy to oppress them on a daily basis by declaring parts of their sex lives illegal. The way our parliamentarians reacted to Shashi Tharoor's private bill to strike down Section 377 -- with jeers, boos, and derisive laughter -- is a national disgrace.

Bharatiya Janata Party-style development is clearly about roads, not about the people who use them.

Speaking of which, there's another reason we've all been looking across the Atlantic. Prime Minister Modi recently made his fourth visit there, and addressed a joint session of Congress, in which he said, among other things: 'For my government, the Constitution is its real holy book. And, in that holy book, freedom of faith, speech and franchise, and equality of all citizens, regardless of background, are enshrined as fundamental rights. 800 million of my countrymen may exercise the freedom of franchise once every five years. But all the 1.25 billion of our citizens have freedom from fear, a freedom they exercise every moment of their lives.'

No, really, he said that. In the rash of gushing op-eds following that speech, someone credited the PM with 'superb wit.' I assume the writer was thinking of this part -- it certainly gave me the helpless giggles. It's a masterful parody of the news in India, a kind of gallows humour. More of our comedians should leverage this variety of deadpan humour -- it's so much more powerful for its subtlety.

Americans might applaud Modi's rhetoric, but Indians have a more nuanced sense of it.

It was carefully worded -- all those freedoms and safeguards are, in fact, in the Constitution. What the PM didn't get into was that his government is ideologically shifty about the Constitution, and that when it comes to electoral strategy, his party has no problem unleashing the dogs of civil war.

He omitted the fact that elected representatives of the people are telling citizens to get out of India for holding particular views; that India is becoming a country where being seen with the wrong cow at the wrong time can get you killed; and that blunt and deadly street justice is gaining popularity under a benevolent political eye.

He didn't say anything about how NGOs are having their licences cancelled, how the police is taking political orders, how the government is happy to be with godmen who come with large companies and large vote banks.

He didn't say anything about how his MPs and ministers, party members, and Sangh Parivar sympathisers are free to spread communal poison and incite hatred between communities, particularly in the run-up to state elections. He didn't say that he himself is so busy inaugurating catchy acronyms and making statements to foreign investors, that he simply doesn't have the time to say a word in public to reassure all Indians, and to keep rabble-rousers and bullies in check.

None of that would look good to the joint session of Congress.

Americans might applaud Modi's rhetoric, but Indians have a more nuanced sense of it. It's a good thing Modi was all done and out of there when news broke, at home, that the man heading the probe into the missing Ishrat Jahan encounter case papers had allegedly tutored a witness.

It's a good thing he was long done speaking by the time news broke of allegations that an Essar employee had tapped phone conversations between businessmen, banks, and politicians, that reveal widespread corruption and influence-peddling. That wouldn't look good for the BJP's anti-corruption plank unless it cracks down on that nexus firmly, transparently, and immediately.

And, of course, the USA is on our minds because they've got an all-important election coming up, and for many observers, the parallels between Modi's direct and indirect methods and his fan base, and those of Trump, are blinding.

All I'd say to the US is this: Careful there, in November. You just never know.