59 years ago, on March 31, the man revered as the bodhisattva Avalokitesvara arrived in India, seeking sanctuary from the Chinese who had over-run his country.
'From exile in India, he keeps the Tibetan cause blazing on the world radar.'
'He could take himself very seriously indeed -- hundreds of millions of people do, after all.'
'Instead,' discovers Mitali Saran, 'he is a joyous, laughing beacon of dissent, both political and spiritual.' 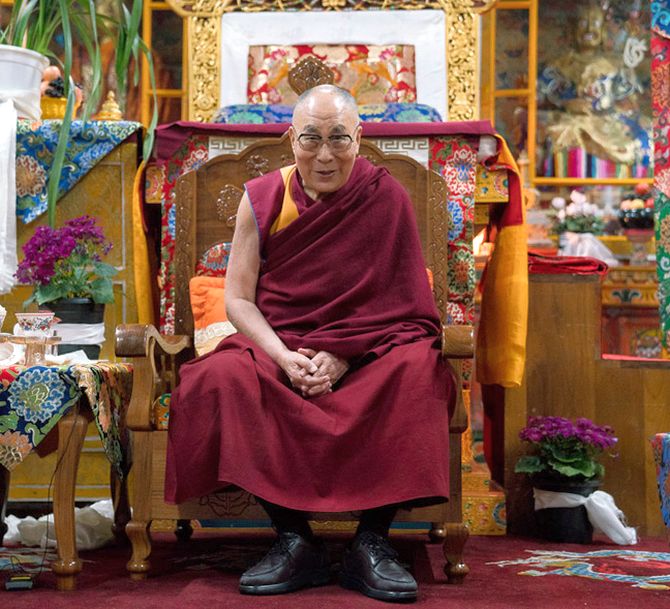 IMAGE: His Holiness The Dalai Lama.

People of consequence tend to be a bit buttoned up, but he wears his eminence -- wise learned monk, political firebrand, spiritual leader -- like the lightest of cloaks.

Everything he says comes with a gleeful "khi-khi-khi", or a hearty guffaw.

At almost 83, he jokes that after this life he might wind up downstairs rather than upstairs, "khi-khi-khi"!

He takes the most infectious delight in everything.

His ability to see the funny side of things is what makes him a truly enlightened chap, at least to my atheist eyes.

His Holiness could easily play up the gravitas.

I mean, hello, he is revered as the bodhisattva Avalokitesvara, the embodiment of compassion, who sticks around in this vale of tears to serve those who are suffering when he could perfectly well be relaxing in Nirvana.

Of all spiritual leaders on earth, of all the godmen and sadhus and cardinals and imams and rabbis and shamans, he is arguably the most loved.

From exile in India, he keeps the Tibetan cause blazing on the world radar. He could take himself very seriously indeed -- hundreds of millions of people do, after all.

Instead, he is a joyous, laughing beacon of dissent, both political and spiritual.

Like the Buddha -- that most fabulous of all old eggs -- he speaks of the vital importance of not deifying people or teachings, of not following mindlessly; of the importance of engaging in critique, questioning, independent examination, and independent practice.

He is interested in testing the old scriptures against science, and in updating them where necessary.

In other words, he's loving, humble, rational, secure, intellectually and spiritually adventurous, and he's got a wicked sense of humour.

No wonder he's so loved.

It's enough to make you want to leap into his lap and hug him forever, while making side-eyes at the dreary gargoyles who celebrate four years of buttoning up India so tightly that nobody can breathe.

All that these gargoyles seem to know how to do is bow and scrape before gods and men and scripture and each other, all the while speaking of pride; tom-tom each other's manliness and strength, all the while being too frightened to utter a word of dissent.

All they do is impose with violence what they cannot achieve with argument.

And, my god -- and please read this in a very shouty voice -- they have no sense of humour, like, none!

Everything is just so terribly sacred and pompous and self-important and fearsome and worshipful!

If they weren't such stuffed shirts, they might admit how ridiculous they are, achieving the opposite of everything they aim for.

Newsflash: You can't love your country by oppressing your countrymen. It's stupid to be proud of made-up 'facts'.

Stamping out questions is the opposite of education.

Having a huge digital surveillance system isn't the same as being modern.

You can't respect women by calling them goddesses and treating them like chattel.

You can't terrorise and kill people over cows and expect the world to admire your traditions.

You can't be pious by being hateful.

You can't enforce respect, it has to be earned.

The problem with being too serious is that you can't see when you've tipped over into absurdity.

It's just silly to puff up your chest quite so much when we're all going to end up as small piles of ashes and dust.

But you can expect everyone else to laugh until their sides hurt, because laughter is a natural response to absurdity.