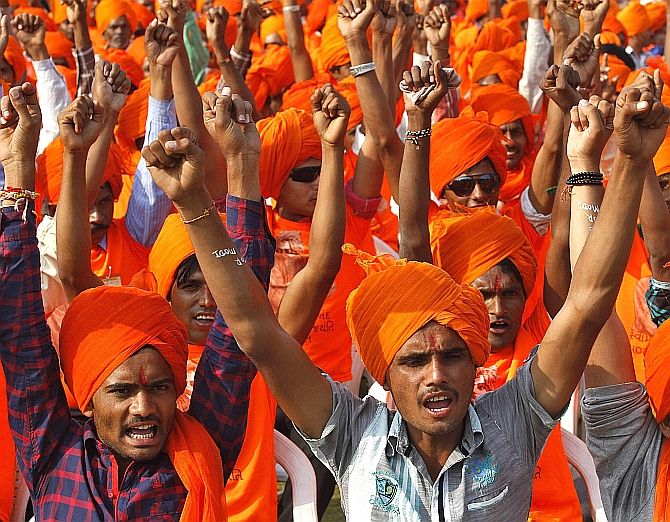 'A second defeat in a Hindu heartland state will be disastrous for the BJP's morale and political fortune.'
'There is no alternative for the BJP but to play the patriotic card with gusto,' says Amulya Ganguli.

As has been demonstrated by the decision to put on trousers in the 91st year of its existence, the Rashtriya Swayamsevak Sangh is brimming over with confidence.

The first sign of this self-assurance is declaring a new test for patriotism, the organisation's pet theme. The decree is a peremptory order to everyone to chant 'Bharat Mata Ki Jai,' if s/he is to show that her/his heart is in the right place -- and not in Pakistan.

Interestingly, the RSS has shied away from the slogan which was its battle cry during the Ramjanmabhoomi movement -- Jai Shri Ram. Perhaps it thought that the invocation of the Hindu god might run afoul of the judiciary although poet Allama Iqbal called him the 'spiritual leader of India (whose) lamp gave the light of wisdom.'

Nagpur's patriarchs could have tried some other slogans -- and may do so still in case its pitch for Bharat Mata fails to pass muster. Among such catchphrases is 'Garv Se Kaho Hum Hindu Hai' (declare with pride I am a Hindu), which was also one of the chants which reverberated around the riot-torn land in the 1990s.

Considering that RSS chief Mohan Bhagwat argues that all Indians are Hindus in a cultural sense notwithstanding their different methods of worship, there is no reason why 'Garv Se Kaho' cannot be included in the repertoire of key words which a true patriot will have no objection in uttering.

It is understandable that to Anupam Kher the chanting of 'Bharat Mata Ki Jai' is the only definition of nationalism. It will not be surprising if he isn't soon upgraded from Padma Bhushan to Padma Vibhushan.

What is surprising is that Javed Akhtar should be so vocal in favour of the slogan considering that he was once credited by grapevine with coining the 'maut ki saudagar', phrase which was used by Sonia Gandhi in the 2002 election campaign in the state although to no effect.

Now that the RSS has made it mandatory for every Indian to vociferously revere the country as the mother, there will be questions about implementation. As the suspension of a Maharashtra legislator for not following the diktat shows, that is one form of punishment.

But what of ordinary citizens? How will their patriotism be assessed? And who will do so?

Will the task be left to the police after calling Bhim Sain Bassi back from retirement to deal with the issue with the same zeal with which he booked Kanhaiya Kumar and other Jawaharlal Nehru University 'anti-nationals' for sedition?

Or will the job be entrusted to the Akhil Bharatiya Vidyarthi Parishad?

It goes without saying that the enforcement of this new directive from the RSS will not be easy if only because the judiciary may be as doubtful about the latest slogan as the old one about Lord Ram.

What is clear, however, that along with the consumption of beef, the Sangh Parivar has found a new way to make its presence felt. It is noteworthy that on the day the Maharashtra legislator was suspended, four Kashmiri students were arrested following rumours that they had cooked beef in their hostel in Rajasthan's Chittorgarh district.

The lines have now been drawn in the sand. The Hindutva version of Indian democracy lays down that it will not be enough only to stand during the national anthem or the singing of Vande Mataram, but unless one also chants 'Bharat Mata Ki Jai' and gives it in writing that he will not eat beef, ministers in the Narendra Modi government will ask the person to leave for Pakistan, as some of them have already advised beef-eaters.

The BJP's deep love for the country is probably not the only reason why these initiatives are being taken at the behest of the RSS. The party and its mentor may have also realised that the electoral tide is not running in its favour. The high water mark of 2014 has receded.

If the results of some of the local body elections in Uttar Pradesh are taken into account, the Samajwadi Party and the Bahujan Samaj Party are well ahead of the BJP. For the BJP, UP provides a must win situation since a second defeat in a Hindu heartland state will be disastrous for its morale and political fortune.

There is no alternative for the BJP, therefore, but to play the patriotic card with gusto. The need is all the greater because the sedition plank is a dicey one since it is difficult to wrap a colonial era law in the cloak of nationalism.

Hence, the master stroke of an invocation to Mother India.

Amulya Ganguli is a Delhi-based commentator on current affairs.