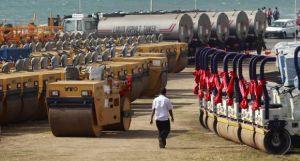 Colombo's enduring interests suggest the relationship between the Sri Lanka and China will only strengthen, says Nitin Pai.

No sooner did Mahinda Rajapaksa conceded defeat in the Sri Lankan presidential election than commentators begin to declare that the result was a blow to China's ambitions in the Indian Ocean. Facing international isolation, the Rajapaksa regime had drawn closer to China, and Beijing had used the window of opportunity to lend money, sell goods and secure huge infrastructure projects in Sri Lanka. It is estimated that China has invested $4 billion in infrastructure projects since 2009, lent $490 million in 2012 and committed another $1.6 billion last year. China's exports to Sri Lanka (14 per cent of the total) rank only next to India's (20 per cent).

During the election campaign last month, Rajapaksa's challenger, Maithripala Sirisena, attacked the China relationship (albeit without mentioning the country by name), implying Chinese investments were a ransom paid to the Rajapaksa regime and that Chinese lending would place generations of Sri Lankans in debt.

Also, after assuming office, the new government in Colombo has been vocal about rebalancing Sri Lanka's external relations to be closer to all its partners, again suggesting increasing the relative distance with China. Ranil Wickremesinghe, the new prime minister, told NDTV's Sreenivasan Jain that instances of corruption in Chinese projects would be investigated.

All this would suggest that Sri Lanka is about to execute a foreign policy change as dramatic as that in its domestic politics. Such an assessment is also likely to be dramatically wrong.

One should not take election rhetoric too seriously, and as we well know, political parties say one thing in the opposition and do the other thing while in power. While it served Sirisena well to paint Mr Rajapaksa as a sell-out to China during the campaign, it is entirely a different matter for him to renege on deals made by his predecessor. The geopolitical underpinnings of Sri Lanka's relations with China do not drastically change merely because one president is replaced by another.

Liberal internationalists in New Delhi and the West are highly likely to be disappointed when they find the new government more like the one it replaced, than a model member of the United Nations. While Wickremesinghe said that his government would engage the United Nations on the allegations against the Sri Lankan army during the war against the Tamil Tigers, he was emphatic that those charged with crimes will be tried in Sri Lanka.

That means politics. It is unlikely that an unwieldy coalition of 49 parties, some of which are hardline Sinhala nationalist, will permit significant movement on this front. Given that this issue is the cause for Sri Lanka being on the back foot internationally, Colombo's reliance on Beijing's diplomatic and economic support will continue.

Further, Russia's economic woes and Egypt's political turmoil cast a shadow on tea export revenues, while a promised wage hike for civil servants will tighten Colombo's fiscal situation. It would be foolhardy to distance China in these circumstances.

Sri Lanka's need for China is anchored in deeper, structural reasons. A small country seeking to protect its autonomy against a large neighbour will attempt to build relations with other powers in order to balance them off against each other. Previous governments in Colombo have engaged the United States, Iran and Pakistan for this reason, before China entered the picture. The quest becomes all the more acute when the large neighbour is notching high economic growth, and you need similarly placed balancers. If the Modi government restores India on to a higher-growth path, Sri Lanka's need for China will only increase -- presuming Colombo continues to prefer seeking autonomy to "bandwagon-ing" on to India.

Constructivists will challenge this realist reading by questioning whether this presumption is valid: will Sri Lankan politics throw up a situation where Colombo will prefer being an Indian satellite to fighting to preserve its autonomy? Few serious analysts will say "yes". Sinhala and Sri Lankan nationalisms, much like nationalisms in India's other neighbours, rest heavily on differentiation from India. The only way Colombo will accept being in India's shadow is if it is coerced -- and strongly so -- by New Delhi. But why would India bother to invest resources for the largely unnecessary project of subduing Sri Lanka?

In other words, even if the Sirisena-Wickremesinghe government takes some actions to investigate the Rajapaksa regime's deals with China, Colombo's enduring interests suggest that the Sri Lanka-China relationship will only strengthen in the future. No one should expect Colombo to repudiate Chinese investments and projects. Nor indeed should New Delhi expect China's military ties with Sri Lanka to weaken merely on account of Sirisena's election. It will require tough diplomacy.

In a broader assessment, from Sri Lanka's perspective, India and China are not good substitutes for each other. India cannot step into China's shoes and spread billions of dollars in order to buy influence in Sri Lanka. At least not on the same scale. Nor can it as easily overlook human rights reports and the treatment of the island's Tamil minority.

For its part, China cannot move itself into the Indian Ocean and become Sri Lanka's neighbour. This lack of substitutability gives Colombo the rationale, reason and space for engaging both. Just as its quest for autonomy gives it the motive for hedging, balancing and playing one against the other. None of this has changed after the election.

The writer is co-founder and director of the Takshashila Institution, an independent, non-partisan think tank