Why are the 'secular' parties silent about the lynchings on our streets?
Are they so busy forging political alliances that they ignore the numerous distortions of Constitutional values?
Mohammad Sajjad examines the state of India's Opposition parties three years after Narendra Modi and the BJP were elected to power. 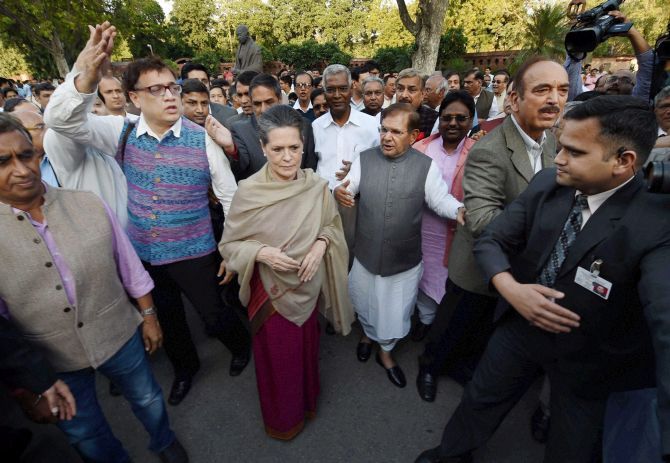 From the perspective of a deeply concerned citizen, it appears that Indian democracy is passing through its worst phase.

This became much more evident with what happened on May 18 in Jharkhand, a few kilometres away from the steel city of Jamshedpur.

According to news reports, in two different villages, because of absolutely baseless rumours, four Muslims and two Dalits were barbarically lynched by mobs, consisting mostly of tribals.

The consequent degree of outrage about these murders from civil society is woefully inadequate.

People seem to have either gone mute or so gotten used to such ghastly killings which are increasingly the order of the day across the country.

Is it indeed the 'new normal'?

Neither the Opposition nor the intelligentsia (including most of the media, a substantial section of which has already been kowtowing before the establishment) speak of the breakdown of the Constitutional machinery in the Bharatiya Janata Party-governed Jharkhand.

Nobody speaks of imposing President's Rule in the state.

No political party has come out onto the streets to protest the killings.

No opinion writer of a liberal-secular persuasion has asked the non-BJP parties to take its support base out on the streets to protest the brutality.

Not only power-seeking politicians, but also the liberal-secular intelligentsia desperately wait to stitch together a broad alliance which can dislodge the BJP from power in 2019.

Within the confines of luxurious hotels, talks on coalitions and alliances are taking place for the elections to be held two years from now.

None are prepared to come out of their comfort zones and take to the streets.

Little do they realise that mere unity from the top can no longer befool the masses in the name of secularism and social justice.

In fact, such moves of opportunistic unity at the top would create a counter-mobilisation with greater vengeance in the BJP's favour.

Mayawati has not come out onto the streets when thousands of Dalits are protesting against the atrocities in Saharanpur. Nor did Akhilesh Yadav, Uttar Pradesh's recently dislodged chief minister, join these protests from Saharanpur to Delhi, even while stating his willingness to align with Mayawati.

The leaders will bargain about coalitions for power, but they won't ask their core/captive support bases to come together to protest these lynchings on the streets.

In November 2015, after the Mahagathbandhan won the Bihar assembly election, Lalu Yadav, the darling of the secularists, boasted of camping in Varanasi -- Prime Minister Narendra Modi's Lok Sabha constituency -- to launch a mass mobilisation against the PM's unkept promises.

Lalu is now busy affirming the power base for his two sons inside the coalition government in Bihar. Yet, his support base refuses to ask him some pertinent questions. Why? It will strengthen Hindutva, they say.

By not asking such questions, they ignore the fact that they have created a vacuum which has come to be filled in by Hindutva forces.

The likes of Lalu Yadav, Mulayam Singh Yadav, Mayawati etc are extremely discredited today, yet they doggedly refuse to learn any lesson.

No traditional 'secular' party is prepared to accommodate the rising aspirations of the OBCs, Dalits, MahaDalits and other lower castes and classes. These left-out groups have been lured by the saffron forces.

Today, these traditional 'secular' forces are neither willing to nor capable of re-scripting the grammar of politics.

Even the intelligentsia has become palpably partisan. They shout against the omissions and commissions of saffron establishments, but they choose to become less shrill and less strident when they are needed to speak against the non-saffron forces.

The liberals, for instance, did not speak out against the Akhilesh Yadav regime whose police in Dadri, Muzaffarnagar, and elsewhere in Uttar Pradesh failed to uphold Constitutional values.

For citizens, even more alarming is the unwillingness of the liberal-secular intelligentsia to speak against politics which schemes to grab power through opportunistic and self-serving coalitions, negotiated in luxurious hotels.

If frequent lynching and similar atrocities across the country cannot make the Opposition come out onto the streets, then what can move them?

People are not prepared to trust the existing Opposition parties who have been cheating them for long. In the name of secularism and social justice, they have only perpetuated their dynasties.

Never before have India's Opposition parties and the intelligentsia witnessed such a pathetic crisis of credibility.

Both India's polity and society have been reduced to a bizarre binary as if no third space really exists anymore. On social media sites, it seems India has only two colours: Saffron and non-saffron.

A polychromatic India is becoming elusive.

One rarely finds someone who can simultaneously speak out against scams on all sides of politics, be it the fodder scam or Vyapam.

One set will say speaking about the fodder scam will strengthen the Hindutva forces while the other side will argue that speaking against lynching and Vyapam will bring back the regressive dynasties.

Forget the ruling elites, even citizens on social sites have become partisan and fall prey to the carefully constructed bipolarity of politics.

They will feign shameless ignorance about crimes and corruption on one side while speaking out loudly against the same on another.

They will invoke 'jungle raj' of one regime, but look away from similar or even more palpable failures of the Constitutional machinery under another regime.

If the Rashtriya Janata Dal's supporters were not shaken by the massacres of Dalits and other crimes when Lalu Yadav or his wife Rabri Devi were chief minister, saffron supporters are hardly outraged about the lynch mobs. Both enjoy(ed) impunity under the respective regimes.

While drawing this parallel, one runs the risk of being condemned for having ignored the degrees of ferocity of suffering of the victims. They must understand that one isn't ignoring the degrees. Comparisons do carry oddities.

Killers of various varieties -- be it the cow vigilantes and lynch mobs of today or those in the so-called 'Muslim friendly' regimes of Lalu Yadav, Akhilesh Yadav and their predecessors -- have always enjoyed impunity.

Yet, they manage to keep getting the votes of the victims.

In 1996, the Bharatiya Janata Party protested when Mohammed Taslimuddin -- perceived to be close to Lalu Yadav -- was appointed minister of state for home in the H D Deve Gowda government despite his dubious background.

In 2017, the same BJP selected a chief minister who faced serious charges.

One of the biggest failures of Indian democracy has been in the domain of the criminal justice system where killings in the name of identity-based hatred (against Muslims, Dalits, tribals, etc), are rarely taken to their logical conclusion.

Quite often, even well-meaning people insist on forgetting and moving on.

This is how the perpetrators of such crimes enjoy impunity and are emboldened further. These acts of 'forgiveness' embolden the thuggish hate merchants and killers.

In such a bleak scenario, why cannot the intelligentsia and media help the country?

Because even those universities, hitherto known for their anti-establishment politics and academics, are now being made to confront this crisis of credibility in an unprecedented manner.

In the 1960s and 1970s, when the hegemony of the ruling Congress had to be challenged, sections of motivated students and teachers took to the revolutionary path and joined the poor landless labourers of Bihar, West Bengal, and other parts of India.

They lived with them, they suffered for them, were imprisoned as well. As late as the 1990s, Chandrashekhar, a student leader at Jawaharlal Nehru University, rather than opt for a comfortable career in academics at elite universities chose to fight the gangster-landlord nexus in Saran, patronised by the state government.

In this act of revolution, he made the supreme sacrifice. Ironically, the state government was then controlled by someone professing his commitment for social justice and secularism.

All these sacrifices and contributions from those at these educational institutions seem to have gone in vain.

Today, motivated political forces have succeeded in unleashing propaganda, accusing those very institutions and emancipatory ideologies to be unpatriotic, seditious, and what not.

Today, even the most illiterate segments in the remotest hinterlands have been fed with lies about those institutions, that they are dens of treasons.

We should not and cannot dismiss it merely by saying that since this is the era of mass stupidity, rumours are replacing truth successfully.

There is certainly more to it. Despite so many anti-people economic measures inflicted upon the masses by this government, the Opposition parties are unable to mobilise the people against the incumbent regime.

Professor Mohammad Sajjad, who teaches at the Centre of Advanced Study in History, Aligarh Muslim University, is the author of Muslim Politics in Bihar: Changing Contours Contesting Colonialism and Separatism: Muslims of Muzaffarpur since 1857.