Utkarsh Mishra explains what Sardar Patel thought and said about the RSS. 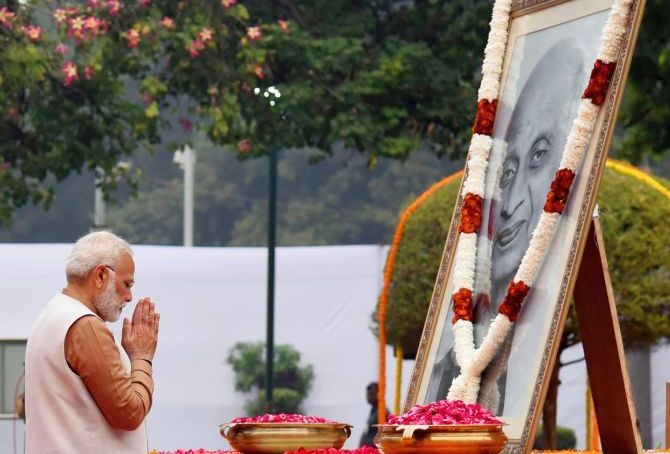 What did Jawaharlal Nehru, Vallabhbhai Patel, Subhas Chandra Bose and Bhagat Singh have in common, despite their multiple differences, and apart from the fact that they all were fighting for a free India?

It was the fact that they all despised Hindu nationalists.

Anyone saying that they were not on the same page -- even in the face of their glaring differences -- in their opposition to communal forces is being dishonest.

Sardar Patel lived and died a Congressman. He was closer to Mahatma Gandhi than Nehru was, and in all respects he was more of a Congressman than Nehru.

The irony of ironies, therefore, would be a Hindu nationalist using Sardar Patel to attack the Congress.

This is perhaps the most ironical paradox of our times. And, hence, it becomes all the more important to restate what Sardar Patel thought and said about the Rashtriya Swayamsevak Sangh and its activities.

Even before Gandhi's assassination, after which he imposed a ban on the RSS, Patel was advising the young men of the country not to follow the path of the Sangh.

'I have received complaints against the Rashtriya Swayamsevak Sangh. If so many complaints are received, the Sangh should realise that there must be something wrong. I appreciate the enthusiasm of young men, but that should be diverted into constructive channels.

'There is a great deal to be done to make India militarily strong... All that cannot be achieved by the lathis of the Sangh which are being used for breaking the heads of a handful of Muslims.

'If they (the youngsters) follow the path which the Sangh has been following, they would be doing a disservice to the country.'

In October 1947, Nehru wrote to Patel about false information being published in Hindu Outlook, a Hindu Mahasabha newspaper, about Nehru, his sister Vijaylakshmi Pandit and Patel.

In his letter, Nehru wrote, 'I am enclosing a cutting from the Hindu Outlook of the 21st October... I cannot imagine any person outside the lunatic asylum saying anything like this or believing in it.'

Patel replied in strong words, saying 'Hindu Outlook doesn't deserve to exist as a newspaper' and also informed that 'a pre-censorship order' had been passed against the paper.

In another letter to Nehru dated May 4, 1948, Patel wrote, 'Thank you for your letter regarding the recrudescence of RSS activities. We have already warned provincial governments about this danger and have asked them to take all appropriate measures.

'We are doing so again. We ourselves have been ever watchful in our centrally administered areas and have not allowed, as far as possible, anything which would have any resemblance to usual RSS activities.

'The main difficulty however is that in some provinces the high courts have been acquitting persons who were arrested in connection with the round-up of RSS men.'

On September 11, 1948, Patel wrote to then RSS chief Madhav Sadashiv Golwalkar. Though he acknowledged the RSS's 'service to Hindu society', he attacked the RSS workers for 'attacking Mussalmans'.

'Organising Hindus and helping them is one thing, but going in for revenge for its sufferings on innocent and helpless men, women and children is quite another thing,' Patel wrote.

'All their (RSS members) speeches were full communal poison... As a final result of the poison, the country had to suffer the sacrifice of the valuable life of Gandhiji... Under these conditions it became inevitable for the government to take action against the RSS.'

And these lines from Patel's letter reveal what the RSS was up to even in the face of the ban: 'We have hoped that after this lapse of time, with full and proper consideration the RSS persons would come to the right path. But from the reports that come to me, it is evident that attempts to put fresh life into their same old activities are afoot.'

Once again chastising the RSS in December 1948, Patel said 'the members of the RSS claim to be defenders of Hinduism, but they must know that Hinduism would not be saved by rowdyism'.

On February 23, 1949, Patel addressed a gathering in Madras, one of his two speeches whose recording is available on YouTube.

Talking about the RSS activities, he said, 'We in the government have been dealing with the RSS movement. They want that Hindu Rajya or Hindu culture should be imposed by force. No government can tolerate this.

'There are almost as many Muslims in this country as in the part that has been partitioned away. We are not going to drive them away.

'I have made them (the RSS people) an open offer: 'Change your plans, give up secrecy, eschew communal conflict, respect the Constitution of India, show your loyalty to the flag and make us believe that we can trust your words'.'

In July that year, Patel's address in Travancore contained these memorable lines which are poignantly relevant even today:

'Do not be led away that Hinduism is in danger. Hinduism can never be in danger in India... when I hear some people talking about Hinduism in danger, I feel that they are going a wrong way.

'Do not indulge in scare-mongering for selfish ends. Do not employ wrong methods for catching votes or forming the parties.'

These words prove that one cannot be an RSS pracharak and a 'disciple of Sardar Patel' simultaneously.