Why objections to the Vande Mataram are not valid 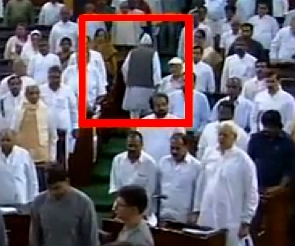 In a pluralistic society like India it is imperative that religious fervour be tempered to suit the common good, say Vivek Gumaste.

It was an act of crass insensitivity; a deed deliberately designed to raise the hackles of all right minded Indians; a cruel, blatant affront to the Constitution of India made doubly noxious by its inaction on the hallowed floor of the Lok Sabha, the fountain head of our pluralistic democracy.

Bahujan Samaj Party MP Shafiqur Rahman Burq by walking out of the Lok Sabha while the official national song Vande Mataram was being played exhibited the ugly recrudescence of a persistent malady that continues to afflict a small section of the Muslim community, namely one that pits nation against religion.

The million dollar question that cries out for a response is whether this unsavory infraction carries any iota of justification. Is this protest based on a factual interpretation of the Vande Mataram? Is there a sound logic underlying this protest or is this nothing more than a fallout of a jaundiced perception intentionally hyped up to pander to extremist elements in order to stoke discord in our society?

Why do some Muslims find Vande Mataram objectionable? The answer lies in its supposed anti-Muslim fervour. Certain clarifications, however, are in order before one confers validity to this conclusion. The song itself does not contain a single syllable that is derogatory to Muslims or Islam. To be precise, the words Islam and Muslim do not figure in the text at all.

Vande Mataram’s culpability stems not from its intrinsic demerits but is a notoriety extrapolated by its inclusion (the first two verses were penned years earlier) in Bankim Chandra Chatterji’s revolutionary novel Anandamath. Even this charge of guilt by association is a nebulous one as a careful reading of the novel indicates. Set in famine ravaged Bengal of 1770’s, the novel outlines the horrific atrocities perpetrated by the Muslim Nawab and the peasant rebellion that it sparks. The anti-Muslim sentiment voiced in the narration is an artistic depiction of robust native resistance to cruel alien subjugation and cannot be interpreted in literal terms as a Muslim-specific castigation. Firming this belief is the subsequent avatar of Vande Mataram as a rousing popular battle cry of the Indian freedom movement against British oppression.

Maulana Azad, the noted freedom fighter and Muslim scholar found nothing repulsive in singing the Vande Mataram. Both Mahatma Gandhi and Jawaharlal Nehru who can hardly be accused of nurturing Muslim phobia were perplexed by this illogical opposition to the Vande Mataram, which was without a doubt India’s first choice for the national anthem.

In an article in Harijan dated July 1, 1939, Gandhi wrote: “…No matter what its source was and how and when it was composed, it had become a most powerful battle cry among Hindus and Musalmans of Bengal during the partition days. It was an anti-imperialist cry. As a lad, when I knew nothing of Anandamath or even Bankim, its immortal author, Vande Mataram had gripped me, and when I first heard it sung it had enthralled me. I associated the purest national spirit with it. It never occurred to me that it was a Hindu song or meant only for Hindus… It stirs to its depth the patriotism of millions in and outside Bengal. Its chosen stanzas are Bengal’s gift among many others to the whole nation.”

Nehru dittoed Gandhi’s feelings with this statement made to the legislative committee of the Constituent Assembly on August 25, 1948: ''It is unfortunate that some kind of argument has arisen as between Vande Mataram and Jana Gana Mana. Vande Mataram is obviously and indisputably the premier national song of India, with a great historical tradition, and intimately connected with our struggle for freedom. That position it is bound to retain and no other song can displace it. It represents the position and poignancy of that struggle, but perhaps not so much the culmination of it. In regard to the national anthem tune, it was felt that the tune was more important than the words... It seemed therefore that while Vande Mataram should continue to be the national song par excellence in India, the national anthem tune should be that of Jana Gana Mana, the wording of Jana Gana Mana to be suitably altered to fit in with the existing circumstances.”

This recantation of history also serves to emphasise the accommodative approach of the Indian government. Despite finding no merit in the Muslim objection, and in an action that overruled majority opinion, the government thought it appropriate to reject Vande Mataram’s rightful claim to being the national anthem. Vande Mataram was accorded secondary status as a national song, that too in an edited form to accommodate Muslim sentiments.

Current protests not only ignore this magnanimity but also suffer from a gross factual deficiency.

With regard to paying obeisance to the motherland, Shafiqur Rahman Burq notes: “Vande Mataram is an ode to motherland. Muslims like me bend only before Allah, not before any other god."

But again this is a subjective interpretation that not all Muslims agree upon. In November 2009 when Muslim clerics from Deoband issued a fatwa against the singing of Vande Mataram, Gujarat’s first Muslim Director General of Police, S S Khandwawala  countered their stance with this riposte (Indian Express, November 15, 2009):

“I give a salaam to my mother every day before I leave home and also to my motherland...When we offer namaaz, we bow down and kiss the ground, which itself is a salute to the motherland. Religion never prevents a man from respecting his motherland….If Hindus consider land as mata (mother), then giving respect to the land is the duty of a true Muslims… not hurting the sentiments of others and respecting all religions equally is also a Muslim’s duty…”

The Muslim community must take their cue patriotic Indians like Khandwawala.  In a pluralistic society like India it is imperative that religious fervour be tempered to suit the common good.