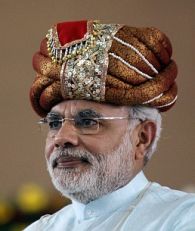 Modi will be the single most significant cause of the Congress’s victory in 2014, despite 2G,  coalgate, Commonwealth Games and all the other scams he has forgotten, says A Ganesh Nadar

The BJP’s most liberal face, the Bhishma Pitamaha of Indian politics, was the prime minister of India thrice. He formed the government thrice. The first one lasted 13 days, the second one lasted 13 months, and the third one lasted its full term.

So why was he denied a fourth term?

He was and is still rated as one of the best prime ministers the country has had. People still praise him when they travel on the Golden Quadrilateral and also feel that going nuclear and winning the Kargil war were his highlights. Wonder what he would have done over the Chinese incursions had it happened on his watch?

Anyway, coming back to the question, why was he denied a fourth term? The answer is Narendra Modi, who was the single major cause of Vajpayee losing the 2004 elections.

If Vajpayee had handled the Gujarat crisis the way he handled everything else, firmly, the Congress would never have won the 2004 elections. Vajpayee did not even have to dismiss the Gujarat government. All he had to do was ask Narendra Modi to step down and install another BJP leader who would have dealt with the 2002 riots firmly and immediately.

Nero was fiddling while Rome burnt, and Vajpayee was feeling sad because Gujarat was burning. Feeling sad never helped anyone, and it certainly did not help Vajpayee. He was bundled out in 2004 and never recovered after that.

Let us fast forward to 10 years later, 2014. The very man that caused Vajpayee’s electoral debacle is now going to lead the party in the elections next year. The Congress should be happy, and not nervous. They should be celebrating instead of whimpering.

Even the most popular leader of the BJP, Vajpayee, could not reach the 200-figure mark in the Lok Sabha. So Narendra Modi reaching that figure is even more remote. Furthermore, Vajpayee had the benefit of his lifelong friend Advani running both the party and the home ministry. And the first thing Modi has done is to alienate Advani.

Vajpayee, realising that the BJP had reached its zenith as far as the numbers it could win on its own was concerned, maintained a very good rapport with his allies who recognised that Vajpayee was fully capable of keeping the lunatic fringe of the Hindutva brigade and the interfering RSS at an arm’s length.

Modi, on the other hand, is out and out an RSS man, and the lunatic fringe as far as he is concerned is not in the fringe but form his main supporter base.

Let not the BJP forget that one of the reasons it lost in Karnataka was the Bellary brothers, and the other was the lunatic fringe that beat up young women on national television and also burnt down churches. The Congress has also not realised that the BJP lost the Karnataka elections, they (the Congress) did not win it. Cut to 2014, the Congress does not need to win, Narendra Modi will do it for them.

Once again back to 1999, when Vajpayee formed a government that lasted its full term. His allies were:

Let us see how many of them will support Modi. The DMK will not, as Jayalalithaa and he are well known friends. The TDP still nurtures a third front dream as it was the chairman of the original one. About the Biju Janata Dal, we all know what it did to the BJP before the last assembly elections in Orissa.

The Samata Party after George Fernandes is a non-starter. The Akali Dal will stay. The fiery Mamta is now the chief minister of Bengal, a much bigger state than Gujarat -- she will not bow down to Modi’s kind of politics. The Shiv Sena will stay, the PMK, Lok Shakti, MDMK, HVP, JP are irrelevant in their own states, leave alone the Centre. The MNF and the SDF can contribute two MPs.

Now let us look at the parties who have been in the NDA and left it at various times for different reasons.

The Jharkhand Mukti Morcha (alliance in Jharkhand with the BJP) -- might come back to the fold if all cases against its leaders are withdrawn.

The National Conference – will not come back with Modi at the helm. The only reason they were in NDA was because of Vajpayee’s larger than life image and also known ability to control the Hindutva extremists.

Lok Janshakti Party -- withdrew following the 2002 Gujarat riots and expecting them to join the alliance with Modi at the helm of NDA is zilch.

All India Anna Dravida Munnetra Kazhagam will be Modi’s biggest ally as Jaya and he share a personal equation. Modi will have to remember that this particular ally pulled down his party’s government by one vote in 1999.

Another feather in this alliance’s cap is that after the 2004 elections, when the AIADMK was again allied with the BJP, it walked out the minute the BJP lost. Talk about fair weather friends.

The Lok Dal left due to seat sharing disagreements during the Haryana assembly elections in 2009. Might come back, if they are given plenty of seats.

The Rashtriya Lok Dal led by Ajit Singh might come back if promised the agriculture ministry; after all he is the son of well-known kisan leader Chaudhary Charan Singh.

Gujaratis are enterprising, they are hard-working and they are born to do business. Talk to any Gujarati and you will realise that. Gujarat would prosper under anyone, except maybe Lalu Yadav.

Modi cannot hog all the credit for Gujarat’s development. It’s the people.

Hindus are a tolerant people. They have absorbed and assimilated more religions, cultures, languages, creeds, castes, races than any other religion in the world. They have hundreds of temples where they worship thousands of gods. Naturally, they love religious diversity. They will never vote for a Hindutva firebrand leader; nor will they vote for the Gujarat model, that is meant for the hard-working Gujaratis, not all Indians.

Narendra Modi sir, your magic will work, it has worked in a limited space, but it will not work across the whole country.

You will be the single most significant cause of the Congress’s victory in 2014. That will be despite the 2G scam, the coalgate scam, Commonwealth Games scam, and all the ones that I have forgotten.

Narendra Modi sir, the scams make me feel disgusted with the Congress but you, sir, scare me.

You will scare the voter into the arms of the Congress, and the Congress does not even realise it.