'Modi's first foreign trip at the very outset of his second term as PM reinforces a growing impression that this regional tour underscores a shift in emphasis in India's foreign policy that was traditionally focused on the northern tier of countries to the Indian Ocean rim,' explains Ambassador M K Bhadrakumar. 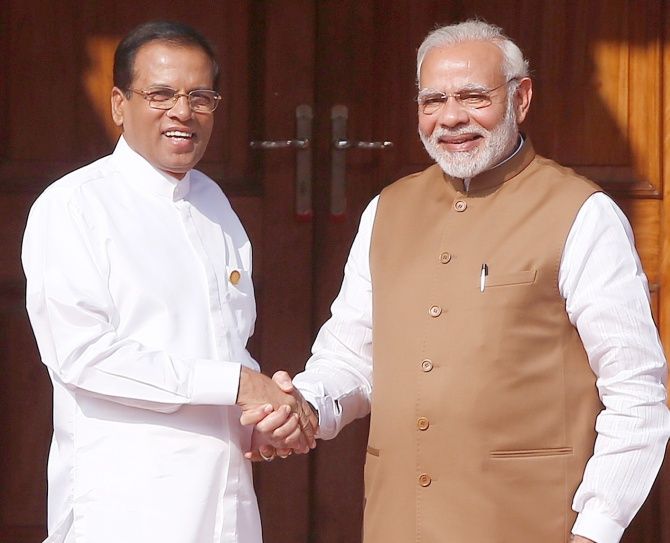 Foreign Secretary Vijay Gokhale's customary briefing to the media on Prime Minister Narendra Damodardas Modi's visit to the Maldives and Sri Lanka on June 8-9 highlighted that the event 'underlines the continued emphasis that the government lays on the Neighbourhood First policy.'

The MEA's subsequent press release, on the other hand, amplified that PM's visits to the Maldives and Sri Lanka 'will demonstrate the priority India attaches to its 'Neighbourhood-First Policy' and the SAGAR Doctrine.'

For the benefit of the uninitiated, the SAGAR Doctrine refers to Security And Growth for All in the Region -- a coinage of 2015 by the Modi government aiming to keep the Indian Ocean region 'peaceful and secure'.

It is a codename for containment of Chinese naval presence in the Indian Ocean.

Taken together, the above labelling of Modi's first foreign trip at the very outset of his second term as PM reinforces a growing impression that this regional tour underscores a shift in emphasis in India's foreign policy that was traditionally focused on the northern tier of countries to the Indian Ocean rim.

One may say it reflects a 'geographical pivot' in India's regional policies away from the Eurasian landmass (Russia) -- to borrow and improvise upon Halford Mackinder's famous expression.

Indeed, Mackinder had stated that a nation in control of the Heartland had the potential to 'command the world.

The Heartland theory had great political ramifications in modern history.

In the celebrated paper Mackinder presented to the Royal Geographical Society in London in 1904 titled Geographical Pivot of History, he stated that the world's terrestrial surface was segmented into three basic geographical regions which are the outlying islands, the offshore islands, and the World-island.

Arguably, the theory as such may seem impractical in a modern perspective.

On Mackinder's map, China is a constituent of the World-Island as indeed the other major global powers including the EU and Russia -- and India!

At any rate, through the past decade or decade-and-a-half, India began redefining its complex security planning as part of the Rimland, the coastal lands of the Indian Ocean.

The SAGAR Doctrine approximates closely with the famous Rimland concept propounded in the early 1940s by Professor Nicholas John Spykman, the Dutch-American geographer-academic at Yale University, which, of course, provides the intellectual construct for American national security policy in the 21st century.

Spykman was a balance of power realist who argued that the ocean would become a highway, not a barrier, to foreign invasion or, more likely, to economic strangulation, and political intimidation and subversion.

There is nothing new about the balance of power logic, but Spykman provided a conceptual map. Thus, the Modi government's principal security concerns have come to be focused on the 'Rimland' of Eurasia -- specifically, in the Middle East, and continental South, Southeast, and East Asia.

Effectively, the SAGAR Doctrine dovetails with the US's Indo-Pacific strategy, which in turn is riveted on Spykman's Rimland.

From such a perspective, the gravest threat to balance of power in the South Asian region would occur if a single power such as China by itself or in a coalition of regional powers (such as Pakistan, for instance) dominated the Rimland.

Thus, the argument goes, India can no longer afford to hang back and see how events developed in Sri Lanka or the Maldives, but must become actively engaged during peacetime.

Fortuitously, India's lead partners in the contemporary Indo-Pacific setting -- the US and Japan -- would align with it to counter any hegemonic threat, notwithstanding differences in their overall political orientation.

This power-political challenge of creating an anti-China dyke in the Indian Ocean is becoming the centrepiece of Delhi's strategic calculus.

The effort seems manageable as of now since the challenge is not so overwhelming, although a constant near-war state of readiness and advanced planning is necessary to avoid an otherwise inevitable defeat.

But the devil, as always, lies in the details.

A sustainable equilibrium needs to be worked out in terms of India's strong points and, secondly, a balancing is needed between the military-strategic component and the political, economic or cultural dimensions.

Above all, it is far from clear whether Indian nationalism (and Hindutva ideology) would trump or reinforce what the policymakers are strategising.

The foreign secretary adopted a noticeably guarded tone when he switched from the PM's visit to Male to what is essentially a stopover in Colombo.

Again, the PM's own departure statement was also distinctly more euphoric about the Maldives.

The crux of the matter is that unlike in India's relations with the Maldives (which has a population that is less than half a million and with an inchoate sense of nationhood), nationalism is outside the scope of strict geopolitical analysis when it comes to the Sri Lankan situation.

The problem with erecting the dyke of containment in the Indian Ocean is that China too will be constantly in an attempt to breach it and in this case, India should be willing to commit significant resources.

Also, there is always the gnawing worry that Indian's extra-regional partners -- the US and Japan -- might for their own reasons at any given point become at some point too weary, bored, or disinterested to wage the long twilight struggle.

Both the US and Japan have dynamic relations with China, too.

The new External Affairs Minister S Jaishankar made an audacious remark on Thursday in New Delhi that as the largest country in South Asia, India has the responsibility to do more to incentivise cooperation in the neighbourhood.

'We don't need it to always be reciprocal,' he said.

But the point is, the strategic contribution and positional advantages brought to the table by Sri Lanka or the Maldives as Rimland states will be next to nothing.

Therefore, all factors taken into account, wouldn't it be a balanced and economical approach -- and a prudent strategy -- to at least try out the 'China-India-Plus One' approach before damning it and hitching wagons to the US's Indo-Pacific strategies? The foreign secretary's summing up at the briefing left the answer to this question suspended in the air. To quote him,

'I don't think we should see our cooperation with any country in our region as necessarily having some ulterior motive or being directed against another country or being part of some grand strategy.'

'I think our objective is that infrastructure development in our region benefits our economy and the economy of that country.'

'We recognise that we have limited capabilities, within those capabilities we are making all efforts bilaterally but when major foreign investors like Japan are also willing to join projects which are of our national interest, we have no objection in doing it with them.'

'This is a model I can say you will see not just in Sri Lanka but in the coming days in a couple of other neighbouring countries as well.'

In a sober reckoning, India ended up feeling short-changed after all the Herculean efforts it undertook for the regime change in Sri Lanka in January 2015.

We are still 'talking to the Sri Lankan side' regarding Mattala airport.

Even the agreement signed recently between Sri Lanka, Japan and India on the East Terminal Container Terminal of Colombo Port is in reality only a 'trilateral arrangement' where 'we are in the start of a process' as regards negotiating the scope of the port, the manner of the financing, the time line and so on.

On the other hand, the Indian thrust to quickly build on the favourable climate in Male following Ibrahim Solih's election victory last November is truly impressive.

Much ground has been covered in not only stabilising the relationship, but also in building the sinews of an interdependency that guarantees predictability and stability. The MEA has done a commendable job.

Sri Lanka poses a foreign policy riddle wrapped in an enigma and a full spectrum plan of action with regard to the Rimland will have to wait till next year until the outcome of the presidential election in December is known and the political transition is successfully accomplished in Colombo.